Main Hall: upon entering the new Brooklyn Heights Library, visitors will be met with a welcome desk in a brightly lit double-height space filled with books, seating and a new reading circle. The Main Hall stretches from Cadman Plaza to Clinton Street. 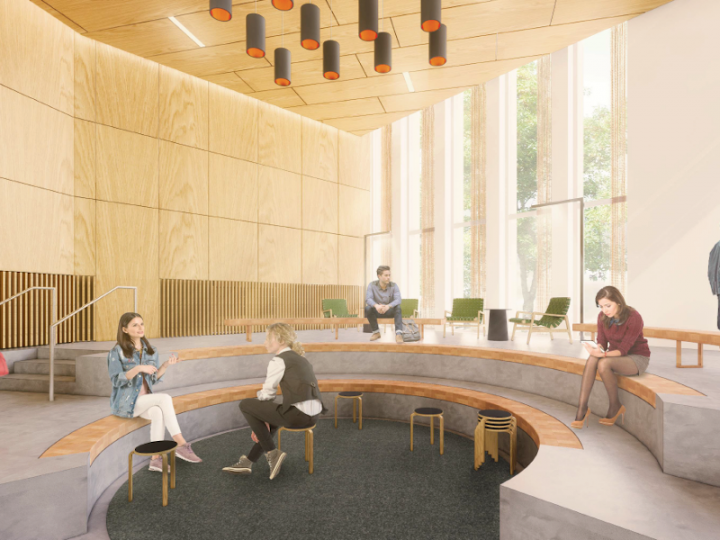 Reading Circle: on the opposite end of the Main Hall is the reading circle, built as a casual space for working, socializing or reading. This circle will also provide an informal space for programs, complementing the meeting rooms and multipurpose rooms. 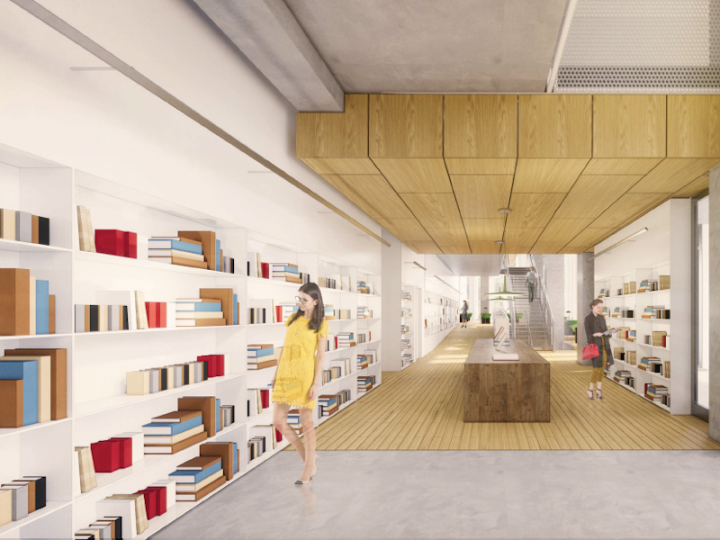 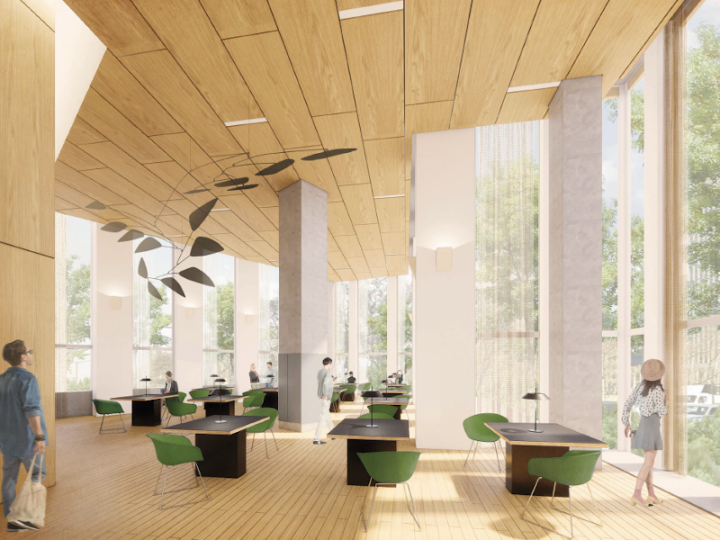 Reading Room: removed from the activity of the entryway and Main Hall, the dramatic and light-filled Reading Room will overlook both Clinton Street and Cadman Plaza. The Reading Room was designed at the community’s request for a quiet part of the library. 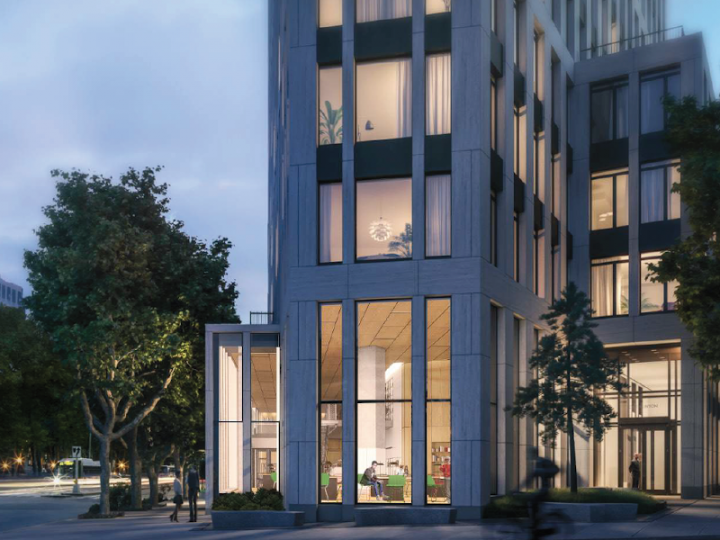 Reading Room at Night: viewed from outside, the new library’s reading room will sit in the prow of the building, surrounded by three walls of glass looking out to Cadman Plaza and Clinton Street.

Teen Space: heading upstairs, the Mezzanine level will feature an expanded teen area. With bookshelves lining the walls and featuring the latest technology, the teen space will be comprised of areas for individual and group activities. 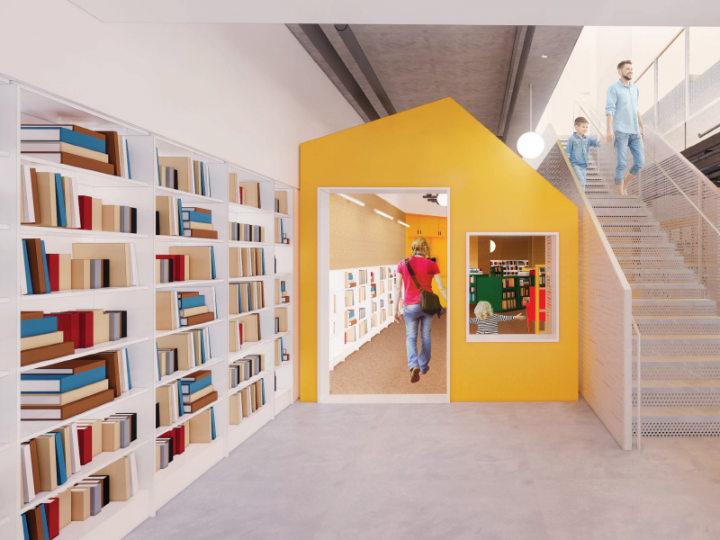 Children’s Area Entrance: the main focus of the lower level will be our dedicated children’s area, with shelves of books, play spaces, learning spaces, and a special craft area. These spaces will accommodate a variety of uses at different volumes.

Due to COVID-19, the timelines and other information on this page may not be up-to-date.

We’re building a new library in Brooklyn Heights. At over 26,000 square feet, the new library will have more public space than any other branch in Brooklyn and a bright, open design with flexible spaces for books, programs and technology.

The new, City-owned Brooklyn Heights Library will anchor a mixed-use building topped by market-rate condominiums, developed by Hudson Companies. This project will generate $40 million for repairs at other branches in Brooklyn and create over 100 affordable housing units in Brooklyn’s Community Board 2.

After a two-year public process, this project was approved by Community Board 2, the City Planning Commission, the New York City Council and the Brooklyn Borough Board. After a pandemic-related pause, construction is underway and expected to finish in Summer 2021.

Across the system, BPL's 60 libraries have an estimated $300 million in unmet capital needs. Nearly every one of BPL's branches has maintenance issues. We need to replace HVAC systems, boilers and roofs, make safety and security enhancements, and embark on interior renovations, among countless other projects. Unfortunately, BPL receives an average of only $15 million a year from the City to maintain its buildings.

Out of all of BPL's libraries, the Brooklyn Heights branch faces some of the greatest capital challenges. Built in 1962, it has more than $9.2 million in unfunded needs, including an estimated $3.5-$4.5 million to replace a non-functioning HVAC system. Additionally, the building is poorly designed and has an inefficient floor plan that hinders public service, with more than 50% of its space is unavailable for public use.

To address these challenges, BPL pursued a unique opportunity in Brooklyn Heights that will:

The developer's purchase price is $52M. This figure does not include the cost to build the core and shell of the new branch, the cost to fit out the interim branch during construction, or any rental fees incurred during that period – all of which will also be paid for by the developer. We anticipate the fit out of the new Brooklyn Heights branch to cost approximately $12M, leaving approximately $40M in proceeds to fund capital projects in other branches throughout Brooklyn.

Proceeds from the project will address a significant portion of Brooklyn Public Library’s $300M in outstanding and unfunded capital needs. The overall outstanding critical need of each branch, the opportunity for comprehensive upgrades, and geographic equity were all considerations in the allocation of these funds.

Projects to be funded include:

This funding will in turn free up BPL's annual funding for projects in other branches throughout the borough.

The Business & Career Center relocated to Central Library in June 2016, increasing hours of service by over 30%. This new location offers all current B&CL services—plus access to Central Library’s resources—in a more accessible location to all of Brooklyn.

BPL has long planned to relocate the B&CC to Central Library. Jobseekers and entrepreneurs, many of whom live and work outside the downtown Brooklyn area, can now enjoy the expanded hours, more resources, and modern work and study spaces that Central Library provides. Many of the B&CC's programs take place in the Shelby White and Leon Levy Information Commons, BPL's newest space for collaborative learning.

The new Brooklyn Heights Library will host a 3,000 square-foot, technology-rich workspace designed to meet the needs of the 21st century workforce in Brooklyn Heights. The area will offer collaborative meeting spaces for specialized trainings and one-on-one consultation services, as well as computers and productivity tools for the business and creative communities.