We who work at the library spend a lot of time thinking about technology – not just because we have public computers and thereby get a lot of questions about navigating them, but also since we watch the everyday life of library users as well as our own become transformed by digital environments. Big data? Online surveillance? Platform monopolies? Predictive policing? Algorithmic bias? Attention hacking? Just reading the headlines of the day makes it clear how society is grappling with how policy, law, and social norms are keeping up with (or not) the digital tools that we’ve become so accustomed to.

Of course you can just scroll your Twitter feed for a few hours to get steeped in the non-soothing rhythms of digital living and how people feel about it, but sometimes it's nice to curl up with a good book about our modern era.

Click Here To Kill Everybody: Security and Survival in a Hyper-connected World -- Bruce Schneier is a security expert who writes engagingly about digital privacy and where our society is at. His latest book looks at the “Internet of Things” – which is made up of items including the four-wheeled computer that you drive, the computer in your kitchen that keeps your food cold, and even the computer helping your heart beat – and what needs to happen before a dystopian vision of insecure technologies running rampant in the physical world actually comes to pass.

Weapons of Math Destruction: How Big Data Increases Inequality and Threatens Democracy -- Cathy O’Neil worked in corporate finance before moving into academia and sharing her expert critique of “big data” with us. If you’ve wondered about what could happen to you when your personal data is all over the internet (in ways you often can’t control as an individual), this book goes towards demonstrating the real risks. 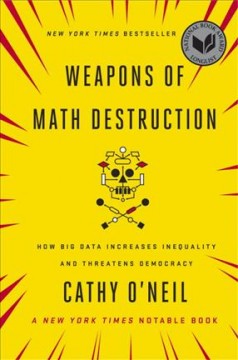 Automating Inequality: How High-tech Tools Profile, Police and Punish the Poor -- Virginia Eubanks looks at a few recent case studies to further show the dangers of overreliance on data and algorithms by governments, social services, and private industry. Her book can inspire everyone from technologists to legislators to ordinary people to do their part to prevent these consequences – it’s not too late.

The People's Platform: Taking Back Power and Culture in the Digital Age -- It shouldn't really take any reminding, but sometimes the utopian rhetoric of "the internet" makes us forget that humans are still humans even online, and sexism, racism, and other oppressions are present on digital platforms just as they are in tactile life. Astra Taylor writes about this phenomenon as well as copyright and compensation at a time when culture is "free."

Whitney Phillips goes further into the toxic parts of the internet, where harassment and abuse is enabled by the online environment in This Is Why We Can't Have Nice Things : Mapping the Relationship Between Online Trolling and Mainstream Culture

And remember that long, troubling essay a couple of years ago about the violent and perverted universe of YouTube videos for kids? It was by James Bridle, and he has a whole troubling book about the internet: New Dark Age: Technology, Knowledge and the End of the Future

Twitter and Tear Gas: The Power and Fragility of Networked Protest -- Zeynep Tufekci writes frequently about platforms and society. As the title of her book implies, social movements are influenced - but not predetermined - by the affordances and limitations of digital technologies.

Memes to Movements: How the World's Most Viral Media is Changing Social Protest and Power -- An Xiao Mina also looks at social movements around the world and the role that memes play in their functioning and their spread.

If you’re interested in pursuing any of these topics further, check out what’s happening in the Info Commons.

Melissa Morrone manages the Shelby White and Leon Levy Information Commons at BPL’s Central Library and has edited Human Operators, a book about libraries and technology.