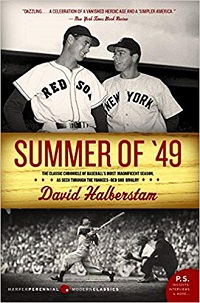 Spring is here (according to the calendar, if not always the thermometer) and with it also the return of baseball season. Of all the major professional sports, baseball probably has the greatest sense of history surrounding it, going all the way back to the 19th-century when the game was played with what now seem like absurdly small gloves and catchers didn’t even wear masks. Through the years the game has changed in many ways and there can seem to be a world of difference between the days of Ty Cobb, Babe Ruth and Jackie Robinson and the highly analytical game of today. But whatever the era, the drama underlying the contest of pitcher versus hitter remains the same.

In keeping with the season, here are a few suggestions for books that will bring back some memories of baseball days gone by and hopefully inspire you to get out to the ballpark to create some new memories.

And if all this baseball writing makes you feel like spending more time with your fellow fans, please join us for our monthly Sports Discussion Group at the Central Library. It’s a great chance to share stories, ideas and trivia about baseball or whatever sport is close to your heart. The next meeting is Thursday, April 18th at 2:00pm (more information here).