Sunset Park is home to one of Brooklyn’s busiest libraries, with attendance and circulation that rank near the top of Brooklyn Public Library’s 59 branches. At 12,200 square feet, the previous branch was too small and too outdated to meet the needs of the patrons who depend on its collection and services. Sunset Park Library required more than $6 million in repairs. Its air conditioner was broken and had been replaced by loud portable chillers that did a poor job of cooling the branch on hot days. There were only 12 electrical outlets available to patrons, and too much of the library’s space was unavailable to the public.

At almost 21,000 square feet, the new Sunset Park branch will be nearly twice as large as the previous one. The new library will be everything that the previous one was not: bright and comfortable, with an open, flexible design and up-to-date technological infrastructure. Its essential components, including the HVAC system, will be brand-new.  And the building will be topped by 49 units of permanently affordable housing.

Our partner in the Sunset Park Library project, the Fifth Avenue Committee will pay for the core and shell of the new, expanded branch. BPL will be responsible for outfitting its interior, using proceeds from the redevelopment of Brooklyn Heights Library. 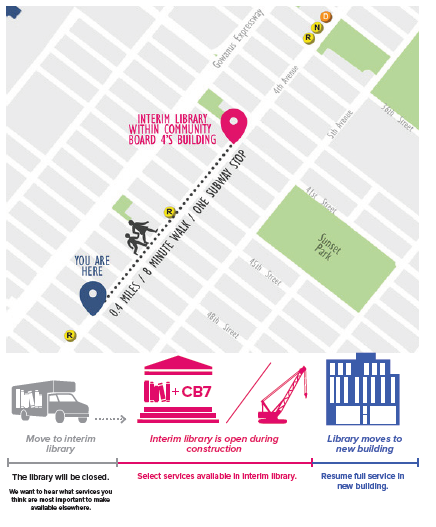 Interim library service is being provided at 4201 Fourth Ave (at 43rd street), in space made available by the New York City Police Department. 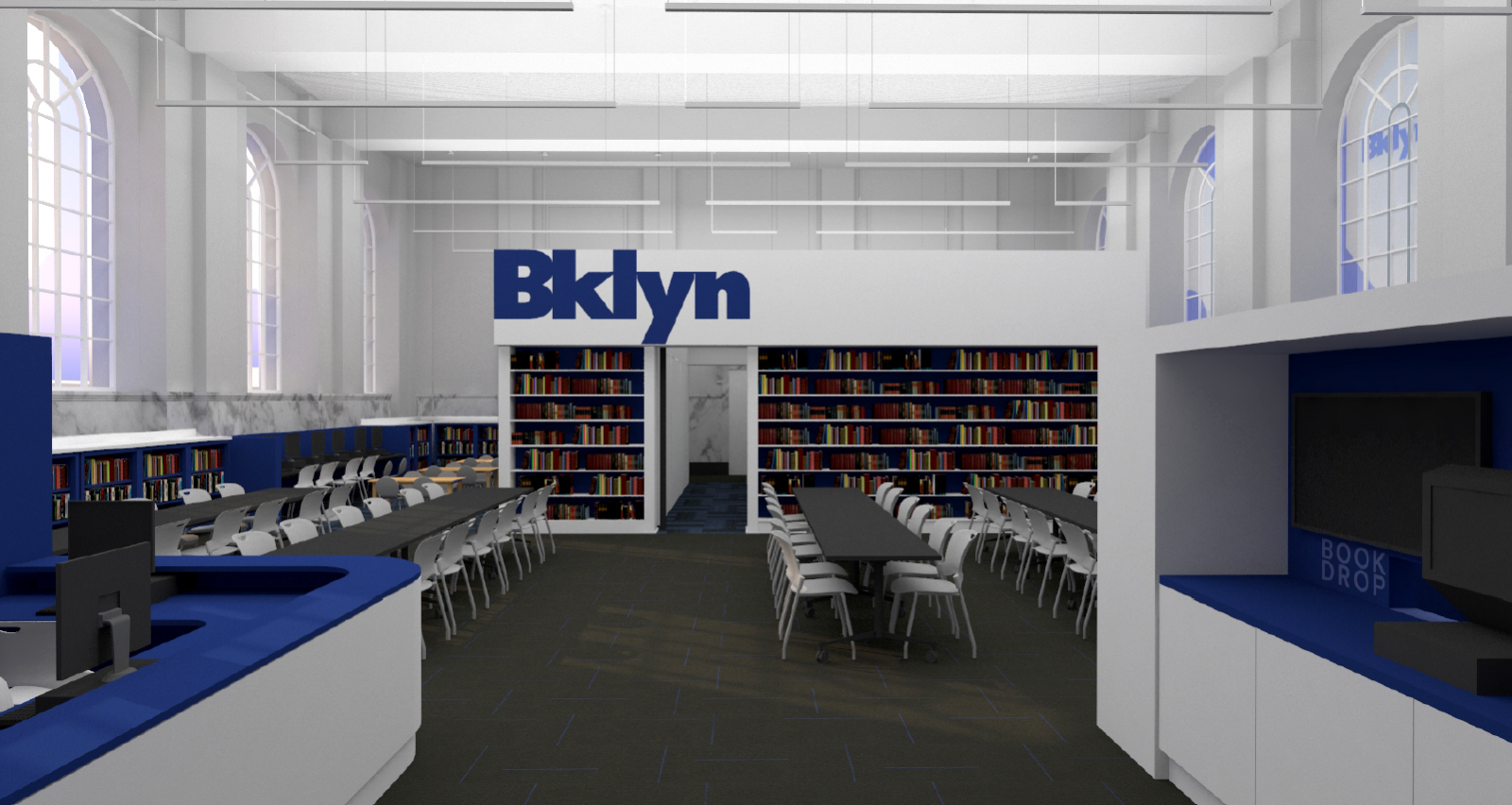 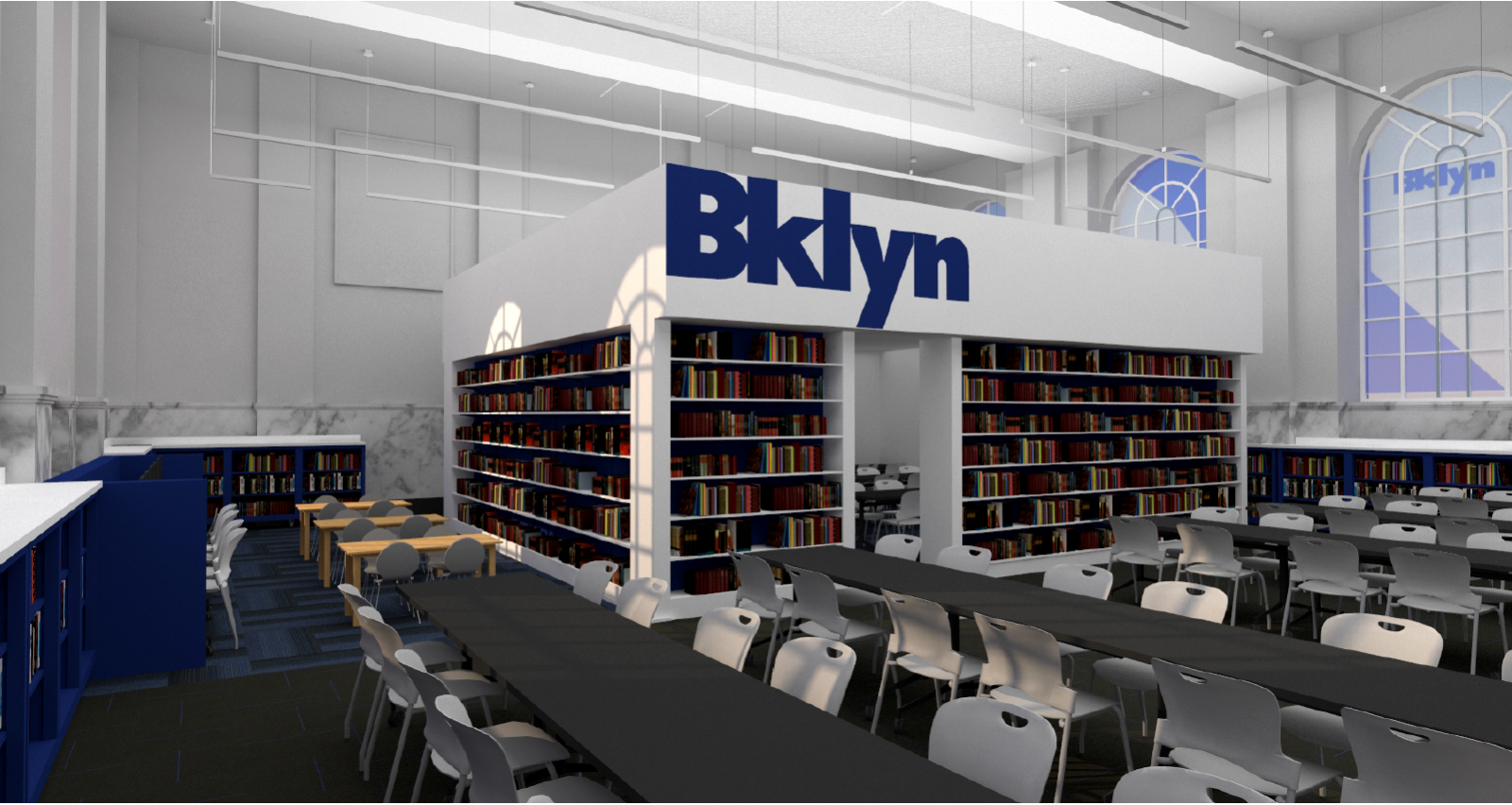 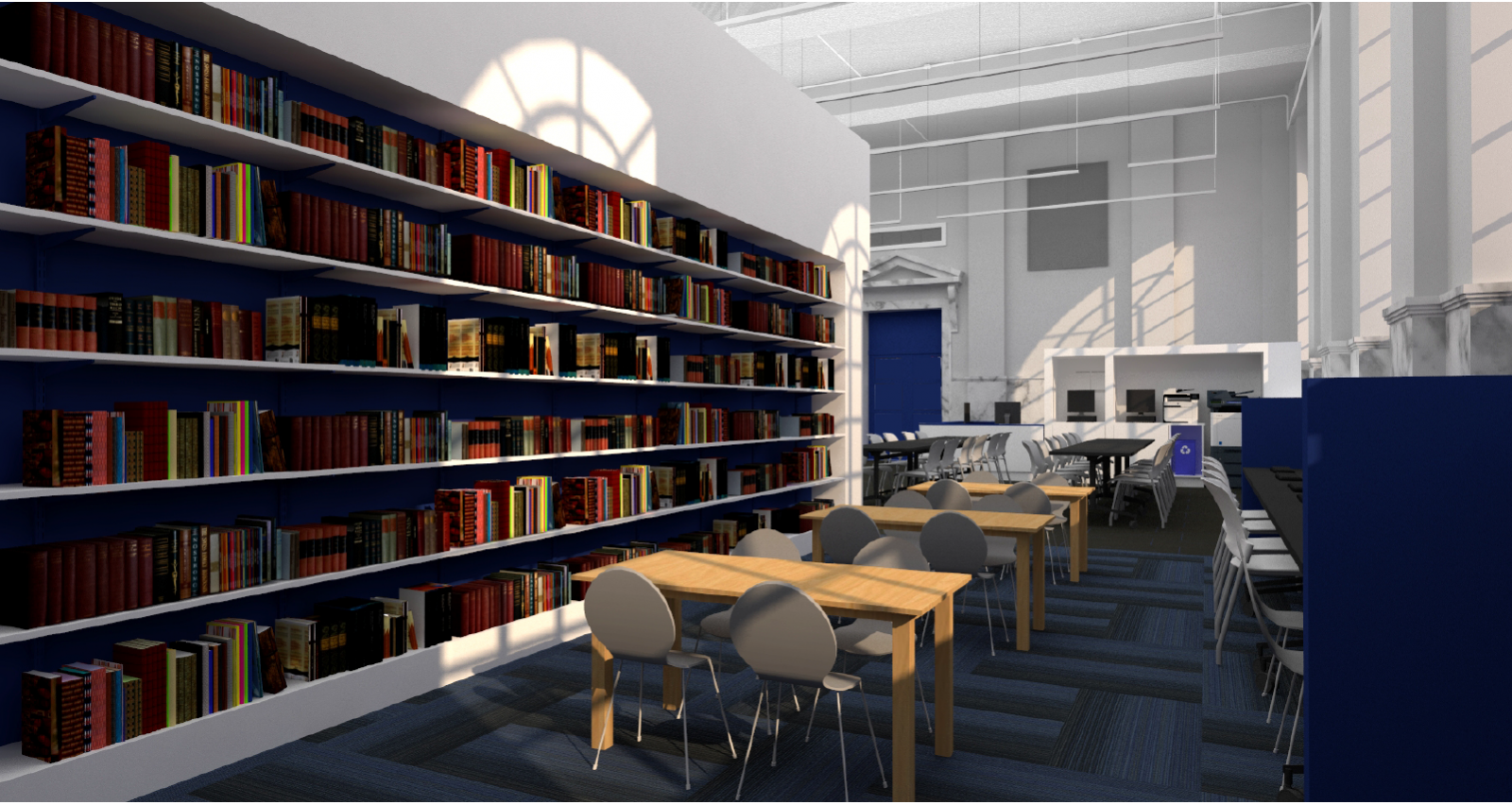 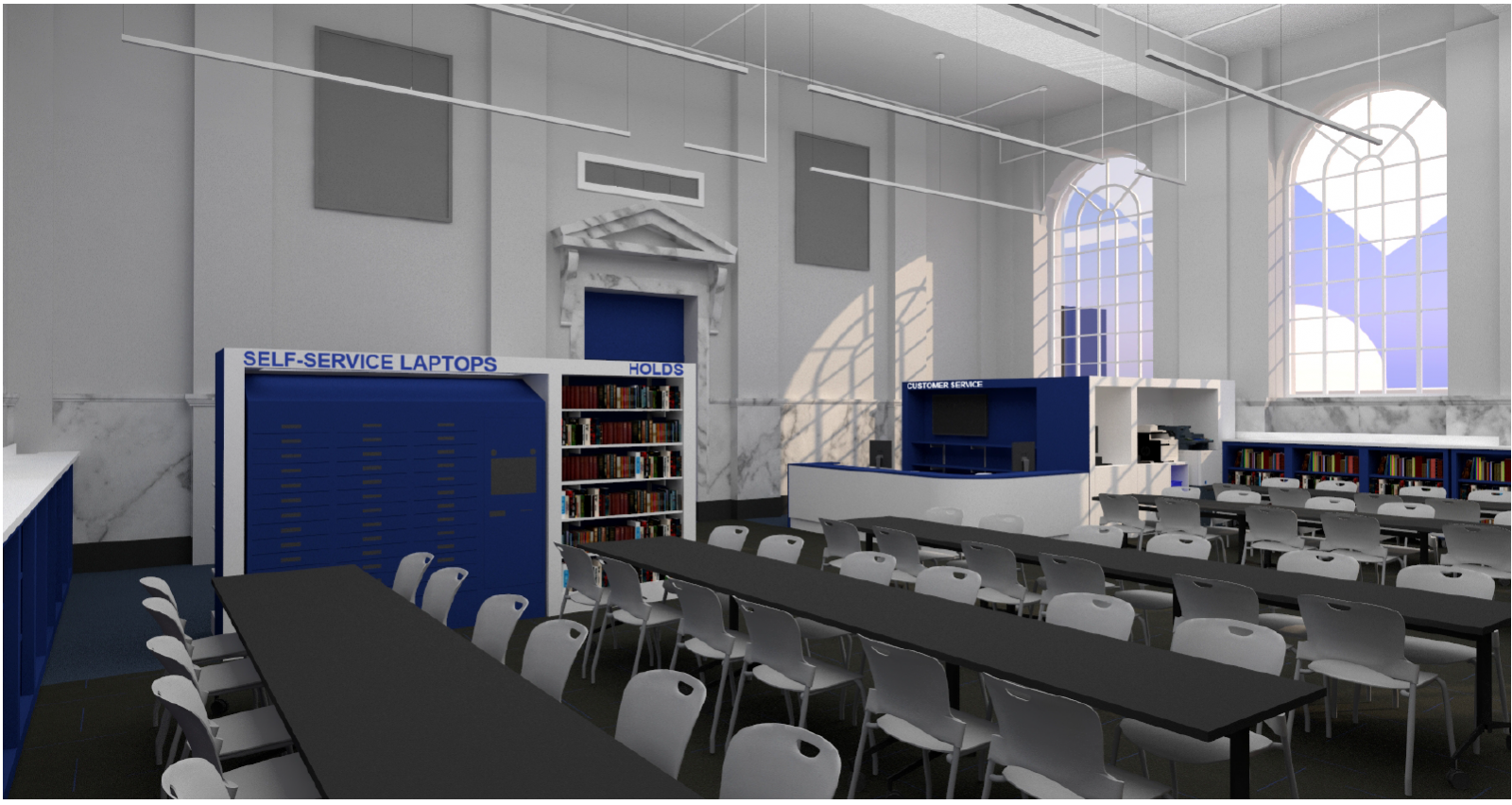 The redevelopment of Sunset Park Library will generate new, 100% permanently affordable housing for a mix of incomes, all well below the current market rents in the neighborhoods.

Under the current proposal, 49 units of housing affordable to Sunset Park residents:

Minimum 50% apartments receive preference for Community Board 7 residents, 5% for city employees and 5% of units will be preferenced for persons with physical disabilities, and 2% for vision/hearing impaired.

Fifth Avenue Committee has received an allocation of Low Income Housing Tax Credits (LIHTC), which will provide over half of the $25 million development costs. Other funding comes from New York City Department of Housing Preservation and Development (NYC HPD) and local elected officials. FAC has committed and government regulatory agreements will require that the housing remain affordable in perpetuity. As a nonprofit whose mission is to advance economic and social justice, FAC is dedicated to keeping the apartments permanently affordable and requested this requirement be added. FAC developed nearly 1,000 units over 38 years, currently manages over 500 affordable apartments, including over 120 in CB 7.

Anyone meeting the eligibility guidelines may apply. Those include having sufficient income, credit and/or access to rental assistance to pay the monthly rent and the appropriate family size for the apartments available. Anyone with an Individual Tax Identification Number (ITIN), regardless of immigration status, is eligible to apply. The apartments will be made available via an affordable housing lottery overseen by FAC and NYC HPD. As indicated above, Community Board 7 residents, individuals with certain disabilities and municipal employees will receive preference in the lottery. FAC will hold several workshops in Sunset Park in English, Spanish and Chinese beginning several months before the building is ready for occupancy to encourage residents to apply for housing and will offer financial and credit repair counseling.

Brooklyn Public Library in collaboration with Hester Street and Grain Collective gathered feedback from Sunset Park residents, organizations, policymakers, service providers, and other stakeholders for the New Sunset Park Library project. Engagement focused on both the design of the new space and the programming within Sunset Park’s new library. This report contains themes that emerged from this stage of the Sunset Park Community Engagement. 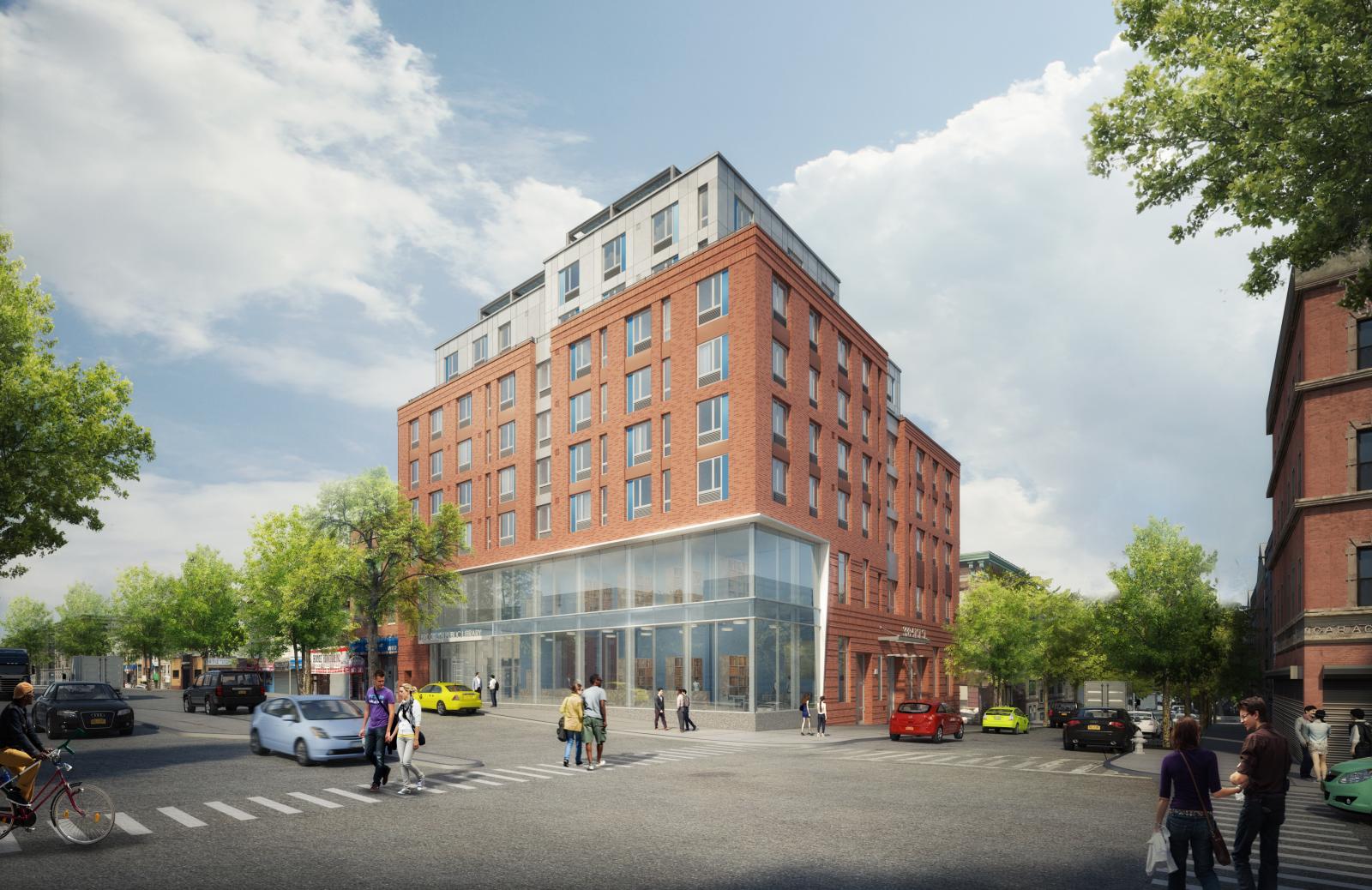 This report contains themes that emerged from this stage of the Sunset Park Community Engagement:

To ensure that the new Sunset Park Library best serves the needs of its users, BPL engaged residents, organizations, policymakers, service providers, and other key stakeholders in a participatory design process.