When people ask who my all-time favorite writer is, I never hesitate. "It’s Laurie Colwin, absolutely," I say.

More often than not I’m met with a blank stare: Colwin died tragically young and her final books were published posthumously in 1993. For years, it’s been up to Colwin’s passionate fanbase to introduce new readers to the food and fiction writer’s books. But lo! This spring, the publishers Harper Perennial and Vintage Contemporaries are reissuing Laurie Colwin’s five novels, three story collections and two cooking memoirs with fresh, beautiful covers designed and illustrated by Olivia McGiff.

The moment I learned the publishers’ plan (I periodically search Colwin’s name on Twitter in hopes of news), I reached out to request an interview with McGiff, who is an assistant designer at HarperCollins. She spoke to me about her career, her artistic influences, and how she managed to redesign Laurie Colwin’s book covers so they’re as charming and timeless as the sentences within them.

Off the Shelf (OtS): Can you describe your career path so far? When did you first become interested in book design and how did you eventually land your current job?

Olivia McGiff (OM): I originally went to school for theater. I was doing a lot of disparate jobs post-grad—set design, teaching, directing, dog walking. I started getting more into painting and illustration, honestly as a way to entertain myself. As someone living pretty paycheck-to-paycheck in NYC, it became clear that if I left the apartment, I was going to have to spend money. So I stayed inside and painted. And as I became more invested in illustration and design, I realized that theater and book design are rooted in similar things: figuring out how to visually represent a text, how to captivate an audience, how to collaborate with a team to create a really special experience—and I loved that! So I reached out to friends and friends of friends who were in publishing and book design, until someone could point me in the direction of an open position! Needless to say, the portfolio I showed in my Harper interview was filled with a lot of theater posters.

OtS: What is a typical workday like? How much has Covid-19 changed the way you work?

OM: Despite painfully missing colleagues and the energy of the office, the art department has been able to transition to remote work fairly seamlessly! Most of the design work we do is done on the computer anyways, and things that used to happen in person have been able to adapt to the screen. We present cover options to editors over Zoom, we circulate book jackets for review digitally, we see proofs from the printer over email. In the era of COVID, it’s sometimes easy to forget that these designs go on to become real-life, pickupable books! I’m looking forward to getting back to some of the tactile joys of books (and life!) when we can, but for now it’s working just fine. 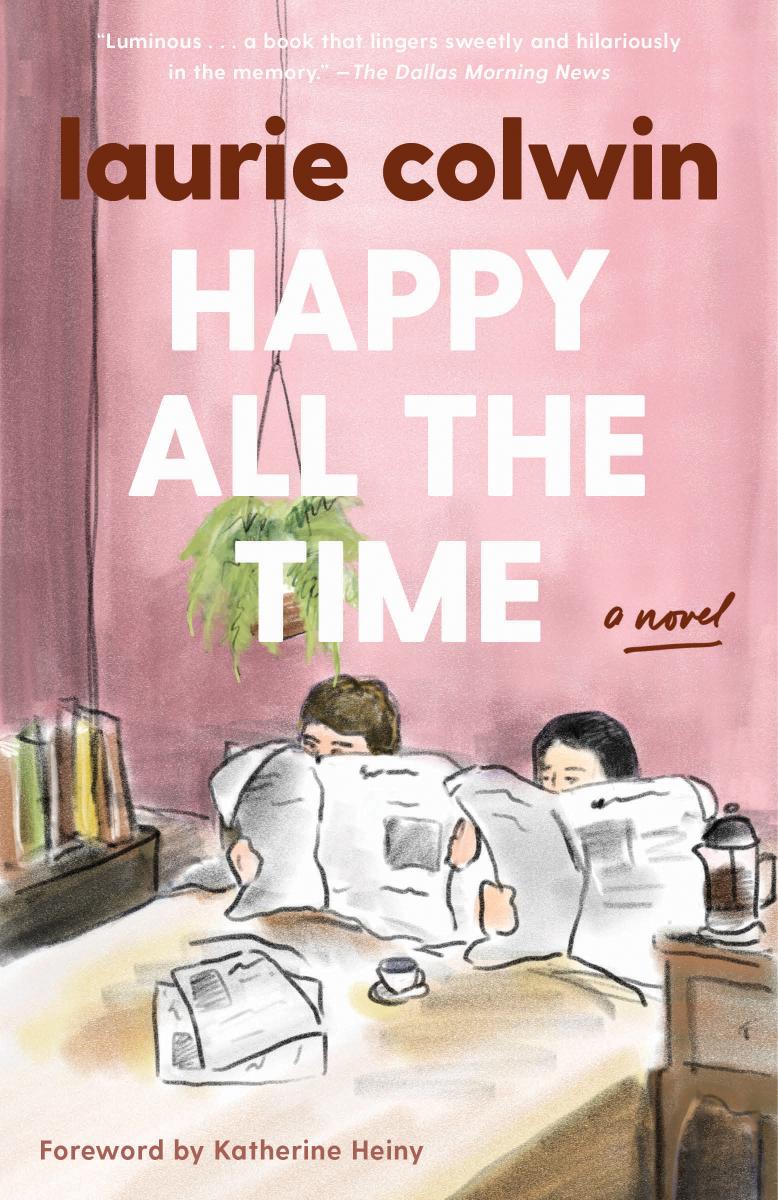 OtS: As a huge Laurie Colwin fan, I’m thrilled that Harper Perennial and Vintage Contemporaries are reissuing her books this spring. The repackaged books were designed and illustrated by you, and I hope the gorgeous covers introduce a whole bunch of new readers to her work. How did this opportunity come about?

OM: In a cosmic twist of fate, I had met and befriended Laurie Colwin’s child, RF Jurjevics, right before I started working in book design. We had bonded over our love of books and publishing, and they had told me about their mother’s novels and essays, and how the books were being repackaged in the coming year. When I started at Harper, I had no idea that Harper Perennial was one of the imprints making it happen! I was given the opportunity to work on the project, which I leapt at, and got to dive right into the rich world of Laurie Colwin’s stories.

OtS: What was your creative process for this assignment? Were you given any specific instructions up front or were the designs completely open to your interpretation?

OM: Editorial knew they wanted the new covers to be illustrated, but it wasn’t initially the plan that I would be illustrating them—we were working on finding preexisting art that could fit the stories. Early on in the process, RF had provided us with tons of family photos of their mother, scenes from Colwin’s own kitchen and dinner parties with friends. We were having trouble finding art that suited each book, and it eventually worked out that I would create original illustrations for each cover, and use RF’s family archives as reference.

Throughout the photos, you can see the ease and intimacy of Colwin’s friendships, and I used a lot of the body language from those photos as reference for the illustrations. For example, the woman lounging in bed on the Happy All The Time cover is based on a photo of Colwin in one of her first apartments. There were also specific examples of what kinds of cooking accoutrements Colwin preferred, and several of those objects are referenced in the covers for Home Cooking and More Home Cooking. Wooden spoons, enamel colanders, a red jug used as a vase—it was inspiring to have a tactile relationship with these stories, and it made the whole project feel very special!

OtS: Were any of the book covers particularly easy or difficult for you to come up with, and why?

OM: I personally love painting food and kitchen scenes, so Home Cooking and More Home Cooking were so fun to work on. And figuring out how those two covers would relate to each other was a treat, especially since one is being published by Harper Perennial and the other by Vintage Contemporaries. In terms of covers that were difficult, I found Goodbye Without Leaving somewhat hard to pin down. I loved Geraldine, the main character, but also found her to be somewhat of an elusive, Bartleby-like figure, and it was a challenge to figure out how to properly frame her. I’m ultimately really proud of how that cover came out, but she had me struggling!

OtS: For readers who are new to Laurie Colwin, which of her books should they try first?

OM: Home Cooking and More Home Cooking are both a total joy to read. They’re beautiful, playful collections of food essays, and both give such a clear sense of Colwin’s voice. And in terms of her novels, I found Family Happiness to be completely delicious! 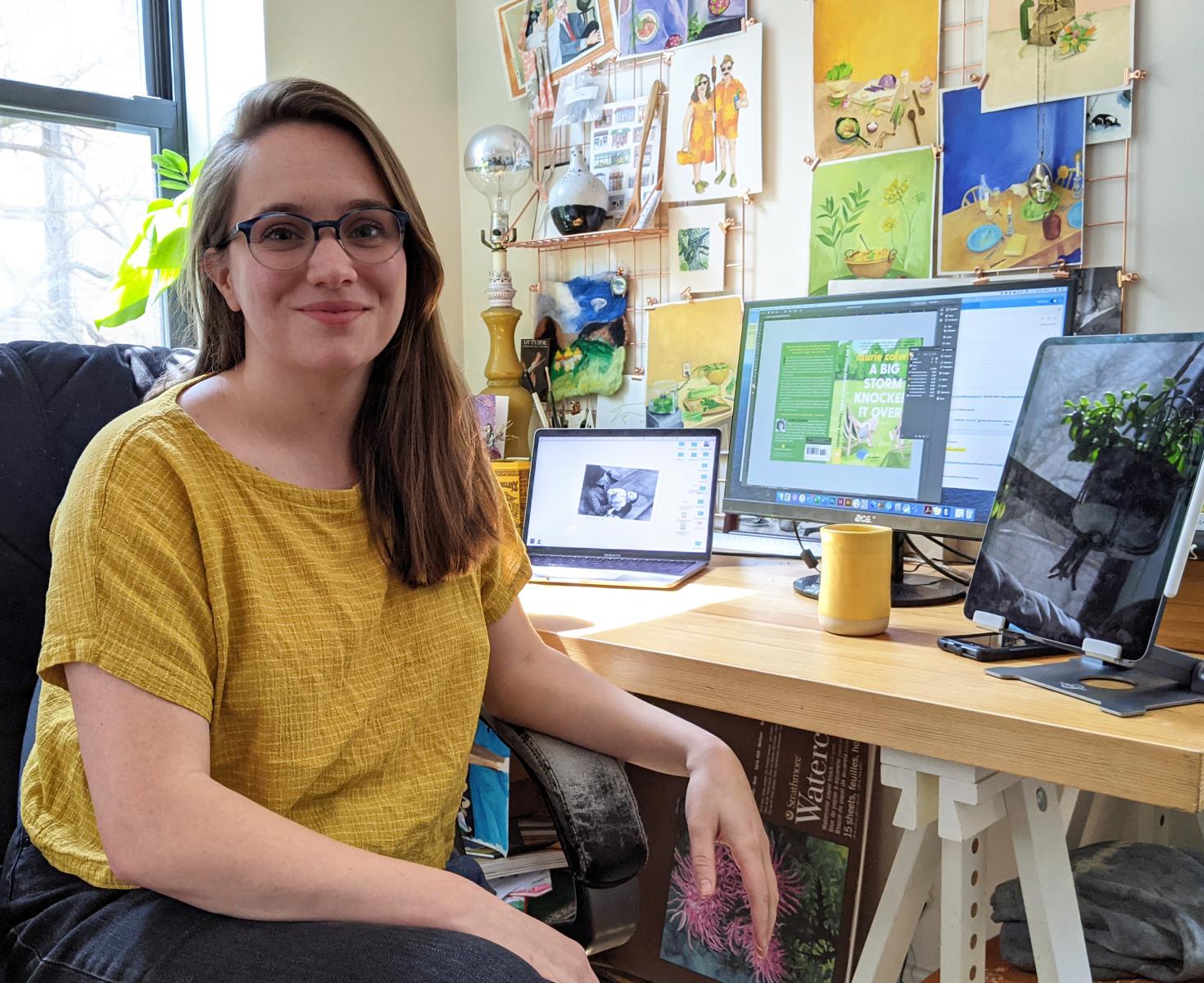 OtS: Which contemporary authors and artists inspire you? What’s one of your favorite book covers that you didn’t design?

OM: As an illustrator, I’m enamored with Wendy MacNaughton and her work as a visual journalist. I think there is so much subject matter that illustration can open up, and I’m really inspired by author-illustrators such as MacNaughton and Maira Kalman, who celebrate and elevate the everyday. As for favorite book covers, I’m an absolute sucker for vivid color and texture, so covers like the ones for The Vanishing Half and Tokyo Ueno Station are right up my alley (both designed by Lauren Peters-Collaer!). I also really love narrative nonfiction, and Oliver Munday’s cover for Say Nothing is so arresting and lets you really sink into the grittiness of those stories of Northern Ireland. Big fan!

OtS: What’s next for you: are there any upcoming creative projects (work, freelance, just for fun) that you’d like to mention?

OM: I’m currently working on an illustrated cocktail book with a bartender friend of mine! The cocktail world can sometimes feel very buttoned up and boys-club, and we’re working on making a book that is as visually delicious and playful as the cocktails themselves. And I have the important job of taste-tester, which I take very seriously :)

Thanks, Olivia! And to further tempt you to immediately check out Laurie Colwin’s books, a selection of quotes:

Lauren Dlugosz Rochford is always reading. She works in the marketing department at Brooklyn Public Library and she loves recommending books.

Very good interview. Makes me want to get all the new Laurie Colwin books.
How wonderful that the author that offered insight on wonderfulness - the oddities and intrigues of freindship, family, food considered casually, but with much humor and grace - will be introduced to a new slew of readers. She is one of my most favorite authors, and though I of course never knew Laurie Colwin, I feel like I knew the New York she adored and I miss it and I miss her. Thanks for this interview.