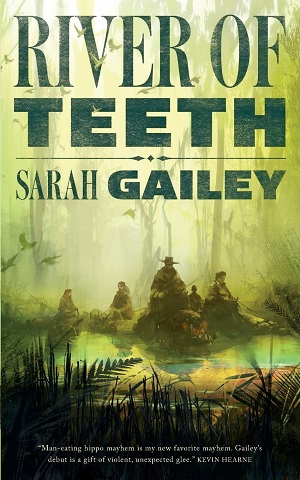 Among literary genres, horror retains a unique capacity for social critique. It is unsurprising then that a subgenre depicting the growing tension between humans and the environment has arisen out of horror: ecohorror. The consequences of industry and capitalism—in particular on vulnerable or marginalized populations, grow increasingly apparent in the world around us. And as such, the true villains of ecohorror are neither the carnivorous hippos nor the trees that come to life and snatch you into the dark, but rather the extractive systems that have led to total environmental revolt.

Yet not all is doom and gloom—such as that which seeps from a marsh preparing to absorb a small town, fortunately the protagonists of these stories often resemble the radical folks making waves in real world movements to counteract nature’s current antagonists (e.g. climate change). These protagonists know too intimately the horrors of environmental collapse, but they also know that, as a very sweaty mathematician once put it, ‘life finds a way.’ So, for both horror genre devotees and the newly initiated alike, we offer this list of ecohorror goodies from the BPL catalog. While by no means exhaustive of the genre, this list includes a range of stories—some closer to sci-fi than horror (though there is a permeable membrane between them), guaranteed to vibrate all the cilia of your private, yearning cells. Highlights include….

River of Teeth by Sarah Gailey (Tor) - An alternate history about a thing that almost happened. In 1909, Louisiana Congressman Robert F. Broussard had two problems that he wanted to solve: the water hyacinth that had been brought to the region for the 1884 World’s Fair in New Orleans were now growing out of control in Louisiana’s waterways and raising “hyall” for fish and anyone trying to navigate a boat, while there was also a national meat shortage. It was proposed to bring hippos from Africa to eat the hyacinth and then be eaten by the nation. Although this never happened, Gailey brings an authenticity to this course of events that never was. The mayhem continues in Gailey’s follow-up Taste of Marrow. Bonus: Gailey’s characters are spectacularly queer.

Alienation by Inés Estrada (Fantagraphics) - In 2054, basic human functions and resources (eating, sleeping, having sex, medical care, and fundamental connection to the world and others) are managed and accessed via a digital link. At least, they are for Elizabeth and Charly, who can afford to live a very secluded, virtual life in Alaska, unlike that of their analog friends and family who do not have the capital to live such lives. Elizabeth is a sex worker and Charly (before he gets layed off) is employed by the world’s last oil refinery that is run by humans. In a gray and blue palette, Estrada illustrates present distress and collapse in a time that has not yet happened.

Five Days at Memorial by Sheri Fink (Crown) - The most horrific offering on this list also happens to be nonfiction. Doctor/journalist Fink, recounts the first five days post-Hurricane Katrina at Memorial Medical Center in NOLA. Unspeakable conditions and ethical quandaries faced by patients and staff are rendered through both individual narratives and larger discourse about climate change and (un)natural disasters. This title is recommended for folks who gravitate towards true crime, literary non-fiction, medical history, and yes, horror.

Check out the rest of the list here: https://borrow.bklynlibrary.org/booklist/eco-horror