As summer solstice draws near, the annual Coney Island Mermaid Parade is upon us. In celebration of ancient mythology, artistic self-expression, and revelry in the culture of the seaside, marchers dress in glittering, whimsical, and wild costumes and are led by King Neptune and Queen Mermaid down Surf Avenue, while thousands of onlookers soak in the pageantry. Whether you plan to partake in the Mermaid Parade, these books will immerse you in that fantastical marine spirit.

The Pisces by Melissa Broder -- Lucy has been writing her dissertation on Sappho for nine years when she and her boyfriend break up in a dramatic flameout. After she bottoms out in Phoenix, her sister Annikia in Los Angeles insists Lucy dog-sit for the summer in her beautiful Venice Beach home. But Lucy can find little relief from her anxiety — not in the Greek chorus of women in her love addiction therapy group, not in her frequent Tinder excursions, not even in Dominic the foxhound’s easy affection. Everything changes when Lucy becomes entranced by an eerily attractive swimmer while sitting alone on the beach rocks one night. But when Lucy learns the truth about his identity, their relationship, and Lucy’s understanding of what love should look like, take a very unexpected turn. Much more than a story of falling obsessively for a merman, Broder’mers weird, wonderful debut novel examines love, lust, and questions the meaning in our existence.

The Mermaid and Mrs. Hancock by Imogen Hermes Gowar -- London, 1785: Prosperous merchant Jonah Hancock finds his quiet life upended when he unexpectedly receives a most unusual creature—and meets a most extraordinary woman. In this much-lauded, mesmerizing debut that examines our capacity for wonder, obsession, and desire, Gowar’s spellbinding novel of a merchant, a mermaid, and a madam is an unforgettable confection filled with bawdy wit, intrigue, and a touch of magic. You can choose to read this book in print, but for a real treat, listen to the audiobook read by Juliet Stevenson, nominated for an Audie Award for Best Female Narrator. 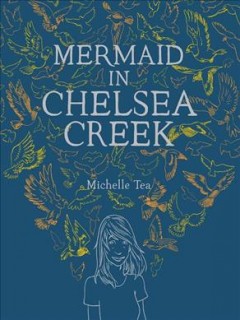 Mermaid in Chelsea Creek by Michelle Tea, illustrated by Jason Polan -- Everyone in the broken-down town of Chelsea, Massachusetts, has a story too worn to repeat—from the girls who play the pass-out game just to feel like they're somewhere else, to the packs of aimless teenage boys, to the old women from far away who left everything behind. But there’s one story they all still tell: the oldest and saddest but most hopeful story, the one about the girl who will be able to take their twisted world and straighten it out. The girl who will bring the magic. Could Sophie Swankowski be that girl? With her tangled hair and grubby clothes, her weird habits and her visions of a filthy, swearing mermaid who comes to her when she’s unconscious, Sophie could be the one to uncover the power flowing beneath Chelsea’s potholed streets and sludge-filled rivers, and the one to fight the evil that flows there, too. Sophie might discover her destiny, and maybe even in time to save them all. This avant-garde fantasy debut by Tea is grim in theme but lush in prose, and if you enjoy it, pick up the next two volumes that round out the Chelsea Trilogy.

The Mermaid's Sister by Carrie Anne Noble -- In a cottage high atop Llanfair Mountain, sixteen-year-old Clara lives with her sister, Maren, and guardian, Auntie. By day, they gather herbs for Auntie’s healing potions; by night, Auntie spins tales of faraway lands and wicked fairies. Clara’s favorite story tells of three orphan infants—Clara, who was brought to Auntie by a stork; Maren, who arrived in a seashell; and their best friend, O’Neill, who was found beneath an apple tree. One day, Clara discovers shimmering scales just beneath her sister’s skin: Maren is becoming a mermaid and must be taken to the sea or she will die. So Clara, O’Neill, and the mermaid-girl set out for the shore. But the trio encounters trouble around every bend. Ensnared by an evil troupe of traveling performers, Clara and O’Neill must find a way to save themselves and the ever-weakening Maren. And always in the back of her mind, Clara wonders, if my sister is a mermaid, then what am I?

Coney Island by Laura J. Hoffman -- Hoffman's nostaligic contribution to the Postcard History Series focuses on Coney Island, famous for so much more than just hot dogs and wild rides. At the turn of the 20th century, it was known as the "Playground of the World." In the beginning, this upscale resort area catered to the rich. Between 1897 and 1904, three lavish amusements parks opened in Coney Island. By 1920, the subway extended to Stillwell Avenue, which made Coney Island more accessible for everyone. The abundant history is remarkable, and its peaks and valleys closely resemble one of its most famous icons, the roller coaster. Coney Island hit its apex between 1910 and 1930. Afterwards, it suffered through the Great Depression, went into major decline after World War II, and hit bottom in the 1970s and 1980s. In recent years, there has been a profound revitalization effort to bring the area back to its glory days. Despite the major setback caused by Superstorm Sandy in 2012, the spirit of Coney Island is alive and well.

Coney Island: 40 Years, 1970-2010 by Harvey Stein -- This compelling collection of photographs captures the essence of Coney Island which lends its particular charm to the atmosphere of the Mermaid Parade. Photographer Stein writes, “Entering Coney Island is like stepping into another culture, and I have tried to capture the lives and times of those who work and play there. There is a sense of adventure, a thrilling escape from daily worries, and much pleasure, whether riding an amusement, walking the boardwalk, viewing the Mermaid Parade, or sunbathing on the beach. Coney Island, American's first amusement park, is celebrated worldwide. It is a fantasyland of the past with an irrepressible optimism about its future.”  Stein’s 40-year romance with this iconic locale may inspire your own love affair with Coney Island.

And for our readers with young readers or for those readers who wish to engage their own inner child, may I recommend…

Julián is a Mermaid by Jessica Love -- While riding the subway home from the pool with his abuela, Julián is awed by three women dressed in spectacular mermaid fashion, with colorful tresses and fishtail dresses. When Julián gets home, he creates his own fabulous mermaid costume: a butter-yellow curtain for his tail, the fronds of a potted fern for his headdress. But what will Abuela think about the mess he makes — and even more importantly, what will she think about how Julián sees himself? Brooklyn resident Jessica Love’s author-illustrator debut is a joyous celebration of individuality and imagination, and is an absolutely gorgeous representation of the spirit of the Mermaid Parade.