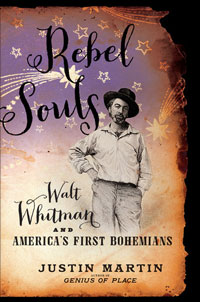 Living for the moment is living for history when whatever tales are told become the stuff of legacy. Walt Whitman was a flaneur, a lover of walking. By his own admission he was a loafer. Throughout his transitory state he continued to hold onto what was dear to him. In time it became dear to others, affecting them and influencing forever what is considered the best of American culture. Such was the power of his poetry, fleeting thoughts that became a tangible reality. Today all of that and more is Whitman’s continuing gift. Brooklyn Public Library has in its collection works that consider the life and times of Whitman, as well as how his poetry has influenced other writers and scholars.

This is a biography of Whitman as well as stories of those who radically influenced him and our later American culture. At a low point in Whitman’s very early literary career he found solace among the cantankerous conversations at Pfaff’s, a saloon just north of Bleeker Street at 647 Broadway. There he found a champion for his radical, often vilified, but largely ignored, poetry in Henry Clapp Jr., aka “King of Bohemia”. Whitman met other writers, artists, actors, and influencers such as Thomas Aldrich, Fritz Hugh Ludlow, actress Adah Isaacs Menken, writer Ada Clare and Artemus Ward. Through letters, articles, and other primary sources, the author illustrates the lives of these significant unknowns.  “The Pfaff’s Bohemians were part of the transition from art as a genteel profession to art as a soul-deep calling, centered on risk taking, honesty, and provocation.” They influenced later trends such as standup comedy, outsider art, and the concept of the Bohemian spirit. Whitman would outlive most of this crowd, continue to expand subsequent editions of Leaves of Grass; and during his lifetime achieve legendary status and worldwide fame.

The American Stage: Writing on Theater from Washington Irving to Tony Kushner, Edited by Laurence Senelick

Published by The Library of America, this rich, dense tome features writers from a range of times and perspectives providing commentary on what was happening in their worlds of the American stage. The reader experiences attitudes and language that is not of our modern genre. Among this collection are Alexis de Tocqueville; Edgar Allan Poe; Willa Cather; Dorothy Parker; Langston Hughes; Lorraine Hansberry. Our man Whitman took the ferry from Brooklyn to Manhattan, “I spent much of my time in theatres then, seeing everything, high, low, middling—absorbing theatres at every pore.” He was as fascinated with who attended as much as what was performed on the stage.

American Lit 101: From Nathaniel Hawthorne to Harper Lee and Naturalism to Magical Realism, an Essential Guide to American Writers and Works by Brianne Keith 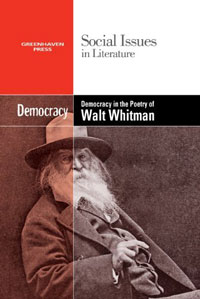 This provides remedial awareness of those American authors who shaped cultural thought. For those who would like to become familiar with seminal American works, this small volume lists what one might want to someday read. Summarizing the authors’ themes; interspersing juicy backstories and anecdotes, we have a relevant source for homework assignments and informed party banter.

Social Issues in Literature: Democracy in the Poetry of Walt Whitman by Thomas Riggs and Company, Book Editors.

This title is one of a series published by Greenhaven Press which views literature through the sociological lens of contemporary scholars, thinkers, writers. A variety of themed articles analyze Whitman’s ideas of democracy, authority, capitalism, equal rights, sexuality, individualism, and abolitionism.

Booked: A Traveler's Guide to Literary Locations Around the World by Richard Kreitner

Heavily illustrated, this is a work of places made famous by iconic books. It features a world & time spanning survey, complete with backstories, that orient the traveler to a range of places which sparked some of our most profound literary creations. The inspiration for “Crossing Brooklyn Ferry” is discussed in the section “Literary Brooklyn.” That Fulton Street Ferry was made obsolete when the Brooklyn Bridge opened. Although the ferry ceased operations in 1924, the poem it inspired continues its relevance.