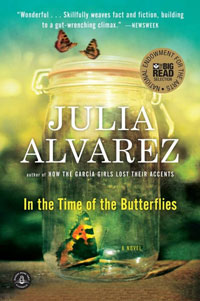 On November 25, 1960, three of four Mirabal sisters—Patria Mercedes, María Argentina Minerva, and Antonia María Teresa—were assassinated on orders from the long-standing Dominican dictator, Rafael Leonida Trujillo, because of their involvement in underground activities that sought to unseat him. Known as Las Mariposas, their deaths (the anniversary of which is now known as the International Day for the Elimination of Violence against Women) set into motion a surge in opposition that led, finally, to the assassination of Trujillo. The lives of Las Mariposas is the basis for the novel by Julia Alvarez, In the Time of the Butterflies, currently celebrating the 25th anniversary of its publication.

“In the Time of the Butterflies is a book that helped me understand my country's story and my parents' story,” said Alvarez in the NEA’s To Tell the Truth podcast (2010). “But I think it was a book also that I had to write because it as a debt that I owed.” Alvarez reinforces this idea of debt in subsequent talks about her book: she and her sisters got out; Las Mariposas did not. “And so what is the responsibility of those that survive?” she asks. “To remember, and to remind.”

As recently as this week, in an appearance with award-winning author Elizabeth Acevedo (The Poet X) to celebrate the novel’s book birthday, Alvarez remains in awe and humbled by its lasting effect on the literary landscape, sharing that The New York Times Book Review panned it in 1994 (THE ABSOLUTE NERVE!).

But for many in attendance, including Acevedo, Alvarez’s Butterflies (and similarly, How the Garcia Girls Lost Their Accent) was the first time Dominicans saw themselves represented in popular fiction. I personally hadn’t heard of her until the early 2000s, which means I’d reached my 20s, as a voracious reader and a regular at the Marcy and DeKalb libraries, without ever seeing myself in a book. After that, however, I read everything she published, and through her discovered so many other Dominican or Latinx voices that helped me—a first-generation Dominican straddling two cultures without any real anchor to either—find my voice as a writer. As Alvarez so eloquently put it: “The real homeland is in the stories. We write to belong.”

Perhaps a better testament to Alvarez’s impact on readers, especially Dominican-American readers, were the fans who stood up, a few in tears, to tell her how much Butterflies or Garcia Girls changed their lives. “Because of your book I didn’t have to explain where DR was or what a Dominican was,” one woman joked (something I relate to 100%). Their testimonies gives merit to the demand for more #ownvoices works to be published. Everyone should be able to see their reflection in a book!

To get acquainted with the greatness that is Julia Alvarez, here’s a starter pack of titles to whet your appetite:

I haven't ever read Julia Alvarez, but I definitely think I'll be checking out some of these books to get a taste of her writing! Thank you for bringing her to my attention!