Many BPL branches are open for lobby service! See our location map for details. All BPL locations will be closed on Thursday, November 26 for Thanksgiving Day.

Tonight, Jewish families around the world will be celebrating Rosh Hashanah, the Jewish New Year. Rosh Hashanah can take place in September or October, depending on the Hebrew calendar. There are quite a few Jewish traditions to starting the Jewish New Year off right, but one of my favorites is dipping apple slices into honey to welcome in the sweetness of the new year.

Here is a collection of sweet books to reserve for the Jewish New Year: 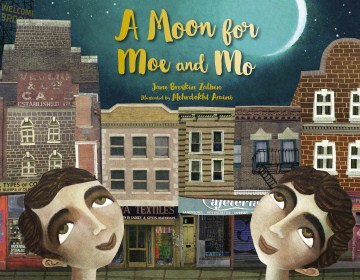 A moon for Moe & Mo by Jane Breskin Zalben, illus. by Mehrdokht Amini.

This is a great Brooklyn story that takes place on Flatbush Avenue and celebrates Rosh Hashanah and Ramadan, the holiest month of the year in Islam. Some years, the two holidays fall around the same time. When Moe, a Jewish boy goes grocery shopping with his mother to prepare for Rosh Hashanah, he meets Mo, a Muslim boy preparing for Ramadan. The two are mistaken for brothers and instantly become friends. The two boys have so much fun together that their families decide to celebrate their holidays together with lots of good treats at sundown.

When it comes to learning about Jewish holiday traditions, Sammy Spider is the classic ”fly on the wall”(or should I say spider in the corner?) He likes to learn about Jewish holidays from his web at the Shapiro’s house. In this case, Rosh Hashanah is approaching, and Sammy Spider is seeing how the family plans for the holiday. The mail carrier is carrying more letters than usual, the Shapiros are kneading round challah breads instead of traditionally braided ones, and there’s apples with honey! This pre-school stable is a great introduction to Rosh Hashanah and the concept of size. Other Sammy Spider favorites explore opposites, numbers and colors.

Set in the United States, this tall tale is about how Big Sam makes a GIANT-sized challah for Rosh Hashanah. He digs an enormous hole in the ground to use as a mixing bowl. (Today we know it as the Grand Canyon.) He whittles a massive California redwood tree into a mixing spoon. He flattens the hills of West Texas as he kneads the dough. And he bakes inside Mount Saint Helens. But when it's time to celebrate the holiday, the eagles call out, "Not so fast, Big Sam!" Rosh Hashanah is about fixing the world, and Big Sam has some MAJOR cleaning up to do. 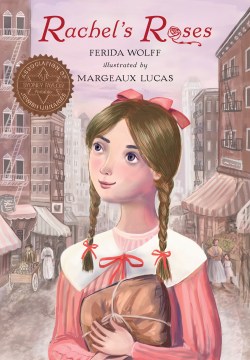 This is a great Rosh Hashanah story for chapter book readers. Set at the turn of the 20th century in the Lower East Side, when buttons were 25 cents (and that was expensive!), Rachel is looking to stand apart from her sister this Rosh Hashanah. Rachel’s mother is making her dress for the holiday and the glass rose buttons Rachel sees at Mrs. Solomon‘s button shop would give it the perfect touch. 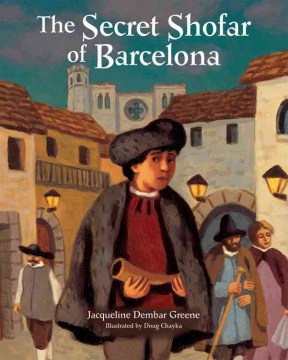 The secret shofar of Barcelona by Jacqueline Dembar Greene

Many Jewish stories that are published are about Ashkenazi, Yiddish-speaking, Jewish communities. This is a wonderful story about Sephardic Jewry. Many Sephardic Jews had been living in Spain and Portugal during the 1400s, that is until Queen Isabella and Ferdinand decreed a law that being Jewish was a crime. Many Jews fled the area, others stayed and were persecuted and killed. A third group converted to Catholicism, but secretly continued to practice their Jewish religion. This story is about that third group: symphony conductor Don Fernando longs to hear the sound of the shofar, a ram’s horn, blown every year on Rosh Hashanah. How will Don Fernando and his son Rafael devise a plan to usher in the Jewish New Year in secret? 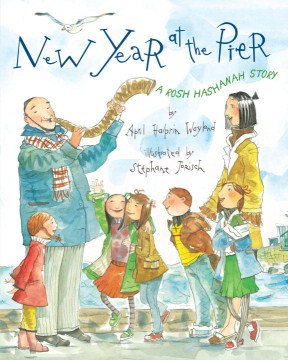 This Rosh Hashanah book is about the tradition of Tashlich. During the Jewish New Year, families throw bread or rocks into a body of water to cast out their sins, hoping to make better decisions for the next year. This story captures the spirit of the tradition through Izzy and his family. 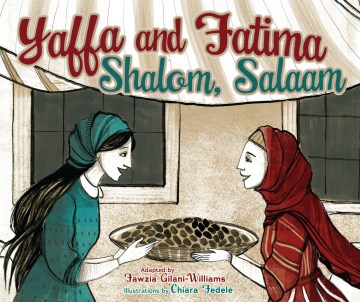 Although this book is not explicitly a Rosh Hashana story, I think it captures the sweetness of two best friends, Yaffa and Fatima, who live on neighboring date groves. This is a great introduction to Jewish and Muslim traditions. For example, Yaffa is Jewish, and prays with her prayer book called a siddur in a synagogue. Fatima is Muslim who reads the Qu’ran and prays in a mosque. There is also mention of Yom Kippur, the Jewish holiday that starts next week. When a drought yields a poor growing season for their date businesses, the two friends show readers what it means to be a true friend in tough times.

Check out this Youtube Reading of Yaffa and Fatima

This is by no means an exhaustive list of children’s books about Rosh Hashanah, so if you are looking for something more, please reach out to your branch librarians.