In March 2020, just before the closure of Brooklyn Public Library’s physical spaces, the Brooklyn Connections team had the pleasure of spending a day at the Brooklyn College Archives with their archivists and a group of New York City school teachers for a day-long professional development workshop on women in Brooklyn.

We were excited to be in the Brooklyn College Archives because of their fantastic collection of material about the life and work of Shirley Chisholm; this inspired us to look at material from the Brooklyn Collection that highlights the lives of other women of color in Brooklyn. In this blog post, we’ll take a glimpse at Sarah J. Smith Garnet.

Sarah J. Smith Garnet is best known as the first Black woman to be headmistress in the New York city public school system. She had famous siblings, too! Her sister was Dr. Susan McKinney Steward, the first Black female doctor in New York State.

Not only did she achieve great things in her own career; she also actively supported other women of color in the profession. In 1893, we find her signing a public letter to the Board of Education in support of the promotion of Ms. Putnam, another Black teacher, to a head of department role at Public School No. 83. 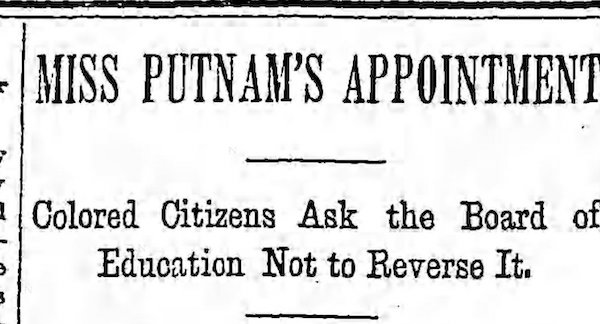 Beyond just New York City, Sarah J. Smith Garnett was known for her work to advocate for retention of Black teachers across New York State.

Ms. Garnet played an important role in both the equal rights and suffragist movements; she was a founding member of the Equal Suffrage League in Brooklyn, and WEB DuBois spoke at her funeral.

In 2019, Brooklyn’s P.S. 9 (just a stone’s throw from the Brooklyn Collection) was renamed the Sarah Smith Garnet school in recognition of her life.

This is fascinating, but it's frustrating how little it actually tells us about her career! Where did she grow up? Where did she train to be a teacher, and how long and where did she teach (P.S. 9, perhaps??) before she became a Headmistress, and was there any controversy about her appointment? Was the school she taught at mostly Black students (Weeksville??) or not? I'd love to know more about her background!
S.J.S. Garnet first taught at Colored School #3 in Williamsburg from 1845-1863, where there used to be a substantial African-American population. Schools were in a way more integrated back then, and Colored School #2 in Weeksville regularly attracted white students, though its successor school today, PS243, is only 1% white. What is especially interesting is that Colored Schools in Brooklyn had Black administrators and white subordinates. There were controversies at the time, and it's a bit much to get into here. SJS Garnet was a principal in Manhattan from 1863-1900, so she was an educator for more than 50 years! Her father was one of the original investors of Weeksville, and he lived where the Marriott is today, and was a school trustee. She moved to 205 DeKalb, and later in life lived at 748 Hancock St in Bed-Stuy. She was clearly very well respected, and I have been unable to find any controversies about her job as a principal. In public displays of their accomplishments, the Colored Schools regularly exceeded the predominantly white schools.