June is Pride Month! If you are part of the Lesbian, Bisexual, Gay, Trans, Queer, Intersex, Asexual (LBGTQIA) community or an ally, show your pride with rainbow pom-poms!

The History of the Rainbow Flag

In the 1960s, before the creation of the rainbow pride flag, the LBGTQIA community represented themselves with a pink triangle, but this symbol had a dark history. Nazi Germany had forced the gay community to wear pink triangles in order to persecute them. One man, Gilbert Baker, wanted a new symbol, one where he could spread love instead of hate. It was a night dancing that Gilbert envisioned the rainbow as a symbol of hope. Since Gilbert Baker’s creation, the Pride flag has been adapted throughout the years. There is a trans pride flag, thanks to veteran Monica Helms, and a Black Lives Matter Pride flag. For many years, much of the progress of the LBGTQIA community excluded trans people and black and brown people. Today, Black trans women, in particular, face more violence than the rest of the LBGTQIA community. When people show their Pride flags with black and brown colors and trans colors (including white, light pink and light blue), it shows the rainbow flag as a more inclusive symbol.

How to make a Pom-Pom

** If you have a place to sit with easy clean-up, you will thank yourself later. The cutting gets messy! I set up on my yoga mat, covered with a garbage bag I cut open. When I was done trimming the yarn, I gathered the ends of the garbage bag and threw it all away in one go.**

The first thing you need to do is flip your glass over and trace a circle on your two pieces of cardboard. Once you cut them out, make a hole in the middle of one of them as pictured above. 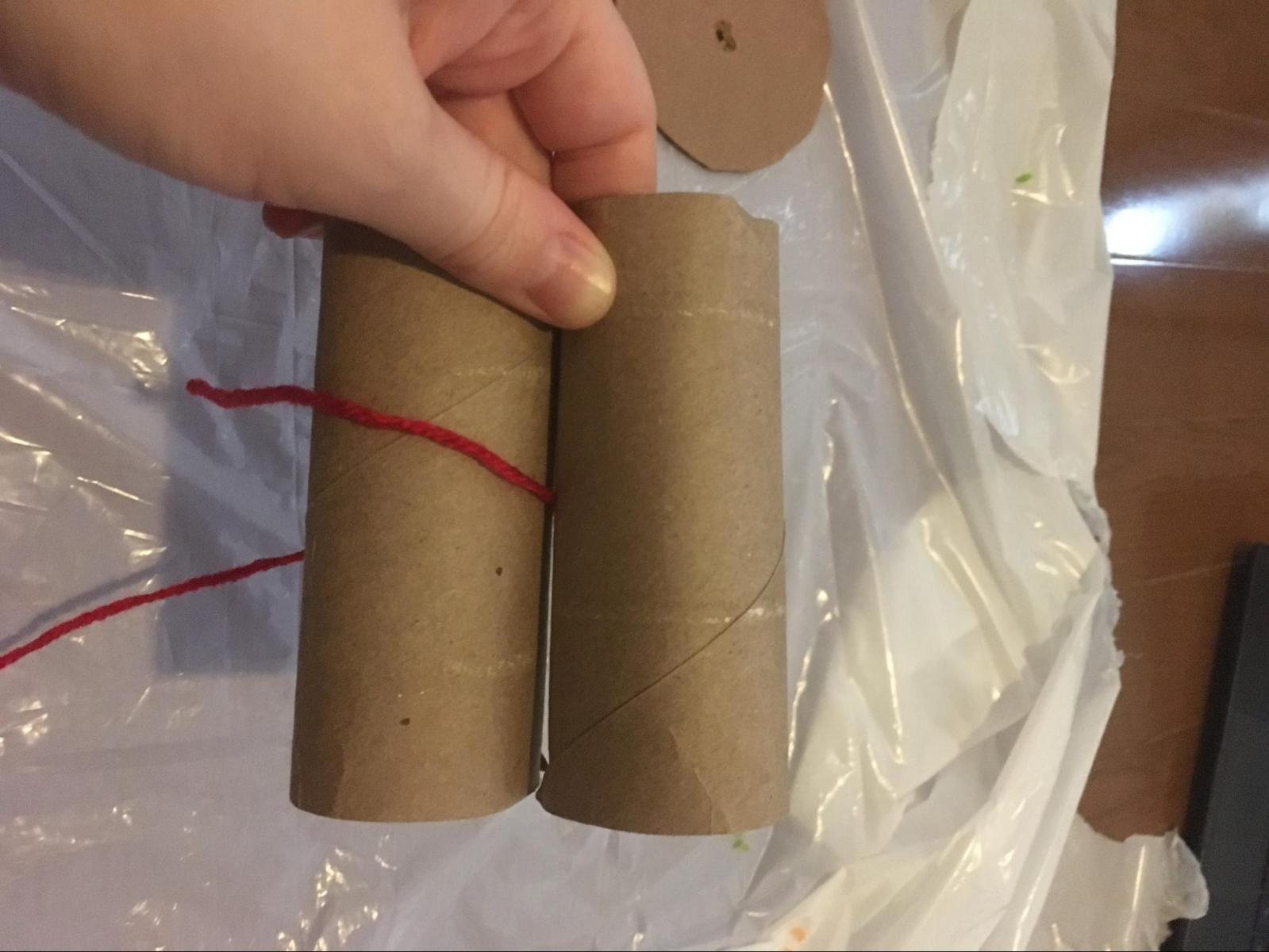 Take your first color of yarn and slide it between the two tubes, so it doesn’t fall out. 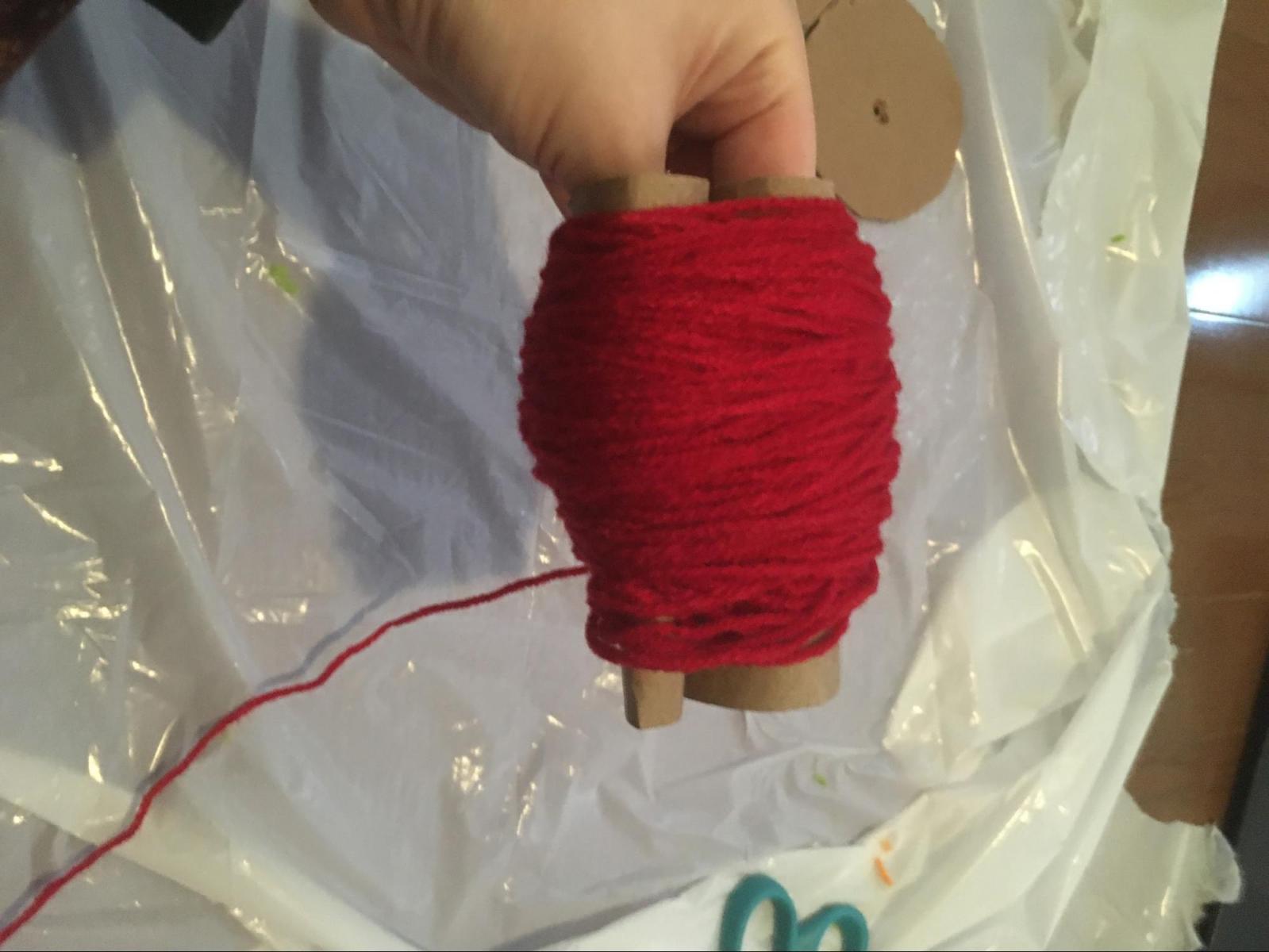 Wrap the yarn around both tubes 175 times. The more times you do it, the more poofy your pom-pom will be. Some people like to wrap two colors together. In that case, you’d knot the two colors together, making a two strand yarn, then wrap 100 times. This step is a great place for little ones to help wrap and count. The next steps may be harder and will need more supervision for young children. 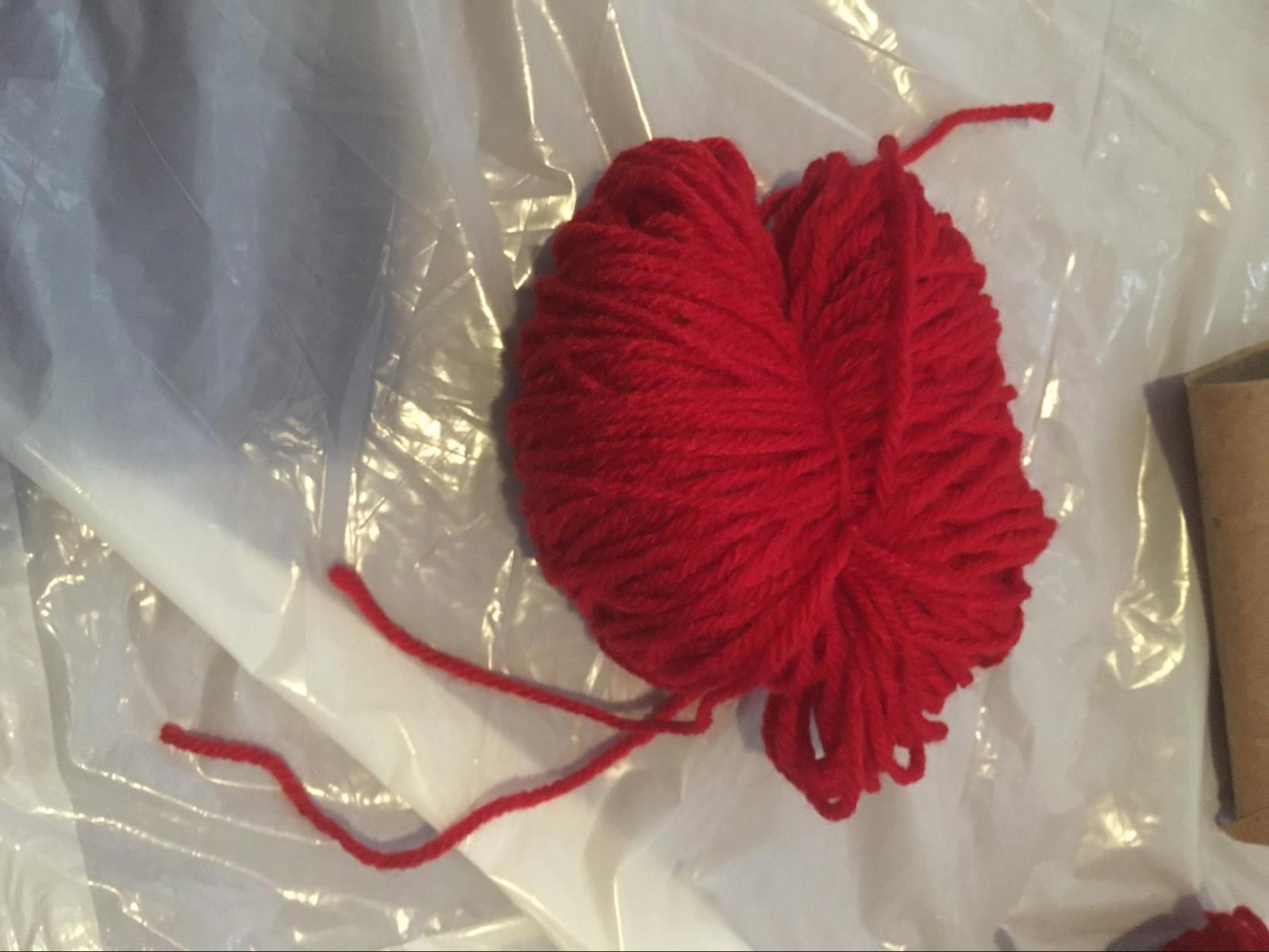 Now that you are done wrapping, cut the string from the ball of yarn. Cut a 10 inch (doesn’t have to be exact) piece of string of the same color. Slide it between the two tubes and tie it (DO NOT make a knot.) Then slide the yarn off the tubes. (see the picture above) NOW  it is time to make a knot. 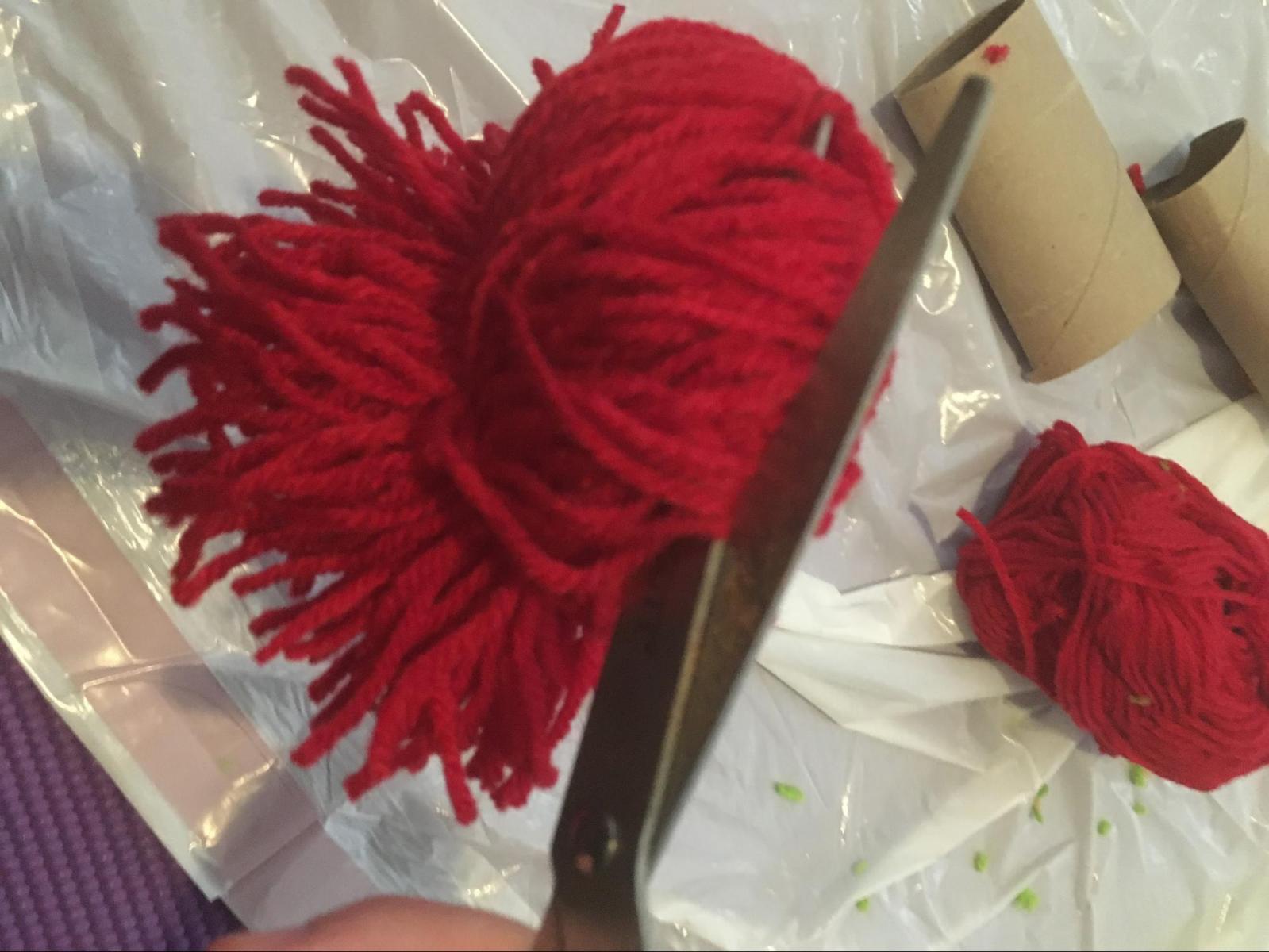 Once you make your knot, it’s time to start cutting. You will be cutting both sides loose. When you are done cutting you will find that the pom-pom is very shaggy, not the typically tight pom-pom. For younger children, that might be enough! For older kids, see the next steps. 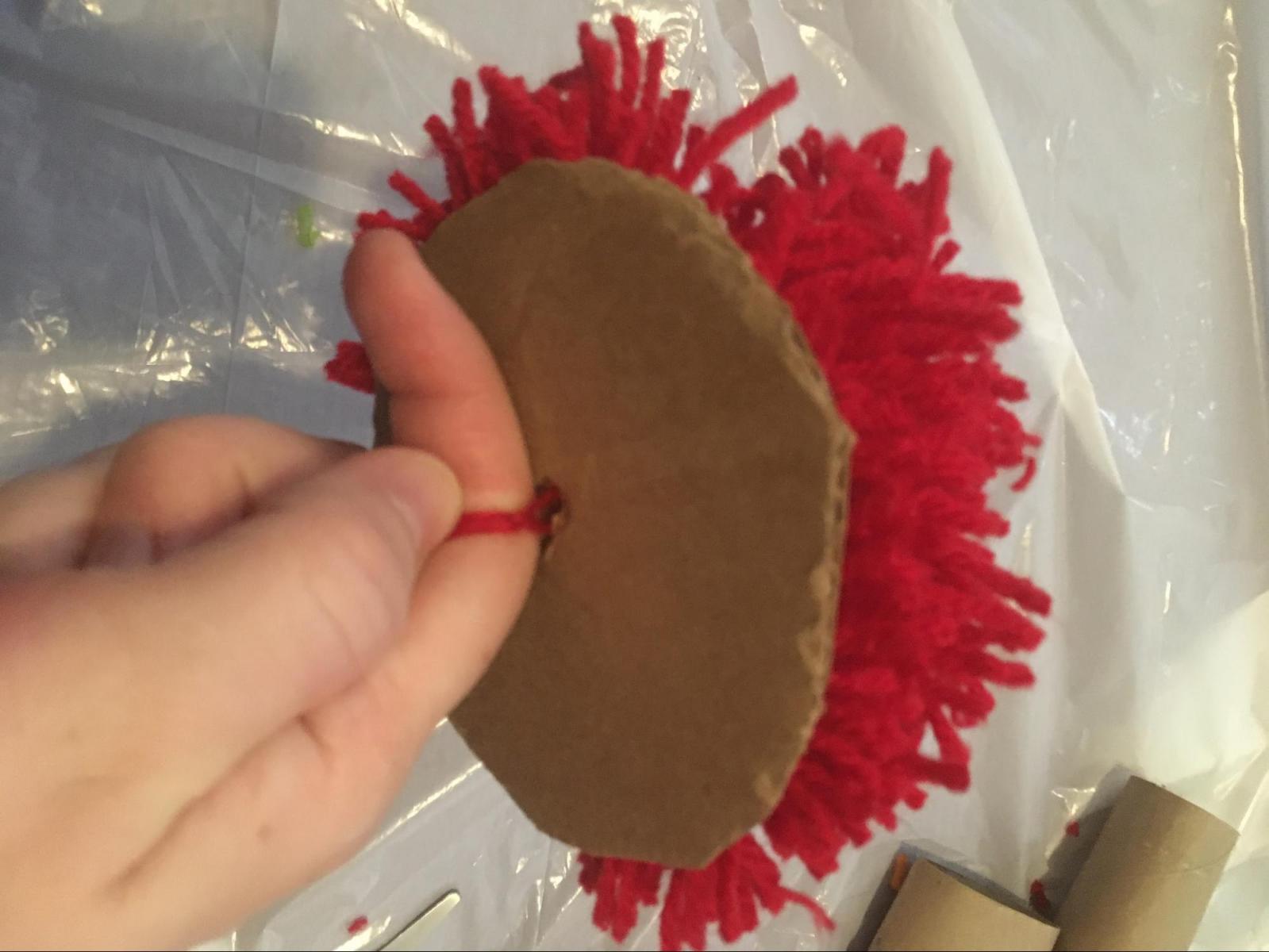 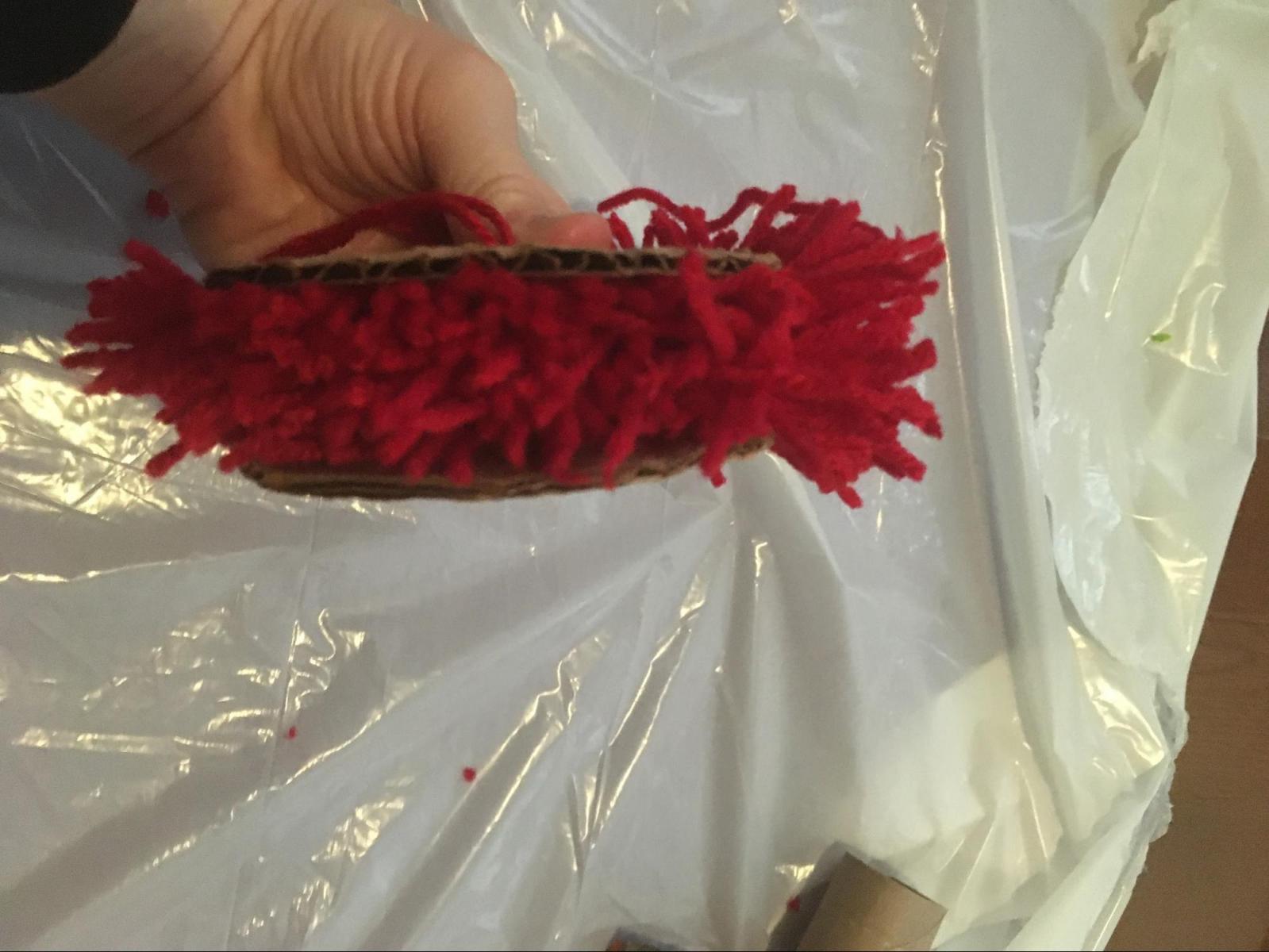 Now that you have sandwiched the pom-pom, it’s time to cut the yarn. Some people cut the yarn up to the template for added poofiness, but if that is too difficult, trimming the pieces and making them the same length goes a long way! Once you are done with this step, remove the templates. Shake your pom-pom. If you like it, you can stop trimming yarn here. If it still looks a bit shaggy for your taste, it’s time to place your templates at 90-degrees of where you were just cutting. You had just cut the top and bottom. Now you need to cut the sides. Take the 10 inch string and hide it (remember you won’t be able to use the hole of the template because you have turned your pom-pom on its side). Trim once again. Shake it out!

Voila! This is what it will look like when it’s done! Go ahead and make some more in new colors! 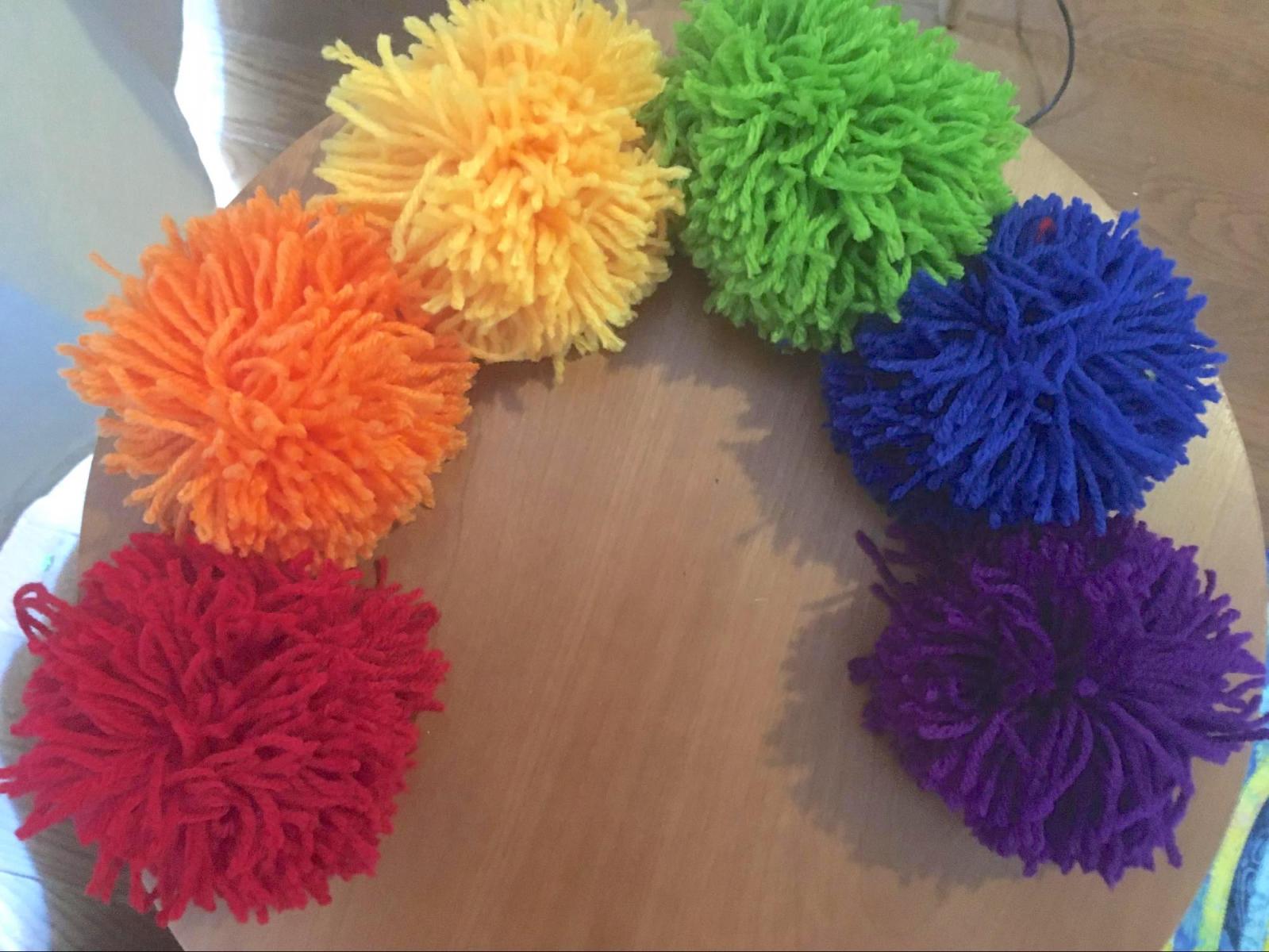 What do I do when my pom-poms are done?

You can hang them from a long string around your bedroom. You can snap the bottom off a metal hanger and lay the pom-poms on the arch with a hot glue gun. When the glue is dry, hang your rainbow on a hook to show your pride. You can make one multicolored pom-pom and hot glue it to a headband. If you want to make a rug, you can buy a no-slip mat and tie the pom-poms to the mat (you need to make ALOT of pom-poms for this one!) Or maybe when you are done with your pom-poms, you can come up with a cheer and dance with pride around your living room! I can’t wait to hear about your Pride pom-poms creations!!

Very good job Danielle, thank you, i will recommend this assignment to my daughter family. They will be so happy to follow and do such a beautiful Pom-poms. And they will make the neighbor's kids join the task!