Brooklyn Connections is the education outreach program in the Brooklyn Collection. It focuses on cultivating 21st Century learning skills in students and supporting teachers on the incorporation of archives materials into curricula. This blog post is part of a series from the Brooklyn Connections team, sharing skills and ideas for using archives primary source material in the classroom.

In addition to providing students with an opportunity to analyze documents to find these claims and counterclaims, teaching this skill with local history primary sources provides a way for students to draw connections between themselves and varying perspectives within their own community, while practicing valuable research skills.

Finding a good set of primary sources for a claim and counterclaim requires looking for documents that show different perspectives about the same issue. In our Claim and Counterclaim Lesson Plan, we’ve used the following document from Girls High School. We love this source because it clearly outlines a claim and counterclaim, with supporting evidence, in one document. You can also think of other local issues that your students might identify with; do you have access to primary sources that express different claims or counterclaims around that single issue?

The big question that we want to examine with students is: How do we identify claims and counterclaims in primary sources, and how can we use them in our research?

What is a claim? It is a statement of someone’s opinion.

What is a counterclaim? It is a statement made to offset a claim. There might be several claims and counterclaims around a single issue – not just two.

Students already have the skills for making claims. We love to pause the lesson at this point to ask students to name their favorite pop star, or social media platform, or recent action film. After the class engages in a heated debate over the best top 40 singer, we can ask for evidence that they would use to defend their opinion: how would you demonstrate that Beyoncé is better than Rhianna? How would you convince your friend that Katniss is better than Harry Potter?

Returning to our definitions of claims and counterclaims, ask students: how do researchers defend their claims? They use facts as evidence. Similarly, the students have already demonstrated how they use facts as evidence to back up their own claims – for example, the number of Instagram followers, Grammy wins, and #1 singles as proof of who is a better singer. We find that students are more engaged after they realize that they already have the skills necessary to identify and analyze a set of claims and counterclaims.

Claims and Counterclaims in Primary Sources

Next, it’s time to look at our primary source. Let's find a claim!

In our example, the claim is stated very clearly: "Do you think Regents examinations are of any value?"

The same lesson with a group of students in the PS 244 school building at Tilden Ave and East 54th Street looked at a Brooklyn Daily Eagle article that hit close to home: when a new school was proposed in their neighborhood, the City suggested a location at Tilden and East 48th St, but parents disagreed:

Once we’ve found our claim and at least one counterclaim, we need to move on to the next step: locating evidence. Claims and counterclaims won't be useful for our research unless we can find the evidence that was initially used to back them up; we want to collect this evidence to potentially use in our own research, but more importantly, we want to understand how claims are constructed by being grounded in evidence.

When researching claims and counterclaims around the school proposal on Tilden Avenue, we examined our initial newspaper article to find some evidence, and we searched the Brooklyn Daily Eagle online for additional coverage of this issue, which resulted in more evidence. (For tips on searching the Brooklyn Daily Eagle and other online primary sources, check out this blog post.)

We find it useful to organize our evidence for supporting each claim on a series of graphic organizers – one for each claim or counterclaim. We use something like this: 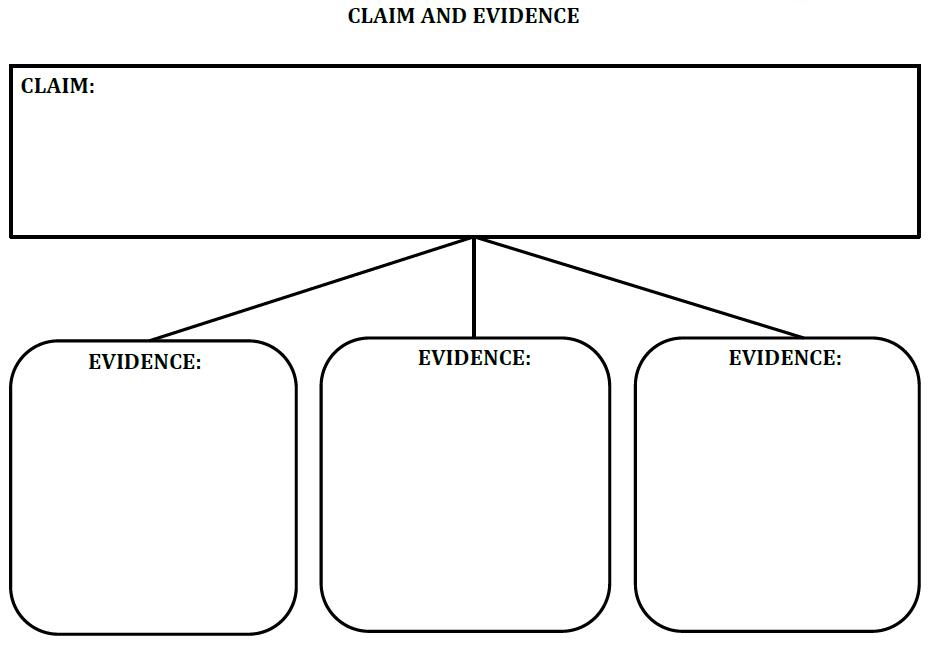 Students at lower learning levels may find it easier to work with the evidence for one claim at a time. The teacher can help students identify a claim and look for related evidence, and then a counterclaim with its evidence can be presented in the following class in order to help students conceptualize each claim as distinct.

Students at a higher learning level may be up for the challenge of identifying claims and counterclaims on their own when looking at a primary source, identifying evidence in additional sources that are presented, and linking each piece of evidence to its appropriate claim.

Students can be assessed by whether they are correctly able to identify claims and counterclaims in a source, and whether they can find evidence to link with each.

Implementing this activity with primary source material allows us to understand how multiple perspectives exist in history; students can be assessed on their ability to understand and articulate this concept, which will be demonstrated by how clearly they are able to identify and provide evidence for multiple claims and counterclaims.

This post is the ninth in an ongoing series. Read the other posts in the series: What's a Primary Source?, Observations and Inferences, Maps and Atlases, Citing Sources, Asking Questions for Research, Notetaking Skills, How can we do research with political cartoons?, and Using the Internet to Find Primary Sources.