Do you go over the river to grandmother’s (or another relative’s) house during the holiday season? If so, chances are you will cross at least one, if not several, bridges on your way there.

After all, New York City has some 2,000 bridges or tunnels—including pedestrian, car, bike, subway and railroad bridges. Then there are the city’s famous bridges, like the Brooklyn Bridge, which inspires people from around the world to come walk its 1,600 foot span.

But bridges are more than just concrete and steel structures that get us from here to there. They connect “people with people, bringing family together again,” and “turning strangers into friends,” points out Cheryl Keely in her new informational picture book “A Book of Bridges: Here to There and Me to You.” 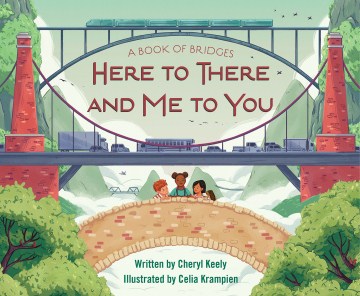 A Book of Bridges: Here to There and Me to You by Cheryl Keely; illustrations by Celia Krampien

In colorful illustrations (by Celia Krampien) and flowing read-aloud text, Keely explains how bridges can range from simple stones in a shallow stream, and shows a young girl hopping from stone-to-stone, to a grass-covered wildlife bridge in Banff National Park in Canada that lets animals cross over roads and highways safely.

She introduces young readers to some of the most famous bridges in the world and includes fun facts to hold their interest. London Bridge—known for the song and nursery rhyme named after it—was the first stone arch bridge built in Britain. It fell down over and over again, hence the song.

The Golden Gate Bridge in San Francisco is not really golden, as its name implies, says Keely, but was painted orange so it stands out from the sky and sea.

And, the Brooklyn Bridge, where in 1883, showman P.T. Barnum led 21 elephants over the bridge to prove it was safe for horse-drawn traffic.

With so many bridges in the world to inspire us, why not keep the kids entertained this holiday season by challenging them to build their own bridge out of Lego bricks?

We engineered beam bridges out of Legos during Library Lab at Cortelyou Library, and it was a lot of fun. 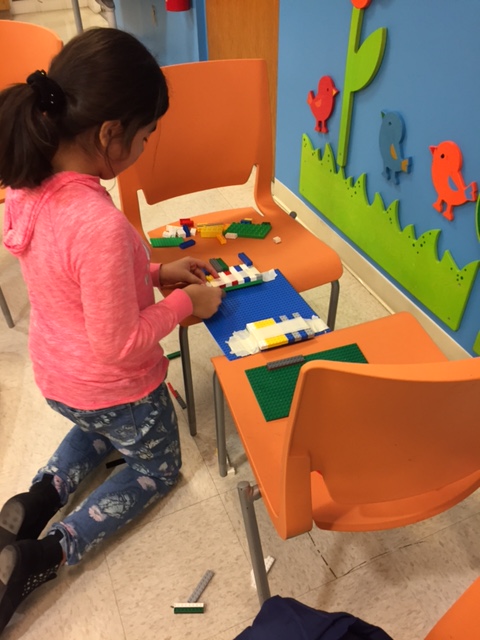 Library Lab Challenge: Build a Lego beam bridge and see how many books it can hold.

We used two chairs facing each other to create a span of about a foot in between.

Gather your Lego bricks—regular or Duplo—and one of the large plates that come with the bricks—this will be your span. To make a strong bridge span, the sides of the bridge that rest on the chair will need to be weighted down.

Let your children experiment through trial and error to find the strongest bridge design. That’s the fun part! (Hint: a little masking tape securing the abutments to the chair can make a Lego bridge much sturdier.)

When the bridge is done, test it by seeing how many books it can hold. Our record was 40 books! 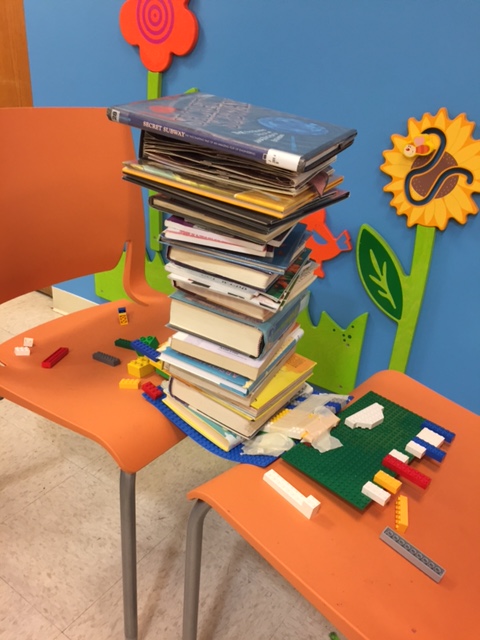 Before you start, you may want to gather the kids and watch “Galloping Gertie” on Youtube. In November 1940, the Tacoma Narrows Bridge in Washington State collapsed into the Puget Sound below. Accompanied by dramatic music and narration, the video will have everyone on the edge of their seats as the bridge buckles in the wind and collapses.

Check out these books and historical images to learn more about bridges and bridge engineering!