Bridges are icons, creating unforgettable outlines across beloved skylines. The Kosciuszko Bridge may not often have been deemed postcard worthy, but the show-stopping cable-stayed design of its replacement (opened in April 2017) is drawing nostalgia over the soon-to-be-removed historic span. Taking a closer look at the Kosciuszko Bridge – and the many bridges that have stood in the same location through centuries past – paints a picture of a changing neighborhood in a changing city.

First things first: the Kosciuszko Bridge was not always the Kosciuszko Bridge. Opened on August 23, 1939 as the Meeker Avenue Bridge, it was an impressive 384 feet longer than the Brooklyn Bridge. Notably, the bridge was delayed in opening only eight days beyond the initial plan – a result not of construction, but instead because Brooklyn Borough President Raymond Ingersoll was away on vacation. [i]

A full history of previous bridges crossing from Meeker Avenue in Brooklyn over to Queens can be read at Brooklyn Relics; the earliest is said to date to just after the War of 1812, and the original bridges across Newtown Creek at this location were referred to as Penny Bridge, in reference to a toll for crossing that remained in effect until 1881 [ii]. Even after the toll was removed, the bridge kept that colloquial name as late as the early 20th century, when we see it referenced on a piece of 1904 letterhead from The Riley Bros. Marble and Granite Works.

Looking at historic documents in the Brooklyn Collection provides clues as to what was happening in this neighborhood over past decades and centuries. To start, the 1874 Farm Line Map of the City of Brooklyn, published by J.B. Beers & Co., gives us perspective on the Meeker Bridge: 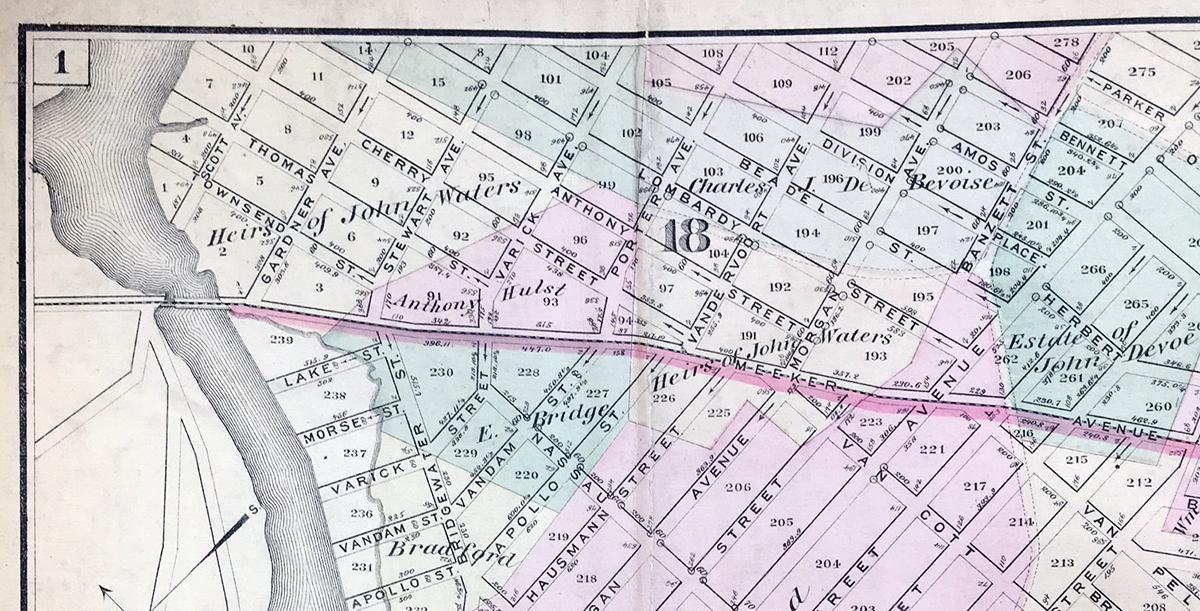 From this map, we can see that the Meeker Avenue Bridge of this era was not, in the grander scheme of things, a huge bridge. It continues across Newtown Creek from Meeker Avenue, and of course we don’t get much indication of what’s on the other side of the river because this is a map of Brooklyn, not Queens, and those two municipalities would not consolidate into the City of New York for another few decades. We can, however, see a dotted line on the bridge – a railway line, as it turns out, which served as part of the Long Island Railroad route to Hunter’s Point, stopping at Calvary Cemetery / Penny Bridge until 1869 [iii].

Calvary Cemetery takes up the portion of this map that we can’t see – the Queens side of Newtown Creek. It also explains the presence of the Riley brothers with their marble and granite business; they were kept busy building tombstones for the cemetery, and we can imagine this to be a typical business for the area at that time.

But visiting Newtown Creek wasn’t just about pastoral views and cemetery strolls. Documents tracing the history of this bridge remind us of who else was busy working in the area. Meeker Avenue Bridge, aka the Penny Bridge, broke in 1889 and was closed to the public:

While waiting for a new Meeker Avenue Bridge to be built, a wooden pedestrian bridge was erected in its place. This collapsed in January 1894, on a Friday evening at 6pm when men leaving their factory jobs rushed home from work and the wooden span couldn’t handle the surge of foot traffic.

This newspaper clipping from the Brooklyn Daily Eagle tells us more about who was frequenting the neighborhood at the time: we read about young men employed at a local chemical factory. We can’t know which exact chemical factory the article refers to, but it gives us a sense of what kind of industry was typical in the area. And it serves as a reminder that Newtown Creek was home to Peter Cooper’s glue factory – the birthplace of powdered gelatin and home of a 1845 patent for the jell-o brand.

A new Meeker Avenue Bridge opened in the fall of 1894 and remained in use until 1939. We can see an aerial view of that bridge in the 1929 Desk Atlas of the Borough of Brooklyn, City of New York (Volume 2) from E. Belcher Hyde Map Co. Inc. 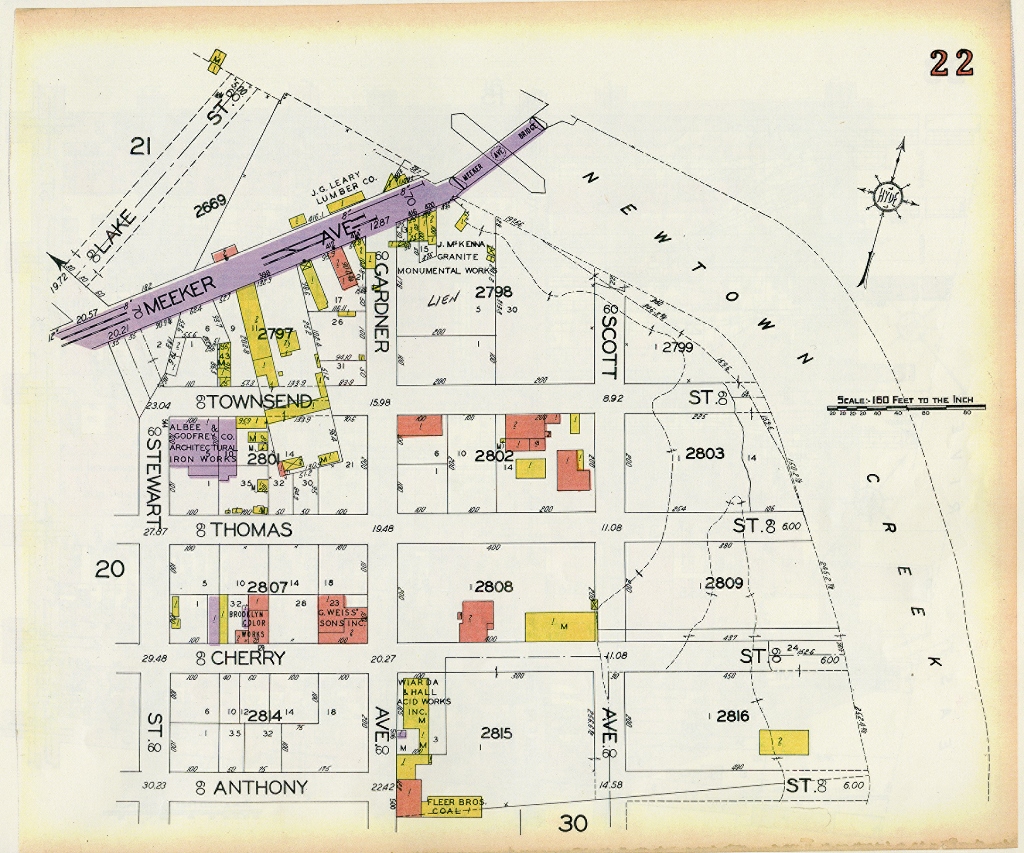 If the diagram of a bridge at Meeker Avenue on this atlas looks a little skewed, that’s because it literally was. The 1894 Meeker Avenue Bridge rotated on a center pier, allowing boats to pass on either side. From this, we can learn that traffic along Meeker Avenue from Brooklyn to Queens was not the priority of its design – twisting the bridge to let boats through was, in fact, the more critical factor.

This iteration of the bridge did its job well for several decades, but eventually we see that the changing face of Brooklyn demanded a new bridge. When our most recent Meeker Avenue Bridge was erected in 1938-39, why was it so much higher? Interestingly enough, the main concern was not to increase traffic; instead, the new design removed a center pier from the creek and allowed for widening of the waterway to smooth passageway for larger boats. Along with rail yards on the Queens side of the bridge, a 6,400 foot bridge across a 125-foot wide creek was called for. The new Meeker Avenue Bridge held the title of “longest bridge over a narrow waterway in the world”. [iv] At this point in history, Newtown Creek carried more commercial traffic mile-for-mile than any other waterway in the United States. [v] Yup, you read that right.

While increased vehicular traffic was not the main impetus for the bridge’s design, a larger span that could accommodate 10,000 vehicles per day provided Robert Moses with an important link in his cross-borough highway plan. More pertinently for the time being, it was a crucial connection for visitors enroute to the 1939 World’s Fair at Flushing-Meadows Corona Park in Queens.

So how did the Meeker Avenue Bridge become the Kosciuszko Bridge that we’ve come to know over the past seven decades? After officially opening in April 1939 with the same old Meeker name, it was renamed by official action in July 1940 followed by a ceremony in September 1940, to honor Thaddeus Kosciusko, a Polish patriot who fought in the American Revolution.

After Hitler’s September 1, 1939 invasion of Poland triggered a World War, in 1940 Mayor La Guardia formally renamed the Meeker Avenue Bridge at a ceremony attended by Poles and Americans alike, announcing that the gathering had come together “to do something more than simply name a bridge”.  La Guardia noted that Thaddeus Kosciusko had “loved liberty not only for his own country, but for the entire world”. Attorney John J. Bennett added that he was “confident that Poland will live again. Any land which breeds such lovers of freedom can never be kept enslaved. The Polish people may be captive, but the flaming spirit of Polish liberty will never be destroyed.” [vi] And so it turns out that the now-familiar name of the Kosciuszko Bridge was bestowed as an act of solidarity with an oppressed people group on the other side of the world.

A bridge is never quite just a bridge. Rather, it is the people who use it, the communities who build their lives in its shadow, and the larger city that is articulated by its outline on the skyline. Let’s all look forward to the chapter of history that our new Kosciuszko Bridge will help us record.

[vi] “Kosciuszko Bridge Is Named By Mayor: He and Bennett Tell Polish Americans at Newtown Creek That Homeland Will Live.” The New York Times. 23 September 1940.

In 1917 an ancestor of mine was the first person to fall from Williamsburg Bridge andd survive. Story appeared in NY Times on January 13, 1917, person named George Kitzer. Very interesting anecdote about another bridge in Brooklyn.