If you read about a “cyclorama” in downtown Brooklyn, maybe you would think it has something to do with bicycles. Actually, a cyclorama is a form of entertainment that was highly popular in the late-nineteenth century. The word refers both to large panoramic paintings and the circular or hexagonal buildings that were custom-built to house such paintings. In an era before movies, cycloramas were considered one of the most engaging amusements on offer, and they were extremely popular. Almost every major American and European city had a cyclorama building at one point, and Brooklyn was no exception. There used to be a popular cyclorama of the battle of Gettysburg smack in the middle of downtown Brooklyn, the current site of the Municipal Building on Joralemon Street across from City Hall (now Borough Hall). 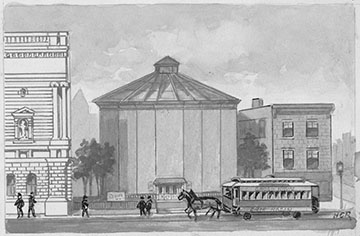 A rendering of the cyclorama building on Joralemon Street in Brooklyn. 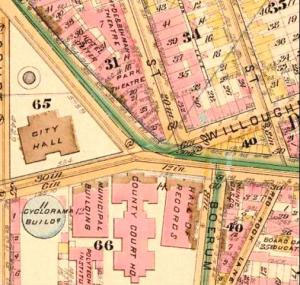 1886 map of Brooklyn showing City Hall (now Borough Hall) and the cyclorama building across the street.

The Brooklyn Gettysburg cyclorama painting was one of four made by French artist Paul Dominique Philippoteaux (say that ten times fast). The first was commissioned by a group of Chicago investors for that city in 1879 and opened in 1882. 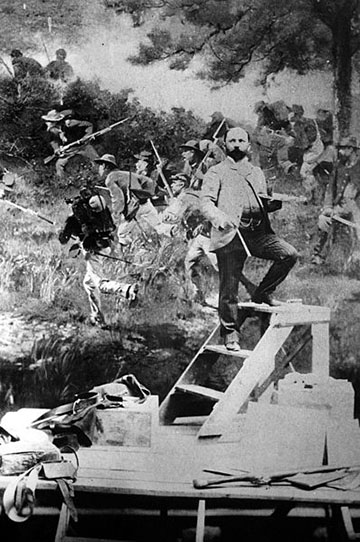 Boston and Philadelphia iterations followed, and the Brooklyn building opened in October 1886 on the site of the old Dutch First Reformed Church, which was demolished to make way for the cyclorama building. The Brooklyn Daily Eagle reported that the painting was 20,000 feet long and weighed four tons. It was hung on the curved interior of the circular building which housed it, and viewed from a raised platform.

The inertior of the Gettysburg cyclorama, Scientific American 1886.

Between the platform and the canvas, an extremely realistic diorama completed the illusion. Tons of actual dirt, live plants, three-dimensional objects, and dummy soldier figures scattered the 45 feet between the platform and canvas, decreasing in size until they matched the painting’s scale. An 1886 article in the Brooklyn Citizen declared, “the many clever devices used in bringing out the whole general effect serves to make the illusion so perfect that one imagines he is on the battlefield surrounded by soldiers and implements of war, with miles of landscape in view… It is the nearest approach to reality the artist’s brush and ingenious mind have ever accomplished.” In fact, it even fooled police officers sent to the scene to prevent a robbery, as reported by the New York Times in July 1889 (this was at the later Manhattan location of the exhibition).

In addition, the cyclorama provided education for Brooklyn residents, as well as accurate depictions of some of their hometown heroes. The 14th Brooklyn regiment, also known as the “Fighting Fourteenth,” saw heavy fighting during the war and “covered themselves with glory.” As the Eagle noted in 1898, they “earned…from the enemy the compliment of being known throughout the war as the ‘red legged devils,’ their Zouave uniform trousers having made them conspicuous in every fierce charge.” The regiment and their leader, Colonel Edward B. Fowler (for whom Fowler Square in Fort Greene is named) would have been recognizable by visitors to the cyclorama. Other recognizable figures included Major Wheeler and the 13th New York regiment as well as General Winfield Scott Hancock. 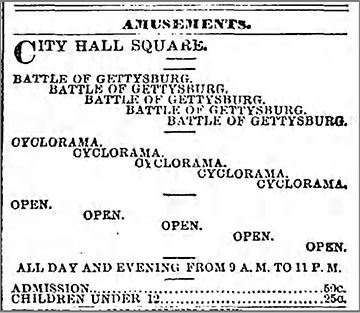 1886 advertisements for the cyclorama in the Brooklyn Daily Eagle.

The Brooklyn cyclorama was hugely popular, and was often mobbed with long lines during its first months. After about a year, however, interest began to wane, and the spectacle was moved to Union Square in Manhattan to reach a different crowd. Eventually, the Brooklyn painting was dismantled and its pieces scattered. The Philadelphia painting was lost in a fire. The Chicago and Boston paintings, however, survive today. The Boston painting made its way to Gettysburg in 1913, and was acquired by the National Park Service in 1942. After a full conservation overhaul in 2007, the painting is now displayed the way it was originally intended, complete with its diorama.

A portion of the Boston version of the Gettysburg cyclorama painting.

As for Brooklyn, it got another cyclorama in the 1920s, when a depiction of the Battle of Chateau-Thierry was installed at Luna Park in Coney Island. Even after the advent of motion pictures, Brooklyn residents lauded the realistic experience provided by the cyclorama (now aided by various light and sound effects); according to Brooklyn Life, the exhibition “broke all records for attendance” and was “no doubt, the biggest and most thrilling attraction that has been brought to Coney Island for many a year.” Private James J. Cassidy of the Old 69th Regiment, a veteran of the actual battle, told the Eagle, “It is indeed a lesson in war to prevent war in the future.” Though today the word cyclorama may sound foreign to us, to Brooklynites of years past it was a well-known and cherished entertainment.