2015 marks 150 years of the Fire Department of New York (FDNY) bravely serving New York City. I am proud to say my brother-in-law is a FDNY firefighter who started out as a volunteer firefighter. For years, Brian responded to fires whenever the loud siren was rung at the Oceanic Hook and Ladder Company No. 1 in Travis, Staten Island. As Staten Island's oldest volunteer fire house, Oceanic received its charter in 1881 and is today -- out of the ten volunteer fire houses in the city (here's a bit more about that) -- one of only two recognized and dispached by the FDNY. Both are located in Staten Island. 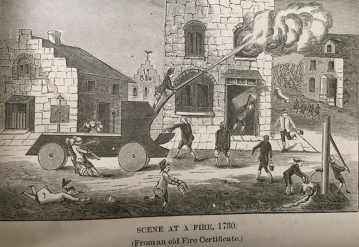 Organized firefighting dates back to 1648, but it wasn't until 1731 when fire brigades were put into service and all able-bodied people were required to respond to alarms. Due to an ever-growing population, the volunteer Fire Department of the City of New York was established in 1737. The requirements: men needed to be "able, discreet and sober."

With the introduction of the steam engine, the need for men to pump water to extinguish fires were no longer needed.

Gradually volunteer fire houses were closed and replaced by paid companies.  Today, the FDNY has more than 11,400 Fire Officers and firefighters. You can read the complete history of the FDNY here.

As for Brooklyn, the first record of organized firefighting in the city was in 1772, when six men were recruited to fight a fire near the ferry landing on Fulton Street. In 1785, seven men were appointed at a town hall meeting to be the offical firefighters for Brooklyn. In 1788 it was announced that all appointed firefighters would be exempt from jury duty and militia service -- needless to say, this resulted in men busting down the doors to sign up.  1785 brought the first organized fire house in Brooklyn. 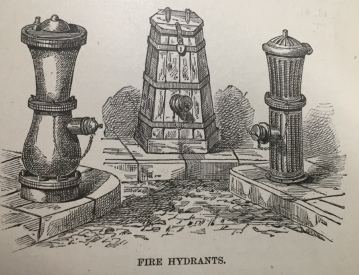 During the Civil War, the City of Brooklyn replaced cisterns with hydrants, providing a reliable source of water to fight fires.

On May 5, 1869, the act to "reorganize the Fire Department of the City of Brooklyn" was passed (the previous attempt in 1858 was defeated), which made way for the paid fire department. With the passage of the act, four fire commissioners were appointed and firemen's salaries were set at $800 a year. The cities of Brooklyn and Williamsburg transitioned their volunteer fire departments into paid companies by 1870, followed by New Lots in 1886; Flatbush, Gravesend and New Utrecht in 1894; and Flatlands in 1896. The Brooklyn Fire Department merged with New York's Fire Department with the 1898 consolidation of New York City.

"In 1823, an act was passed incorparting the Fire Department of the Villiage of Brooklyn."

As a side note, a few months ago when I was on a tour at Green-Wood Cemetery, I came across the grave of William Chin(n). I was intrigued by the inscription on the stone: "In memory of William J. Chin, Private of Engine Co. No. 20 Brooklyn Fire Department who was killed by being thrown from a supply wagon while in the discharge of his duty as a fireman on the morning of December 28, 1889." 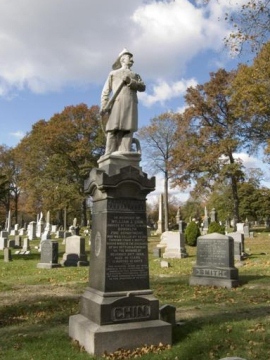 Civil War veteran Chin served as a driver for the Volunteer Fire Department. According to the Times, he was injured en route to the Brasher Oil-Cloth Works fire on 18th Street and 8th Avenue when he was "thrown from his seat by the shying of the horses at a blazing log and the wheels passed over his chest."  He experienced severe internal injuries and died shortly after on January 3, 1890. 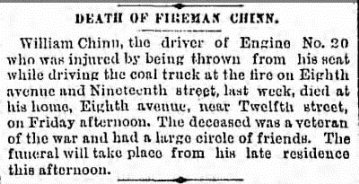 Emma Chin, his widow, sued the city for negligence, citing a defect in the street that led to her husband being thrown from his truck. The defense argued that the street was not in disrepair and that Chin was leaning over the dashboard reaching for a rein when he was jolted back as his truck hurried over to the fire. She sought $5,000 in damages in City Court but it was dismissed on January 21, 1891, after the jury could not reach a unanimous verdict (it was 11-1 in favor of Chin). A life-sized sculpted marble fireman marks his grave.

To round out this blog (and lighten the mood) here are some pictures of firemen in parades:

Volunteer Firefighters at the 1930 Parade

These men aged 80 and 92, respectively, are adorable in their uniforms! 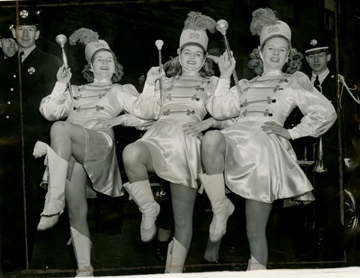 Thank you for serving and protecting us for 150 years!