Brooklyn in the early 1950s was a borough of rising crime, and the problem was steadily getting out of control. Cab drivers were held up, grocery stores robbed, and gangs fought for bragging rights in the streets. Stories of victimized residents and business owners were a regular feature in the newspaper. Something had to be done. Various community groups met to discuss strategies that would get weapons off the streets and out of the hands of the youth.

Enter the Brooklyn Daily Eagle, which along with civic leaders, business leaders, and local precincts waged a three-year campaign, one that reached all the way to Governor Dewey in Albany, with a proposal for legislation that would ban the sale and possession of menacing switchblades.

Leading the campaign was Special Sessions Justice John E. Cone. Cone worked tirelessly, speaking in front of groups all over New York, about the need for comprehensive legislation. Justice Cone had previously been Chief of the Homicide Bureau in the District Attorney's Office and had seen first-hand the effect of switchblades on the psyche of young people. He claimed "...it was a badge of distinction among teen-age gang members to possess a switchblade or zip-gun." The allure of the switchblade was evident. They were the stuff of movie gangsters. With a quick temper and a flick of the mechanism, the blade would release, and advantage was quickly gained. These "toys" had become incredibly dangerous.

Cone's fight would not be an easy one.  The switchblade had its supporters in knife makers and knife enthusiasts, many of whom lived in upstate districts. Governor Dewey was uninterested and ambivalent, choosing to side with New York state business lobby. But Cone fought on, enlisting the help of the 67th Precinct in Flatbush, which organized support of the ban as well, as the Flatbush Merchants Council and Americans for Democratic Action.

Among the many others who worked alongside Justice Cone were Senators Fred G. Moritt, Herbert I. Sorin, and Assemblyman Ben Werbel, whose son had been slashed with a switchblade. Werbel and Sorin drafted a bill in 1953 to ban the sale and possession of switchblades. By the time it got through the legislature, however, it was so watered down it was rendered worthless. Cone and his supporters took a half-a-loaf approach and vowed to fight on, agreeing only to a bill that limited the sale of switchblades to minors under 16.

The Brooklyn Daily Eagle devoted considerable journalistic resources to the cause. In addition to op-ed pieces and letters to the editor, reporter Leslie Hascom wrote a series of in-depth articles about the violent impact switchblades had on the people and neighborhoods of Brooklyn. Keeping up the drumbeat, the Eagle maintained a box next to every article about switchblade violence that read,

Even after defeat of the 1953 bill Cone kept up the pressure. Sensing victory in the winter of '53, he did not let up, and exhorted Brooklynites to inundate Albany lawmakers with telegrams in support of the stricter comprehensive ban.

In the end, the governor could not ignore the onslaught from Brooklyn, and on March 28th, 1954, New York became the first state in the nation to ban the manufacture, sale, and possession of switchblades. 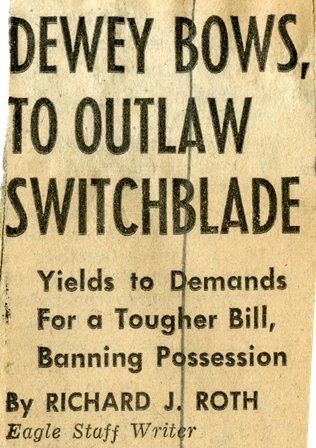 After the victory Cone declared, "It will take away the toy that kills from the adolescent and the favored murder weapon from the adult criminal. The ban could not have been secured without the support of the Brooklyn Eagle."

A period of amnesty followed right away, allowing knife owners to quietly turn in their blades, without fear of prosecution.

April 7, 1954 - Responding to warnings by Police Commissioner Francis W.H. Adams that owners of outlawed switchblade knives should turn them in, a citizen hands blade to Lt. Francis X. Grattano and Patrolman Joseph Graham, right, at Bergen St. stationhouse. Those who turn in knives immediately won't be prosecuted.

Since that battle was won exactly 61 years ago, times have indeed changed. Many states are reversing their switchblade laws, acknowledging that the weapons famously used by the "Sharks and the Jets" hearken back to another era. Furthermore, citizens with no evil intent have been arrested, and jailed for possessing knives used for maintenance jobs.

But for one moment, Brooklyn was front and center in a national struggle for saftey... a struggle that continues.