Central Library will be closing on Saturday, May 21st at 2 pm for Night of Ideas. Masks are currently required inside BPL locations for the health and safety of our staff and patrons.

Sometimes, all it takes is an episode of Bob's Burgers to ignite a historical research adventure!

In the episode aptly named "Topsy," Louise devises a scheme to take revenge on an obnoxious science teacher who is obsessed with Thomas Edison. While researching for her science project at the local library, Louise and her siblings stumble across a video of an elephant being electrocuted by the Edison Electric Company. Louise cackles with delight at the idea of smearing the reputation of her teacher's beloved hero in front of the entire class, "I'm going to tell everyone the truth about Thomas Edison, the Electro-cutioner!"

Was Thomas Edison present and responsible for Topsy electrocution? Was Topsy really a "bad" elephant? I needed answers, so I turned to the Brooklyn Daily Eagle for accounts of what led to that fateful day in January 1903. 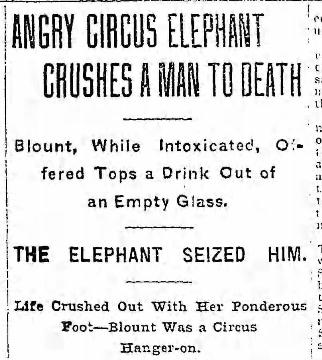 The headline that spelled the beginning of Topsy's demise in The Brooklyn Daily Eagle on May 28, 1902.

Topsy did indeed kill a young circus-follower named J. Fielding Blount while in Brooklyn with the Forepaugh Circus in 1902. According to the Eagle's article, Blount snuck into the sleeping elephants' tent early one morning, offering nine other elephants whiskey from a glass before he reached Topsy.

As bizarre as this sounds, this was actually a common practice in the circus at this time that the elephants were accustomed to -- and even looked forward to -- before their first meal of the day. But, Blount was a stranger and a drunk one at that. When he offered Topsy the near-empty glass, seeing the lack of whiskey, she expressed her displeasure by tossing him up and throwing him fatally to the ground with her trunk.

An illustration of Topsy in the Brooklyn Daily Eagle, which accompanied the headline on May 28, 1902.

After that incident, Topsy began to be referred to as a "bad elephant" by the newspaper. (Other reports of killings by Topsy exist and are even mentioned in the Eagle, but cannot be confirmed directly by multiple sources.) She was put in chains and made to do "penance" for her lethal act. By the end of the year, Topsy had changed owners a couple times to end up in the hands of Luna Park, which was preparing to open to the public in the spring of 1903.

At Luna Park, her handler was arrested twice for animal cruelty and disorderly conduct. The third time he was arrested, Topsy followed him to the police station and poked her head inside. Perhaps it was out of some strange sense of loyalty to her handler or simply curiosity. Either way, the owners of Luna Park had gotten their fair share of publicity out of her antics and were done dealing with the drama of this "bad" elephant. Her owners fired her handler and, in December 1902, announced that the elephant would soon be put to death by electrocution.

There is in fact no mention in the Brooklyn Daily Eagle or the New York Times of Thomas Edison himself being present on the day of the electrocution. What is mentioned in the January 5, 1903 Brooklyn Daily Eagle article is that the, "Chief Electrician P. D. Sharkley of the Edison plant at Coney Island had been secured and with the assistance of Electrician Black of Luna Park several wires were strung from the plant, two blocks distant to the park."

From the evidence at hand, Thomas Edison was not present for the electrocution of Topsy. However, his company did send a film crew to record the event. (That video is the same video Louise and her siblings found over 100 years later on Youtube.) And it is here that we can begin to see the bigger picture -- wherein America's beloved inventor certainly played a role in Topsy and many other animals' demise. 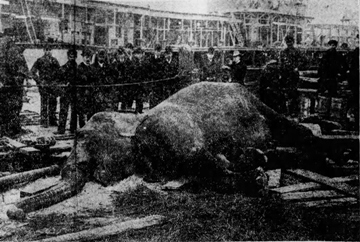 A photograph of Topsy from the Brooklyn Daily Eagle taken moments after her death at Luna Park.

Beginning in the 1880s, Edison's direct current (DC) was threatened by the alternate current (AC) system, designed by Nikola Tesla and distributed by George Westinghouse, which was more powerful and could carry electricity for longer distances. Seeing the new technology as a danger to his business and his pride, Edison began advocating that AC was too dangerous to provide regular homes with electricity and should only be used for implementing the death penalty. This spurred the use of the electric chair as a common means of "humane" execution in the United States.

To prove AC's deadly nature to both experts and the public, Edison worked with an electrical engineer by the name of Harold P. Brown to carry out public demonstrations of electrocution with the AC system on dogs. Though many were horrified at these blatant acts of animal cruelty, experiments continued on various species over the years. Edison's Electric Copmany recorded many of them, including Topsy's, despite the fact that his opponent, Westinghouse, had already won the War of Currents by the early 1890s.

We can conclude, then, that Topsy's unfortunate death was most likely the result of her owners not wanting to deal with an animal too unruly to safely contain and not solely for the egomaniacal amusement of Thomas Edison, as Louise from Bob's Burgers would have us believe. That said, one doesn't have to dig too far into the annals of history to paint Edison as an evil cartoon villain either.

For more information on the unfortunate life and death of Topsy the elephant, check out this book by Michael Daly available at the Brooklyn Public Library. 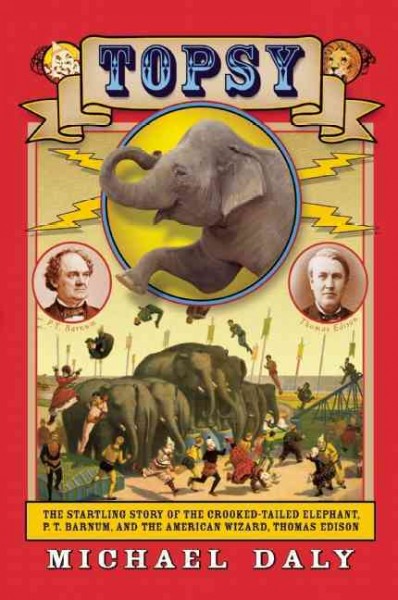 There is a very telling gap in this story. Experiments in animal electrocutions were from 1888 over a few years. Edison was kicked out of his electric power company in 1892, the end of the &quot;war of currents&quot; came with the formation of GE. Topsy was executed in 1903. Edison had no stake in DC in 1903, and the company he used to run had gone AC by then. Edison also did not run the company &quot;Edison Manufacturing Company&quot; which shot the films. Edison Manufacturing Company was always shooting films at Coney island to fill their coin operated kinetoscopes. Those facts pretty much give Thomas Edison no role in the death of Topsy.