Summer is just around the corner, with its balmy breezes and skin-licking sunshine, prompting among Brooklyn youth the understandable urge to break free from the confines of a drab schoolday and spend the afternoon lolling in the park, strolling down the avenue, or staging a massive protest at City Hall.

At least that was one way of reading the events of late April 1950, when thousands of students all over the city spilled out of their schools and into the streets, disrupting the school day, traffic, and life in the city in general. 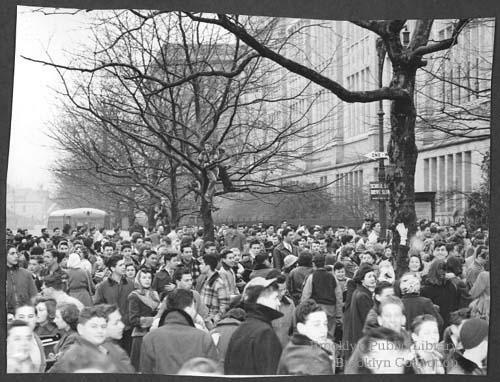 Although student protest is a standard part of the history of the civil rights and anti-Vietnam War movements of the late 1950s and 1960s, this early uprising on the part of the collective student body had a slightly less inspiring catalyst -- the loss of extra-curricular activities.  But perhaps that is too flip an explanation; the core of the issue was teachers' salaries.  Mayor O'Dwyer was at the time resisting the call to raise teacher pay by $600 per year to meet a rising cost of living.  To stress their point, teachers across the city refused to put in extra, after-school hours supervising the various choir groups, photography clubs, and athletic teams that students cherished.  Extracurriculars were in turn suspended entirely, which was all the motivation students needed to act in solidarity with their teachers.  Without the pom-pom squad or school newspaper to keep them occupied in the evenings, the teenagers of Brooklyn found themselves with plenty of time to plan a massive political action.

Above, students from the Brooklyn High School of Automotive Trades gather in McCarren Park and chant "We want our teams".

The strike started out on a relatively small scale.  400 students from Fort Greene's Brooklyn Technical High School refused to enter their classrooms on the morning of Tuesday, April 25, 1950 and instead congregated in Fort Greene Park before marching across the Manhattan Bridge to the steps of City Hall, where they demanded higher pay for their teachers.  At New Utrecht High School, 600 students also walked out in protest.  The walk-outs were quelled by noon that day, with school administrators dismissing the strikers as "troublemakers seeking excitement."  They were not so easily dismissed the next day, when more than 2,500 students marched to City Hall, this time pulling membership from Manual Training High School, Girls High, and George Westinghouse Vocational School, Franklin K. Lane High School, and Abraham Lincoln High School, among others.  The teenagers proved adept at rallying their peers to the cause, as students leaving their own school would drop by the halls of their erstwhile academic and athletic rivals to drum up more support.  Brooklyn Tech's principal, William Pabst, guarded against such incursions by posting sentries at school doors to keep his students in and other teenagers out. 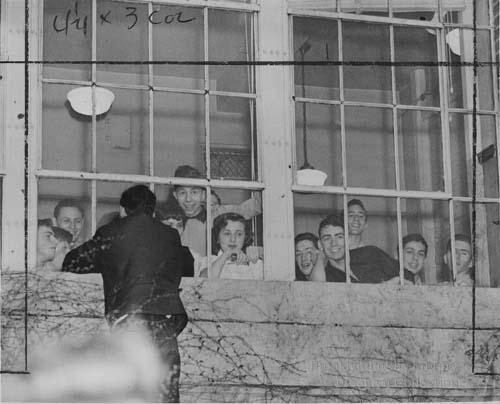 A student from Thomas Jefferson High School scales the wall outside James Madison High School in an attempt to persuade fellow students to join the strike.  What do you expect when you name public high schools after revolutionaries?

This second day of striking was, by the Brooklyn Eagle's account, much more violent and disorderly than the first.  "Knots of youths climbed the 3d Ave. elevated stairway and slid down on the roof... a 30-foot stretch of iron pipe fence was knocked down. Several girl students were knocked down and trampled." In addition to the 2,500 students who showed up at City Hall, another 3,500 staged demonstrations at their schools.

Then came Thursday, April 27th, when the strike swelled to more than 20,000 students from "practically every public high and vocational school in Brooklyn."  According to the Eagle, the sheer number of students marching across the Manhattan and Williamsburg Bridges en route to City Hall prompted police to barricade the pedestrian walkways of both bridges on the Brooklyn side, literally forcing the students underground as they took to the subways to cross the East River. 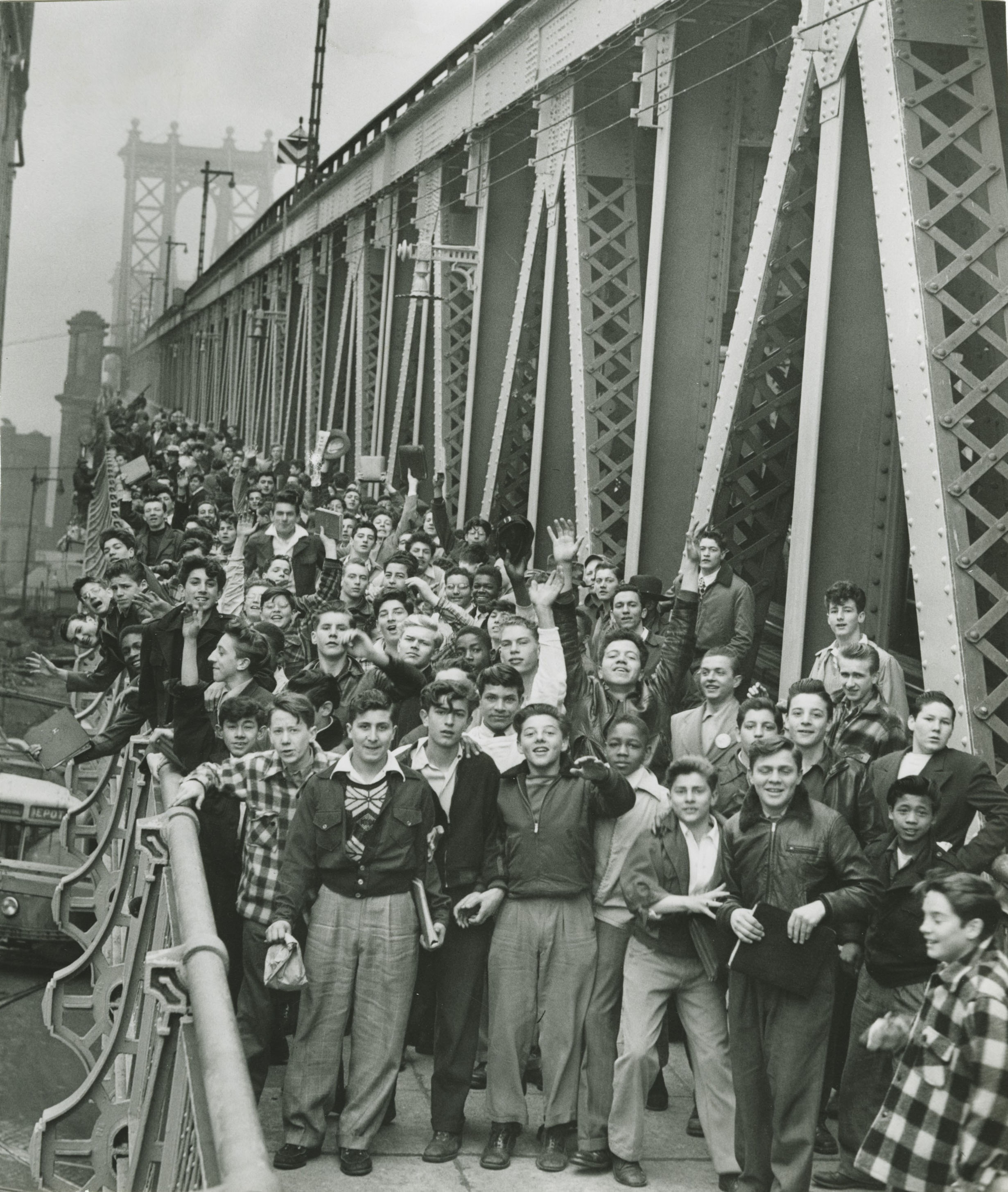 Above and below, students show their enthusiasm for civil disobedience as police try to control crowds marching across the Manhattan Bridge. 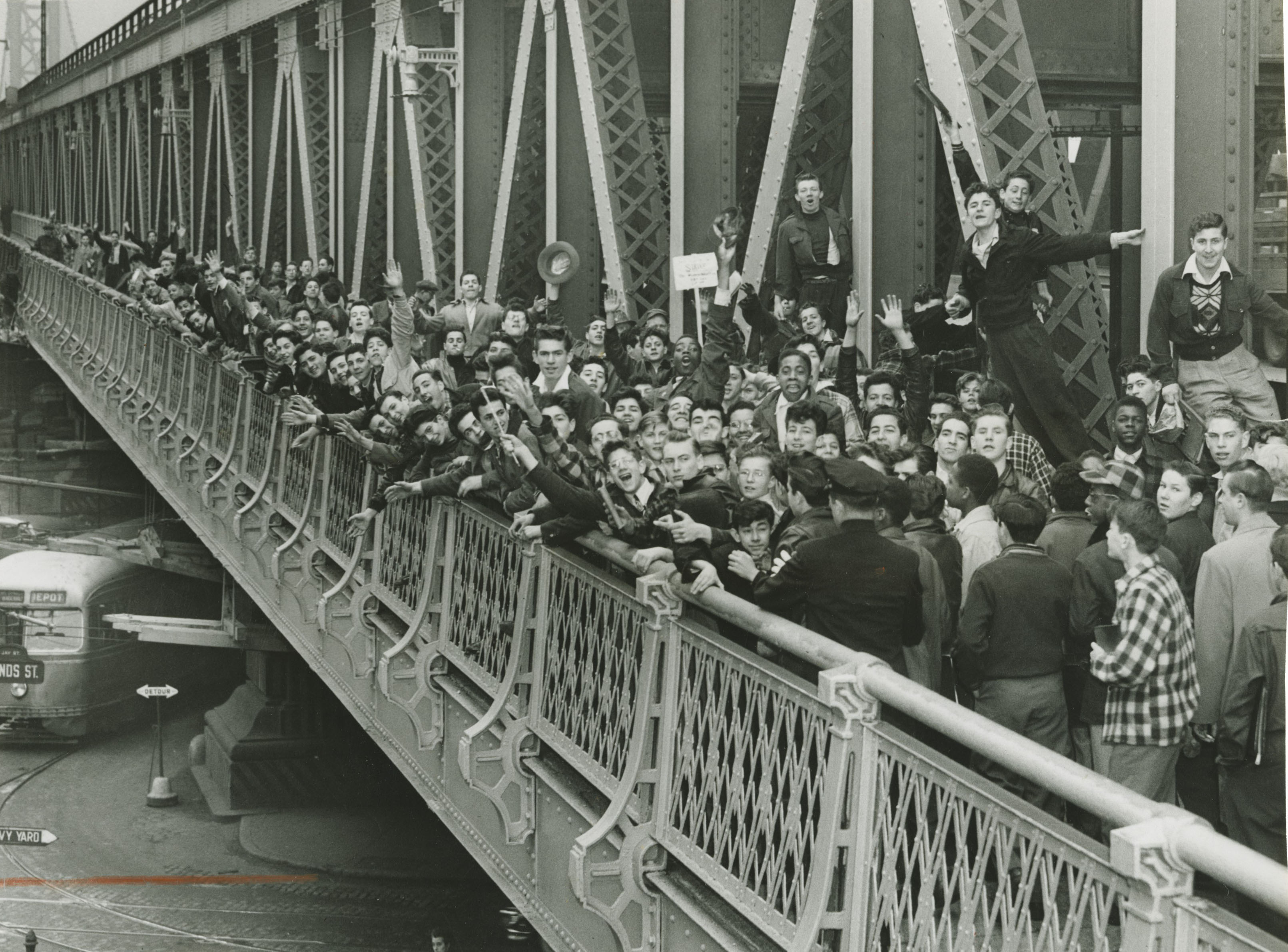 Accounts from the City Hall area indicate that the strikes weren't just a day in the park.  Mounted officers tried to control crowds of students whose progress toward the Mayor's office was foiled by barricades and a force of 64 policemen.  At Foley Square students overturned a parked car and one student reportedly threw a switchblade at a police horse.  Despite the efforts of adminstrators at Brooklyn Tech to keep their students in the building, and despite their claim that none of their students participated in the April 27th demonstrations, the Brooklyn Eagle photograph below, showing a boy in the melee wearing a telltale Brooklyn Tech jacket, told a different story. 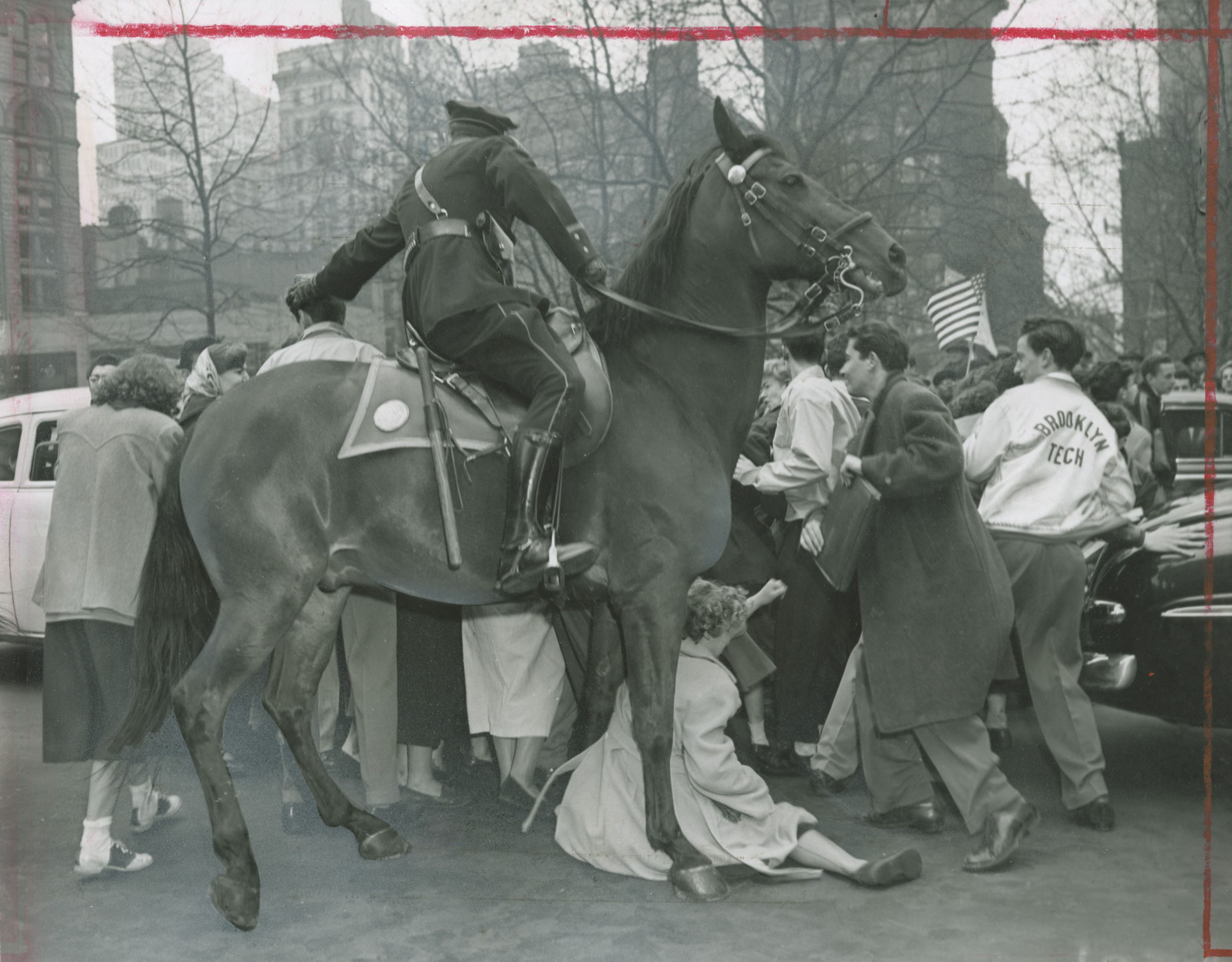 After three days the protests died down considerably, with no more than a thousand or so students arriving at City Hall on Friday the 28th, and most schools reporting their attendance as normal.  The sudden decline in participation was attributed to threats by Mayor O'Dwyer and Board of Education officials to track down the rabble rousers who led the walkouts, but even so, many were surprised at how quickly the protests petered out.  Eagle reporters listening in on a police radio overheard one patrolman dryly remark, "Hey, where are our little darlings this morning?"

In the aftermath of the demonstrations, blame was variously laid at the feet of Mayor O'Dwyer -- for refusing to meet with student organizers after the first day of striking -- and at those of the teachers -- who supposedly urged students to fight on their behalf.  Stoking this latter claim was fear of Communist infiltration of the school system.  On May 3rd, Superintendent of Schools William Jansen suspended eight teachers without pay because of suspected Communist leanings.  Jansen's investigation was launched before the student sympathy strike, but it wasn't a stretch for many imaginations to draw a thick red line connecting the two.  One Eagle editorial noted, "The riotous street scenes have never been witnessed in this city before and resembles only the sort of Communist disorder which has occurred in a few troubled spots abroad."  (Those interested in Jansen's hunt for Communists among the teachers' ranks can consult a new book in our collection, Reds at the Blackboard by Clarence Taylor.)

Regardless of what forces were instigating the protests, statistics gathered by the Board of Education clearly indicated that Brooklyn provided the bulk of the participants, with 12,140 teens from this borough walking out of classes compared to 8,452 from the rest of the boroughs combined (not that it was a competition... but if it had been, Brooklyn won).  Despite the impressive turnout, the student strikes failed to force administrators to comply with teacher demands.  In fact, it would take another 18 months of negotiation between the High School Teachers Association and the Board of Education before a pay raise compromise was reached.  Extracurricular activities finally resumed when students returned to school in September of 1951.

I was a sophomore in Thomas Jefferson HS in Brooklyn in April 1950, and for some reason, I never heard about this protest demonstration at all! LOL! Perhaps because I had to go to work after school, and didn't have time for such activity! LOL!