By 1899 Newtown Creek had become so gummed up with pollutants that men could walk atop the water as if it were earth. The odors themselves that hung in the air were so substantial that children could perch upon them as though sitting on the wooden ostriches and horses of a carousel, to circle above the copper smelters, oil tanks, and tallow shops of the creek. And in order to sink pylons for new docks, laborers had to use handsaws to cut holes in the grime-thick water, the gelatinous bricks they extracted being sent off to the candle makers who carved their wares from the jiggling blocks. Flowing between and creating the boundaries of Kings and Queens County permitted this kind of magic; the creek, neither here nor there, existed in a limbo free from the familiar laws of this universe. So it wasn't just as if a literal New Town had sprung from the dregs of industrial New York, but as if a whole new noisome and slimy world had bubbled to the surface in this no man's land. 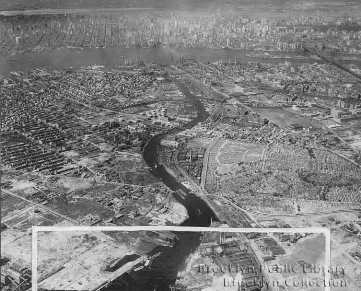 These anecdotes -- men walking on water, children riding vapors, workers quarrying gels -- are, obviously, untrue. But though the Eagle writer who teasingly reported on such oddities in 1899 may have been out to give his readers in the Eastern District, wearied from the noxious air of the creek, some playful comic relief, his accounts of the fetid miracles yet allude to the wicked legerdemain of the industrialized world: gasses to solids, skins to glues, fats to soaps, and water to goop. This is where all of Brooklyn's waste came to be transformed, and the dross of the borough perhaps had no greater conjurer than Peter Cooper and his glue works. 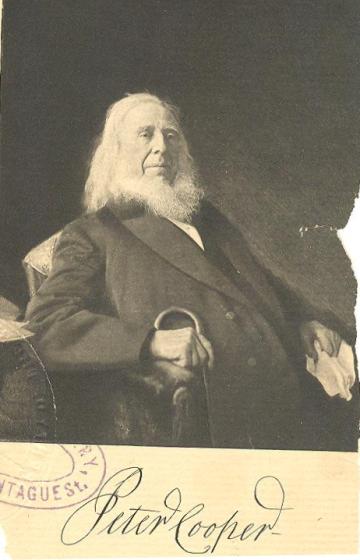 Portrait of Cooper in the biography by Rossiter Raymond published 1901.

Born in 1791 and dead by 1883, Cooper led a long life as a talented inventor, successful manufacturer, and lauded philanthropist. As a boy he worked alongside his father, assisting him in his successive occupations as hatter, brewer, and brickmaker. From 1808 to 1812 he was apprenticed to a carriage maker. He invented a machine for shearing cloth, manufactured cabinet ware, was for a time a grocer, and finally established his glue factory, first in Manhattan near Kips Bay and later along Newtown Creek at Maspeth Avenue and Gardiner Avenue. Though his glue business made him rich, Cooper continued to invent and expand his business interests. He built iron works in Baltimore, a rolling and wire mill in New York, and blast furnaces in Pennsylvania. He designed and built the first American locomotive engine in 1830 and in 1845 made the first rolled iron beams for building purposes. He was also among the earliest to promote the laying of trans-Atlantic telegraph cables. And though he is long since gone, you'd be hard pressed to find a New Yorker who wasn't familiar with his name, attached as it is to the Cooper Union, which he established in 1853. On top of all that, he once ran for President as candidate of the Greenback Party (the oldest presidential candidate in history, at 85) and was the father of former New York City mayor, Edward Cooper, and father-in-law to another former mayor, Abram S. Hewitt. It's no wonder the Eagle published this reverential obituary upon his death. 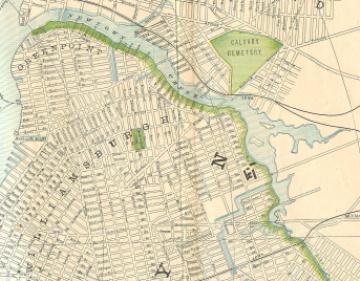 Despite all of his accomplishments, when it comes to Brooklyn, Peter Cooper's name is glue.  The map above, a page from a 1902 Rand-McNally Atlas, gives a pretty good picture of Newtown Creek at the turn of the century. And if you look just to the right of that letter "N" you'll see a cluster of black rectangles. 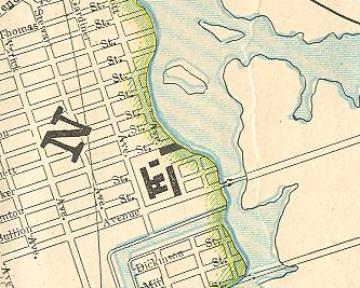 These represent the Cooper Glue Factory. It's remarkable because the only other structures depicted on this 1902 map of Brooklyn are the buildings at the Navy Yard, the Main Post Office, City Hall, the Brooklyn Kings County Penitentiary, and the Raymond Street Jail near Washington Park (now Fort Greene Park); so out of 6 structures worth mapping, the glue factory was one. 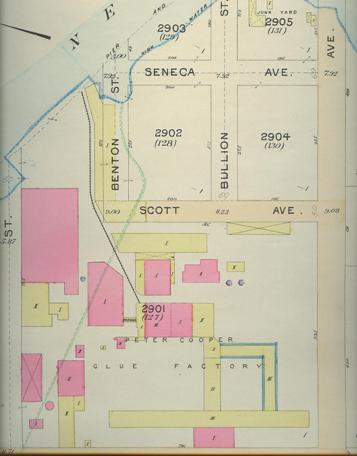 Detail of the factory from a 1904 Belcher Hyde Atlas. Pink buildings are brick; yellow, wood frame; yellow outlined in blue, wood frame covered in iron sheeting; buildings with an "X" through them are stables; that black zipper heading from the buildings to the water is a rail line; both Maspeth Ave. (on the right) and Scott Ave. (perpendicular to it) were cobblestone streets.

A 1911 Eagle article which appeared under the headline below gives a good indication of the factory's size as well as it's profitability.

According to the article, Cooper's was one of the largest glue factories in the world, with a capital of $1,600,000 and an annual output valued at $2,000,000. The 500 people employed there drew an annual total in wages of $312,000. And in case you were wondering exactly how the glue was made, the article goes on to describe the process. 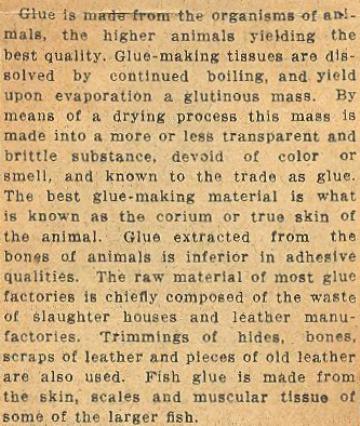 But life for the glue makers wasn't all wine and roses -- or, as it were, corium and cash. About a decade after Peter Cooper died, the glue works, now headed up by the two former mayors, Edward Cooper and Abram Hewitt, came under constant scrutiny by Brooklyn Mayor Boody and his health inspectors in what the Eagle termed The Glue War. 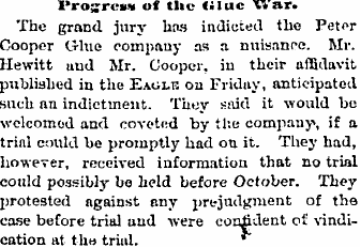 At issue was the pollution generated by the factory and its effect on the inhabitants in the area. Numerous "cowboy-style" raids into the glue works were conducted by the Nineteenth Precinct, leading to many citations and shut-downs. Most of the citations were given for violation of section 385 of the penal code, which prohibited "the assisting, aiding, or abetting in the commission of an act that interferes with the comfort, repose, health or safety of any considerable number of persons." Apparently throwing "gas tar" and other junk into the creek wasn't good for people.

But some workers at Cooper's factory had it far worse than those residents who simply couldn't stomach the stench. This article ran in an August 31, 1900 edition of the Eagle.

Other horrific stories from the glue works include those of a 15 year old boy who was crushed to death by an elevator, and a workman, James Mildren of Maspeth Avenue and Oliver Street, who was found hanging from a beam in the storehouse, despondent over gambling losses.

Death for the factory itself came in 1915, when nearly all of the thirty buildings comprising the old works were torn down. Cooper's glue, however, wasn't done yet. Having found a new home in what was said to be the largest and best equipped glue manufacturing plant in the country, just outside of Buffalo, New York in a town called Gowanda, Cooper set up shop. And today, on the other side of New York State, his legacy still lives on, as the Peter Cooper Landfill Superfund Site.

Well done. Really fascinating. Some holes in the story so I'd love to know more about Mr. Cooper's glue factory. That mayor who went after him was my great-grandfather. My father remembered him saying in old age that his greatest regret was not having voted for Lincoln in 1864.
What a great article!
This came from Mom today. So I looked it up and found this site. "Grandma Bush had a cousin, Helen, that lived in Boca Raton. She married into money. The guy owned a glue factory, Peter Cooper Glue, in Poughkeepsie, PA, I believe. Don't know the status of it to date.". I obviously do not know the validity of this but it's worth checking into. I know Poughkeepsie is in NY. Lol
Very interesting background regarding the Peter Cooper glue factory on Newtown Creek. Peter Cooper from my research had a factory at a different location prior to this location and was moved due to controversy over the smell. Also please note additional information regarding the Gowanda, NY location in the link below. This was not started by Peter Cooper, but was renamed from the Eastern Tanners Glue Co. to The Peter Cooper Cooperation by Richard Wilhelm, who was considered "The Glue King," for his consolidation of the glue industry by 1930. https://www.wnyhistory.org/portfolios/businessindustry/gowanda_glue_king/gowanda_glue_factory.htm