"He was strapped to a window frame just a few feet under the huge clock.  The cold of a November morning swept away from the gilded dome of the Williamsburgh Savings Bank above him.  He shifted his weight.  The wind snapped at the chamois strung around his neck. Below, toy-like cars and tiny figures wove a crazy pattern in front of the Long Island Rail Road station."

This vivid, poetic storyline from the November 16, 1952 issue of the Brooklyn Daily Eagle describes not the antics of some real-life Spiderman, but rather the daily grind of one humble 34-year-old New Yorker, Ed Kemp. 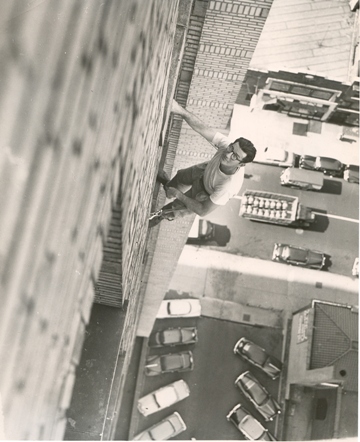 Kemp was an employee of the Standard House and Window Cleaning Company, on 126 Broadway in Brooklyn; a window-washer with seven years experience under his belt.  His particular task at the Williamsburg Savings Bank was a cruelly sisyphean one -- on the first of every month, he started cleaning the topmost window on the 43-story building, and slowly wound his way downward, washing window after window after window by hand so that, weather permitting, he would have cleaned all 1,100 windows by the end of the month.  His reward for completing this herculean task?  Starting over again at the top of the building for another long, spiralling descent. 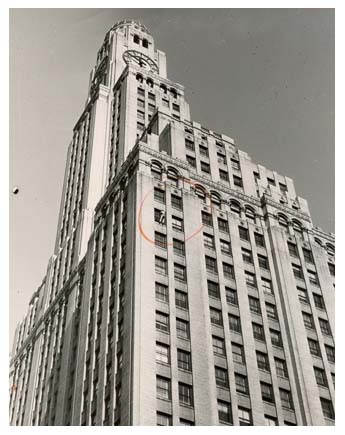 In its half-page story, the Eagle paints a surprisingly thoughtful portrait of Kemp and his solitary life in the sky.  Gone is the newspaper's usual brisk and boisterous tone, replaced in this piece with sometimes wistful, sometimes reverent prose. 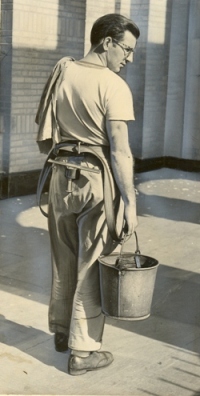 Kemp emerges as a quietly heroic figure, a "husky six-footer" who without complaint braved dizzying heights in service to the strangers he saw only through a glass, darkly.  Gazing in on men and women working, talking, laughing, living, he remained always separated from them by those hundreds of window panes, suspended in his own quiet, windy limbo.

While Timoner portrays the work of a window cleaner as a grimly noble struggle against ambient dirt and pigeon dung, the job was also an inherently dangerous one.  As the pictures show, Kemp was held up only by a harness belt that clamped onto a window frame with no scaffolding or platform to support him.  Earlier Eagle articles show that even these meager safety measures were hard-won.

A brief article from November 3, 1929 describes a protest march to City Hall, attended by five hundred unionized window cleaners.  In addition to demanding a ten percent pay increase, they wanted the city to take action against building owners who had yet to install safety hooks on building exteriors.  They had lost 84 members of their ranks to fatal falls since 1928.

Another article, from 1937, describes the harrowing experience of one cleaner, James Osman, whose safety belt broke while he was washing panes on a building in Manhattan.  He dangled sixteen stories in the air, above a crowd of 2,500 gawkers, until a plucky telephone operator found a seven-foot pole to offer out the window to Osman.  He was pulled to safety, and a generous superintendent gave him the rest of the day off. 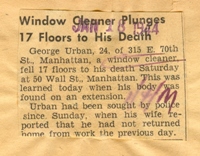 Not so lucky was George Urban, who fell seventeen floors in January of 1944.  His lifeless body was found on a protruding extension of an office building on Tuesday the 18th, two days after his wife reported to police that he hadn't come home from his window washing job.  That same year, state legislators enacted a new, stricter safety code to protect workers.  This required old, rusted anchor bolts on the exterior of buildings to be replaced with non-corrosive ones, so that cleaners could trust the supports to which they strapped their safety belts.  Building owners had difficulty complying with the code, however, because of wartime shortages in materials.  A New York Times article from November 18, 1945 reported that skyscraper windows had gone unwashed since July of that year as window washers awaited the installment of safer anchors and hooks.  A dirty pall fell over the high-rises of New York City.

Even after buildings were brought up to code, the life of a window washer was full of hazards -- not the least of which was human error.  In March of 1946, one Brooklyn cleaner fell four stories to his death after forgetting to fasten his safety belt.

What of our man in the sky, Ed Kemp?  Did he harbor a fear of falling?  Ever stoic, he replied, "I wouldn't be up here if I was afraid."  It seems for him the greater danger was loneliness.  Kemp said of his job, "It's a good life.  Lonely.  But you see people, even if you don't speak to them.  They're sociable enough but they kind of look at you like they feel sorry for you." 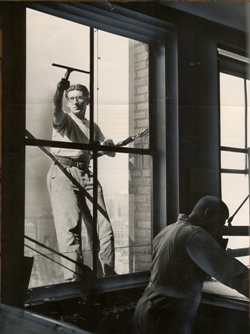 What a sad story - poor, lonely Ed Kemp. Whatever became of him?