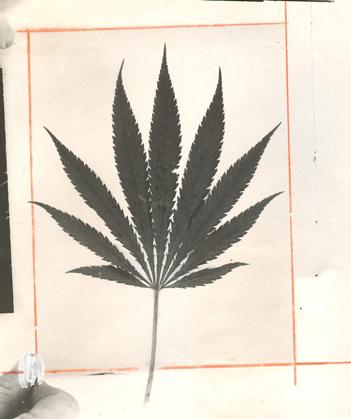 In the summer of 1951 New York City was a marijuana jungle. From underpasses in the Bronx to empty lots on Avenue X, the razor-toothed fronds of 10 foot tall Cannabis sativa plants could be seen all around the city happily waving in the wind like any other innocuous and legal weed. But for all their persistence in invading the city's forgotten horticultural corners, these plants were likely waving farewell: New York was no friend to pot.

Over the course of the summer about 41,000 pounds of marijuana were uprooted and destroyed during a campaign to eradicate the psychotropic stuff from vacant lots in the city. After Queens, Brooklyn accounted for the largest haul -- about 17,200 pounds. Though the bust in the above article occurred in Greenwich Village, the leader of this group of "strikingly pretty girls" and musicians copped to finding his marijuana "somewhere in Brooklyn." As to what they were doing "sitting hobo style around a man preparing marijuana in a frying pan" is, however, anyone's guess.

Responsible for all this destruction was General Inspector of the city's Sanitation Department, John E. Gleason, who headed up a special "White Wing Squad" charged with harvesting and incinerating the dubious crop. Here we see him standing in a cornfield, arms akimbo, as his men lay the prized narcotic at his feet. The Eagle reported that the "drug plant" was growing here in "lush impudence." 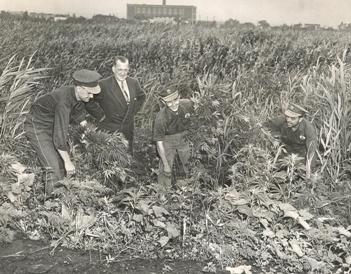 Though sounding like a team of angelic superheroes, the "White Wing Squad" was in fact a group of run-of-the-mill sanitation workers. The term "white wing" was a nickname given to the city's Strongest in the 1890s when Colonel George Edwin Waring Jr., as head of the Sanitation Department, decided to dress his garbage men in white duck cloth uniforms with the aim of instilling some badly-needed martial order in what he saw as a rag-tag crew. As Edwin G. Burrows and Mike Wallace, authors of Gotham, relate, these white uniforms weren't the only regulations imposed upon sanitation workers at the time -- in addition to the pristine duds, Waring's troops were barred from entering saloons, using foul language, and neglecting horses. Far be it from me to presume knowledge of a 19th century garbage man's soul, but how were men charged with cleaning up the 2.5 million pounds of horse manure and the 60 thousand gallons of equine urine that collected in the city's streets supposed to refrain from profanity and drink? Who knows -- but as mysteries go I suppose it ranks right up there with the marijuana omlets those Beatniks were frying up in the Village.

Anyway, back to the naughty plants at hand. In our photo collection we have a number of photographs showing these White Wings (though now their outfits are a rather darker shade of drab) out picking plants as tall as Christmas trees, carting plants away, and burning great piles of prohibited plants. It was an epic battle of Man v. Nature and Man was showing Nature -- in this case, not Everest or the Atlantic but rather a scrawny weed -- who was boss. 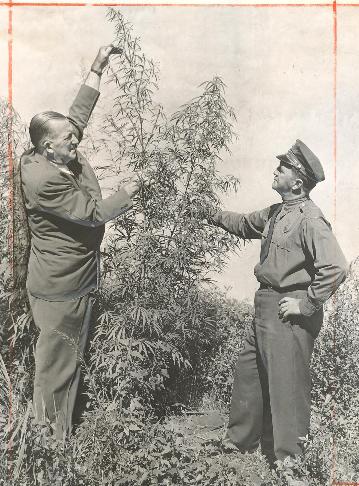 In this photo, captioned Plenty of Dream Stuff, we see Inspector Gleason and Denis Healy, Sanitation District Superintendent for Greenpoint and Williamsburg, taking the measurements of one especially lofty specimen. At this point in the summer -- August 2nd -- the Sanitation Department had already dug up "millions of dollars" worth of plants from the "marijuana plantations" of Brooklyn. But just how many millions of dollars had these pop-up plantations disgorged? In an earlier Eagle article from July 28th 1951 detailing the "daring marijuana farmers" who had established a "farm" in a lot at the heart of Brooklyn's projected Civic Center, the estimated value of all the marijuana destroyed in Brooklyn was reported to be nearly $6,000,000. So by August 2nd the total value of pot destroyed in Brooklyn alone must have been well north of $6,000,000. Plenty of green dream stuff indeed. 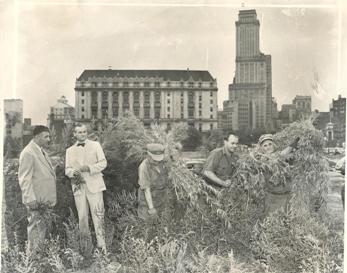 The proposed site of the new Civic Center wasn't the only municipal hot spot for impromptu pot farms. Here we see inspectors from both the Sanitation and Police Departments overseeing a harvest in the shadow of the Brooklyn Federal Building. On the left we have Inspector Frank Creta from Sanitation and on the right a very nattily dressed Deputy Inspector from the Police Department, Peter E. Terranova.

But these high profile plantings were the exception. More often than not these so-called marijuana farms were found growing in anonymous vacant lots such as this plot on Livonia Ave. and Warwick St. 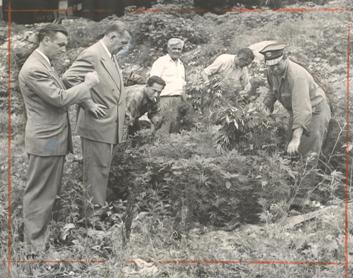 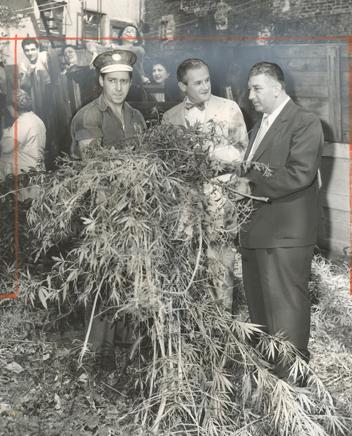 After being felled and used like safari beasts for some photo ops, the plants would then be taken to Sanitation Department incinerators in Woodside, Queens where Chief Inspector Gleason was on hand to oversee the fiery eradication. 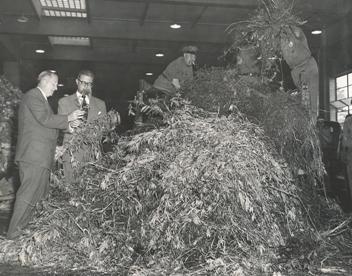 The 7 photos you see here in this post all come from a file labeled Crime: Drugs: Marijuana -- it's a pat taxonomy indeed, and constitutes a kind of shorthand for what was, and is, the law of the land.

And since laws, from the minute they are conceived, are both buoyed and attacked by supporters and detractors alike, I thought for sure we might find in these photos of Gleason's marijuana vigilantes some pro-pot faction, unintentionally caught by the lens of the Eagle photographer, standing by in the wings betraying in their expressions a softness in their hearts for the demonized plant.

And in looking closer, beyond the posturing of the suits and the cops, you can just make it out -- it's a certain sort of conspiratorial glimmer, a smile, a shadow of a smile, some flicker of dissent passing over the face...

maybe it's there in the grin of the white wing... 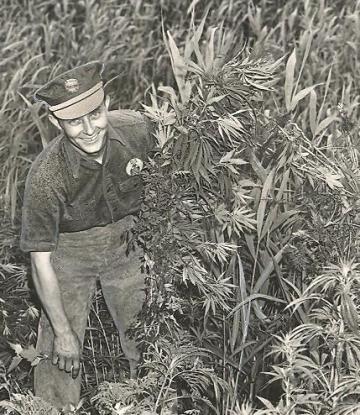 or in the fishy cigarettes of the laborers... 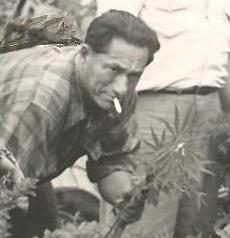 or in the full-on-bliss of the woman whose yard accounted for 100 pounds of the evil, malevolent, impudent, illegal, notorious dream stuff. 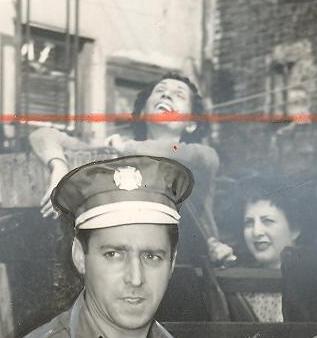 And though the story of marijuana in the summer of 1951 may end here, the story of crime didn't end for everyone involved in this crusade. Looking for a little more information on General Inspector John E. Gleason I dug up a photo file of him. At first glance it loooked like just more of the same -- Gleason standing beside a sanitation worker sternly appraising a freshly bagged pot plant -- but there on the back of one of the photos was glued an article from May 14 1953 headlined: Gleason Draws 3 1/2 Years in Probe of Fuel Extortion. Turns out our do-gooder Inspector was found guilty on four counts of lying to a Grand Jury which was trying to find out who succeeded James J. Moran as head of the $500,000-a-year fuel oil installers' extortion racket in the Fire Department.

Thanks for this report on an a surprising aapect of life in Brooklyn in the1950s. I would never have guessed rhe extent to which Brooklyn had &quot;gone to pot.&quot;
Amazing work and thanks for uncovering this fascinating aspect of occult (i.e. hidden) Brooklyn history!
I doubt the Brooklyn fields were seeded by Johnny Potseed. Likely a few seeds got tossed out by smokers, and birds and the wind did the rest. In 1968, two college friends of mine drove out to Kansas and harvested loads of the weed from along the roadside, likely remnants of the WW2 hemp program. It wasn't very strong, even by 1968 Mexican pot standards.
Just think - when they outlawed cannabis, nobody knew what it was or what it looked like. Now, thanks to our government, EVERYBODY knows what it is and what it looks like. Good work!
I am the local historian in our local library. Isn't amazing what you come across. I love the story and the pics. Very good research.
the quality of the was extreamly poor but had an intresting taste. was there somked dat.
What a great story! Who would have thought that Brooklyn was a haven for cannabis in the 50's! Sounds like what your friends got a hold of is what they call &quot;ditch weed&quot; as it grows wild everywhere out in the west. From my understanding it is not very potent and is very rough on the throat.... Not only was there a WWII program but our founding fathers were strong proponents of cannabis. Jefferson called it a &quot;rightful remedy&quot; and G. Washington said to plant the seed &quot;everywhere&quot;.... Too bad our government today is not interested in the personal freedom of its people anymore... www.MedicalMarijuana.com a NEW declaration of independence
Good Job, Great Article! I look forward to more keep up the Great WORK~!
Brooklyn is a lot more fertile than most people who live know.
There is a book that points out that this problem was growing for decades in New York. Its title is Weeds: An Environmental History of Metropolitan America.
The first photo showing the confiscated herb in a "corn field' is certainly not that. Look closer-it is much more like the marsh grasses you see in the wetlands all over the metro area, like the Meadowlands, Hudson River marshes, etc.