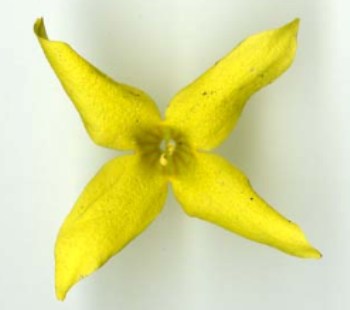 Is there anything better than walking through Grand Army Plaza, around Prospect Park, or down Eastern Parkway in the spring?  Our eyes are so ready for some color, and at last the delicate daffodils appear, and tiny buds  on the trees float in a green haze above us.  And then too there are the skinny branches shooting from the ground covered with  buttery flowers swarming the stalks--Forsythia! 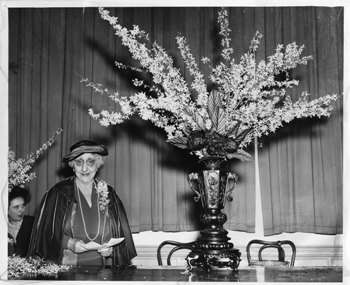 Seventy years ago Mrs. Florence A. Blum lobbied to make Forsythia Brooklyn's official flower.  To her, Forsythia was "a symbol of unity and brotherhood at a time when world conflict is in force."  In 1949, 50 Forsythia plants, cut from Brooklyn shrubs, were accepted by Eleanor Roosevelt for the United Nations and were planted in the hope that "the message of these golden flowered plants would play a real part in the deliberations of that great body." 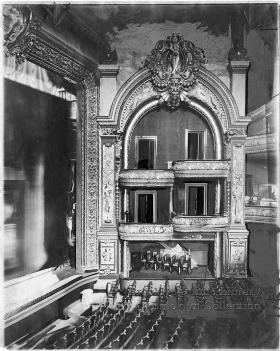 The Flaming Forsythia was a highlight of the Coney Island peacetime pyrotechnic display in 1947.  The flower was featured at this festival because its message of peace unites three continents.  A relative of the olive tree, a token of peace, it is a native of China.  British botanist William Forsyth brought it to England, and from Europe, it found its way to America and to Brooklyn where it was adopted as the offical flower by Borough President Cashmore on March 18, 1940. 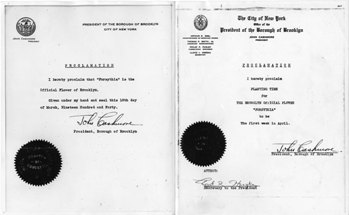 When Borough President Cashmore declared that Forsythia was Brooklyn's official flower, he also declared the first week in April "Planting Time" for planting forsythia in Brooklyn.  Forsythia Day was celebrated on a different day each year.  The Brooklyn Collection has dozens of photographs that show  Brooklyn residents coming together to plant Forsythia all over the borough.  Thanks to their efforts, the delicate bursts of yellow reappear each spring.

In the above photograph from the Brooklyn Daily Eagle, Mrs. Francis Burk doesn't let her heals and fur coat get in the way.  She is planting the "stringy bushes that will later blossom in a multitude of golden flowers".  The Eagle ends the caption noting that the scene was duplicated many times all over Brooklyn on April 10, 1940.  The Forsythia brought so many people together! 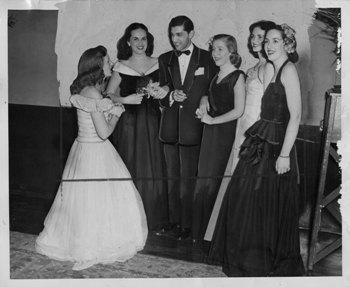 The Forsythia Queen was given the honor of officiating over the borough's Forsythia planting ceremonies.  In 1940, Forsythia Queen Barbara Evans of Flatbush planted a forsythia on Brooklyn Day at the World's Fair.  In this photo, we see five potential Forsythia Queens standing with bandleader Charles Turecamo. 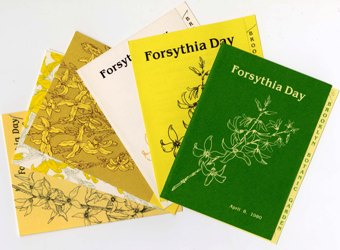 The Brooklyn Botanic Garden began giving out The Forsythia Award in 1954.  This prize, which is no longer awarded, honored a civic and philanthropic leader of the borough for his or her contribution to the community's prosperity.  The recipient's accomplishments had to embody the same symbolic meaning as the Forsythia itself: brotherhood, unity and understanding.

Florence Blum died on February 10, 1959.  Without her, I'm not sure that Brooklyn sidewalks would glow golden in April.  In lieu of flowers, her family requested that donations be sent to the Brooklyn Botanic Garden.  Mrs. Blum established an endowment fund, the income to be used to further the ideals of Forsythia Day and to "link the floral beauty of the Brooklyn Botanic Garden with the well-being of the community."  While Forsythia Day has been phased out, the spirit of the flowers has not been lost.  Brooklynites will come together at the beginning of May to celebrate Sakura Matsuri.  Check back for my next blog post to see a brief history of one of the most beautiful festivals held in Brooklyn.

Thank you for providing this information. I really enjoyed reading about how forsythia became the official flower of Brooklyn.
I loved from the first time I saw it, now i looking for a place to get one and planted in front of my house to enjoy the view in my front porch