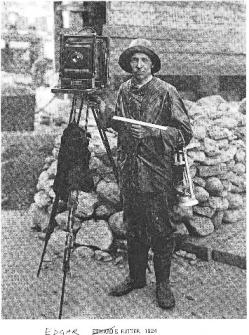 Some may find this hard to believe but--librarians can make mistakes.

Sometimes we know very little about the photographers whose works we find in our collections. Photographs by E.E. Rutter can be found not only in the collection of Brooklyn Public Library but also in Queens Borough Public Library and the Brooklyn Historical Society. A recent telephone call from a colleague in Queens alerted us to the fact that we may have been perpetuating a mistake as to Rutter's first name. In several documents in our control file he is named Edward E. Rutter. His images are often signed simply "Rutter" and his studio is always advertised as E.E. Rutter, so how the mistake crept in is a  mystery.

We checked Ancestry.com for census and other records, and indeed we found that the man we had been calling Edward was actually called Edgar. He had a photography studio at  number 8, 4th Avenue (among other locations) and was the official photographer for the Borough of Brooklyn.  In the 1920 census he was living on State Street with his wife, Ellen; born in Maryland, he is listed as a "Photographer" with his place of work a "Photo Studio." (In fact, his workplace was often a busy intersection, and the census erroneously gives his birthdate as 1880, but we who evidently live in a glass house will not be throwing any stones.)

A World War II Draft Registration card again has an Edgar E. Rutter, "Own Business Commercial Photographer" --but this time the birth date is given as  September 15, 1883. A Social Security Death Index record shows an Edgar Rutter of the same birth date who passed away in New Jersey in July 1964. We still don't know his middle name, but if we had continued to refer to him simply as E.E. (which he seems to have preferred) there would be no problem.

The subjects covered in our collection include Bush Terminal, Coney Island (with many images of the boardwalk and some well-muscled lifeguards)  New Utrecht, Williamsburg, Pigtown, bath houses, various new civic buildings, sewer construction, the 13th Regiment Armory and more. To the gods of cataloguing we have made reparations. In due course more of Rutter's photographs will make their way into our catalog, but for now we thank Mr. Brian Merlis for permission to use the self-portrait shown above, with pixellation that happened at our end, not his. 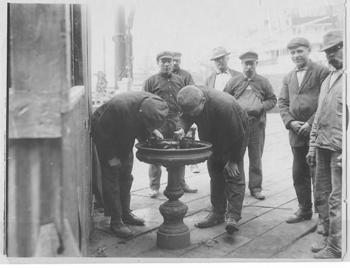 Mr. Rutter was the grandfather of my late husband, Richard John Healy. I am currently in possession of photos that he made at Coney Island and other locations. Mr. Rutter had two sons, Edgar and Edward and one daughter, Gladys Rutter Healy.
Ms. Healy, I am searching for a photo/s of Sheepshead Bay, New York, where my husband's father owned a restaurant. The time period is circa 1920-1931. If you are in possession of any photos of the wharf/pier area of Sheepshead Bay during that time period, I would be very interested to know more about that. Sincerely, R. Karalekas
Ms karalekas, I think, I know a man named Nick, that worked in a restaurant on emmons ave. In Sheepshead bay in 1930s, he's in his 80ys, and told me stories when he brought fish to the restaurant, if u can get the name if the restaurant & I'll ask him