To close out Native American Heritage Month I thought a post about the community of Mohawk Indians that lived in Brooklyn would be in order. For more than three decades, starting in the 1920s, the Mohawk Indians from the Kahnawake reservation near Montreal, Canada, made the Boerum Hill section of Brooklyn their home away from home. This close knit community grew and prospered and left their stamp on Brooklyn, as well as on the skyline of New York. At a time when New York was being transformed, skyscraper after skyscraper, Mohawk men began making the journey from Kahnawake to New York, looking for work on steel constructions as riveters and iron workers.  The building boom created many of the city's most famous landmarks -- the old Yankee Stadium (1923), The Empire State Building (1930), The George Washington Bridge (1937) -- and the Mohawk played a crucial part in the creation of these buildings. 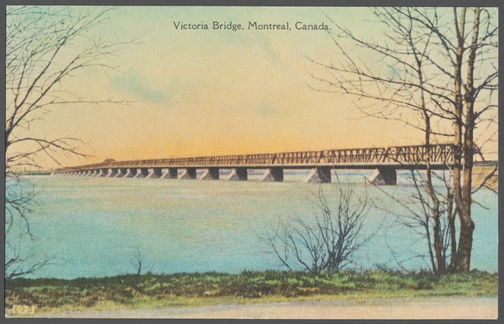 The story of the Mohawk's relationship with steel and, eventually, with Brooklyn, has it's beginning in the mid 1800's with the construction of the Victoria Bridge over the St. Lawrence River. The bridge's north abutment needed to be constructed on Mohawk land.  To secure the rights to build there, the railway agreed to hire several Mohawk Indians as unskilled laborers to work on the tubular structure made of riveted iron plates.  According to company history, an executive viewed several young Mohawk walking along a high ledge. Being in dire need of men who would not be afraid of heights, he decided to train the Mohawk laborers in steel construction and riveting. The skills learned were passed through the family, with fathers teaching their sons, nephews and cousins. As more and more Mohawk learned the trade, their reputation as excellent ironworkers grew.  These skills were in great demand, and at the bridge's completion they began to search for other construction opportunities.  They found them throughout Canada and the U.S., and by the 1920's the Mohawk Indians were recognized as experienced steelworkers.  In spite of the depression, this period saw a building boom in New York City, and the Mohawk from Kahnawake were ready to make the most of it. 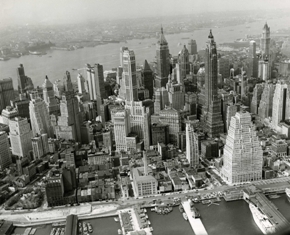 The Mohawk trek to Brooklyn for construction work was steady, but the men did not stay in place very long.  They stayed mainly in rooming houses then went back to Canada at the end of a job.  This changed in 1926 when Paul Diabo, a Mohawk iron worker, was arrested in Philadelphia on charges of being an illegal alien. The U.S. government argued that he was in the country illegally and was not eligable to work. His defense team used the 1812 The Treaty of Ghent which states that all rights and privileges lost during the War of 1812 be restored to Native Americans, including the right to travel freely from Canada and the U.S., and that the Mohawk were recognized as a separate nation irrespective of the U.S. and Canada.  His victory in this court case meant that the Mohawk were free to travel and work in the two countries without fear of harrassment. The ironworkers could bring their wives and families with them and settle within a community. New York in the early thirties offered many opportunities for these men, and they began to migrate from Canada in greater numbers. From October to June they lived in what is now the Boerum Hill section of Brooklyn. Bounded by Court Street, Douglas Street, 4th Avenue and State Street, "Little Caughnawaga" became the home of the largest group of Mohawk outside Canada. 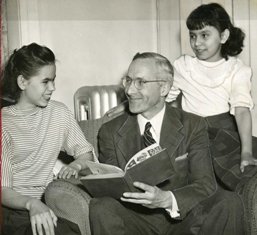 As the building boom continued, the Mohawk community grew and prospered.  The Wigwam bar on Nevins St (formerly Conelly's Abbey Bar) and the Spar on Atlantic, became popular community centers. In these establishments the men exchanged information about jobs, arranged trips to Canada, and passed on the news from back home.  Children attended P.S. 47 and Nathan Hale Junior High. Churches attended by community members included St. Paul's Church and, most notably, The Cuyler Presbyterian Church.  This church, located at 360 Pacific Street, was frequented by many in the Mohawk community. The Reverend David Cory, to show his acceptance and respect for the newcomers, learned the Iroquois language and held sermons in Iroquois on Sunday evenings once a month. Along with Mohawk parishioners he also translated a hymnal and held afterschool classes on the Iroquois language. 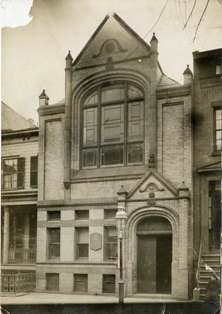 The late 50's saw the number of Mohawk in Brooklyn reach an estimated 500-700 people. But the building boom was also coming to an end, and with it jobs in the construction industry. The Mohawk men began to look for work elsewhere in the States and Canada.  By the 70's little remained of "Little Caughnawaga."  The Cuyler Presbyterian church is now a private residence, and The Wigman and the Spar are gone.  But memory of the Mohawk's sojourn in Brooklyn lives on in the iconic buildings and structures that define New York today.

" A lot of people think Mohawks aren’t afraid of heights; that’s not true. We have as much fear as the next guy. The difference is that we deal with it better. We also have the experience of the old timers to follow and the responsibility to lead the younger guys. There’s pride in walking iron." —Kyle Karonhiaktatie Beauvais (Mohawk, Kahnawake)

On November 2, 2009 PBS premiered To Brooklyn and Back: A Mohawk Journey by Reaghan Tarbell.  Check your local PBS station's schedule for repeat showings. The Smithsonian Institution has a traveling exhibit on the Mohawk steelworkers. A signed copy of  David M. Cory's book, Within Two Worlds (New York: Friendship Press, 1955) can be found in the Brooklyn Collection. 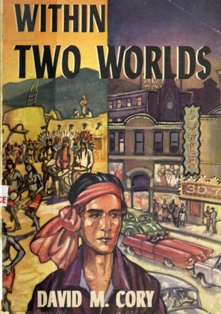 Love that cover art!
A great post. Readers may be interested in Joseph Mitchell's piece on the high steel Mohawks in the New Yorker archives for subscribers: http://www.newyorker.com/archive/1949/09/17/1949_09_17_038_TNY_CARDS_000222031 and, for the bookish like myself, in his collection Up in the Old Hotel. Also, readers may be interested in information about the 1907 Quebec Bridge disaster, which killed 75 iron workers, including many Mohawks. http://www.civeng.carleton.ca/ECL/reports/ECL270/Introduction.html
Hi, that was a great post! I am doing research for a paper about mohawk ironworkers and I was wondering where the info came from? The book? Do you have any suggestions for sources on the topic? Thanks :) Nia:wen in Mohawk ;)
great to let the world know of this Little Kanawake. Although, you know, my father, from Odanak, and all siblings lived and worked in Brooklyn along witht he Mohawks. They tell stories of the Wig wam bar, and another of my Uncle Sammy Watso getting shot in the 60's by a tipsy detective while living and working there. We are Abenaki of the Odanak Reserve on the Canadian side, but most of live in Stateside, Albany, NY!! Thank you, Denise L. Watso
Things like this really fires me up. Everyone from every Country has been calling America &quot;The Land Of Opportunity&quot; here they deny ppl the right of the chance. Calling us Illegal Aliens, when we share the same longing as any other human being. Every person on this earth, wants the best for their siblings, children, family, etc. I think that USA has false advertsing about everything they have to offer. It should be labeled, to American Citizens only. How good were they when they couldn't even treat their own African Americans with the same respect that were from their country, no disrespect. But to disrespect any other kind for that matter is sooo totally unhumain. We are human, of the same skin, organs, blood..not animals. And for the government to take away land, or to even own land, that they can't even look after themselves is just wrong. I could understand if they actually lived on the land and prospered from it like our ancestors did, then it wouldn't be something to argue about. But they say this is their's, that's their's....and we only fight about the little peice of area they gave us to begin with. Unless we are bought off. They pay each band member five bucks a year. I grew up wondering what was this for, cool. Now that I know what it's for, it's belittling.Excuse me for not knowing how to spell some words, I'm only indian, as they would say. America isn't the land of Opportunity, the land that America owns is haunted and unsafe for a reason. We fight for our land because it is ours, what you gave us...our treaty deal..you take it away like you could do better. Here our earth is disolving in front of our eyes because of your hurt, and so called ways. Our Earth is now cleansing itself, and don't know who is going to survive this...but it's happening now. Your stupid Government Bullshit ain't going to help you.
is there still a community out there? im moving to NYC soon.
Is the postcard of the Victoria Bridge, Montreal in the public domain, or is does it belong to BPL. I would like to use it in a book I am writing. Please e-mail me at [email protected] and I can give you the details. David McDonnell
Anyone know any old timers from the Wegwam or Spar bar? I'm looking for Harold Horn or Gordon Day.
To mr m hurley harold horn my uncle past away a few years ago gordon day still lives in kahnawake mohawk territorys
To blaik, I'm very sorry to hear about Harold's passing he was a good friend. Thank you so much for the information.
If any of you knew a Howard Jacob Horn(e) please let me know. He was born in 1916, son of Dominic Two Axe and Anna Horn. [email protected]
To Blaik, I hope your uncle Harold went peacefully I think of him often and I hope his family is well. He was very good to me. I miss him and have been missing him for over 40 years. The times were not right for us. So it just would'nt work for us. but I found out too late how much I loved him. I don't want to offend anyone. I just hope Harold will be able to hear me when I tell him. I'm almost 50 years late in letting him know I loved him. You are in heaven now and I still have a connection to you Harold I Love You and we will meet again.
HI MY NAME IS ROBBY THATS MY NICK NAME MY BIRTH NAME IS ROBERT ROBINSON I AM IN WHITE PLAIN N Y I AM FROM STOCKTON CA I AM ON JOURNEY TO MY PEOPLE HERE I COME OUT OF LODGE IN JUNE OF LAST YEAR CREATER PUT THIS IN MY HART I AM 1/2 MOHAWK MY GRANDMOTHER IS FROM KAHNAWAKE SO I AM TOLD BY MY MOMTHER GRAND MOTHER IS MARY ANN DIADO THAT HER MADEAN NAME TRY TO CONECT WITH SOME ONE ABOUT MORE 411 LOOKING FOR ELDERS I BEEN HERE FOR ABOUT 5 WEEK INEED MORE HELP I DO NOT KNOW ABOUT COMPUTERS MY GRANDMOTHER IS BAURIED IN BROOKYN MY PLONE # IS 561 275 4423 ANY TIME CALL THANK U