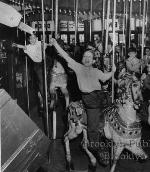 Summer is quickly coming to an end, and soon our favorite boardwalks and amusement parks will be closed for the season.  As we roll, spin, slide and gallop our way into fall, few of us will notice that many of our favorite rides were designed by a Brooklynite.

In 1882, a 16 year-old German by the name of William F. Mangels emigrated to New York City.  The young amusement enthusiast found himself at the right place at the right time.  Coney Island was the epicenter for the amusement industry.  The latest and newest rides were being manufactured blocks from the beach and tested on the massive crowds that arrived by train and trolley each weekend.  Within four years of arriving in his new home, Mangels opened his own factory, hoping to make a name for himself in the industry of fun and recreation.

Like most amusement manufacturers in the late 20th century, the W.F. Mangels Company of Coney Island specialized in carousels.  Mangels collaborated with Coney Island's best wood carvers and mechanics, many of whom were immigrants themselves.  In 1907, he patented a version of the overhead gears that controlled the up-and-down "galloping" motion of the horses.  Mangels' design became the standard, and Mangels himself became a leader in the field.

Once every park had a carousel, it was time to explore other forms of amusement.  Mangels designed over 39 different "devices" in his career, including the Tickler in 1906 and (my personal favorite) the Whip in 1914.  The Mangels Company also developed some of the first "kiddie" rides.  Our collection has an undated brochure for one of Mangels' creations:  the Coney-Car.  The catalog illustrates the ingenuity and thought that went

into Mangels' work.  Schematics show how the car utilized the third rail system, often seen in subways and trolleys.  Photographs depict men, women and children enjoying the "real driving" experience that kept customers coming back for more and more. 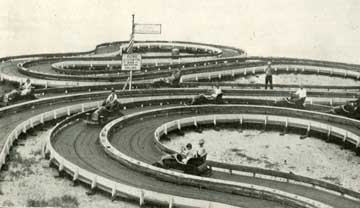 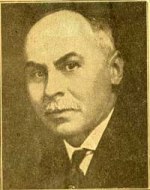 Mangels had a wide reputation as both an expert and risk-taker in his field.  His rides could be found as far away as New Zealand.  In 1912, the Palisades Amusement Park asked Mangels to design one of the first wave machines.  Years later in the Eagle, Mangels said he was grateful the Palisades had not requested a ride to the moon because he probably would have attempted that too.  During the Depression, park owners across the country called Mangels for ideas.  He seemed to enjoy being of use and often answered questions by mass producing a new contraption or cheaper ride.

In 1929, Mangels earned the right to open the American Museum of Public Recreation only 100 yards from his own factory (other cities had also competed for the honor).  The museum was an eclectic mix of archival papers, ride models and ride parts - including a menagerie of carousel animals.  In an editorial to the Times he argued that the museum celebrated "human reaction to play as expressed through play facilities man has created and developed."  But Mangels struggled to find financial and popular support, and the museum was a short-lived venture. 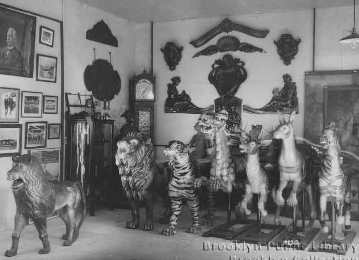 Even in his old age, Mangels checked in on his factory three or four times a year.  His was not a career, but a true labor of love.  In 1952, he published a history of the amusement industry, defending his belief that amusement parks existed because "man has ever been fun-loving." The Outdoor Amusement Industry: From Earliest Times to Present was one of the first works to outline the history of an industry that had always been perceived as truly modern.  Mangels spent years writing his opus, researching the evolution of amusement at the British Museum and other institutions.  His work gave historic background to many modern amusements, tracing items like the carousel back to "ancient royal tournaments of medieval times." 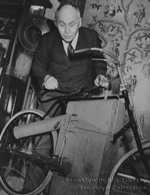 In 1958, 92 year-old William F. Mangels died in his home on Ocean Parkway, only blocks from the boardwalk.  He is buried in Green-Wood Cemetery, but his legacy spans the globe.  Today, a few of his original rides are still operational, but almost all modern-day rides reflect the ingenuity and passion of this "amusing" Brooklynite.