In the midst of World War II, the parishioners of St. Rosalia's Church in Borough Park made a pledge:  if the war came to an end, they would construct "a lasting memorial to the ideal of peace."  By 1948 ground was broken for one the greatest churches in Brooklyn, a $1,000,000 devotion to the Queen of Peace - Regina Pacis.

Regina Pacis Votive Shrine, at 65th Street and 12th Avenue, was (and still is) a model of Italian Renaissance design. It was a two-story building with 1,500 seats on the main floor and 1,200 more in the basement chapel.  It was the second Catholic church in the country to have air conditioning (at a cost of $70,000).  The 150-foot steeple was topped with four spotlights that illuminated an engraved bronze cross announcing "Pax", or peace.  Two thousand tons of Italian marble were used in the building; sixteen stained glass windows told the story of the Virgin Mother, and fifteen Italian mosaics represented the Stations of the Cross.

The development of the building was regularly reported in the paper, and its opening was greatly anticipated.  Archbishop Thomas Molloy presided over the dedication mass in August 1951.  7,000 of the 12,000 parishioners came that day.  By the end, the price tag had risen to over $2,000,000, much of it supplied by the parishioners.  But there was still one more feature to complete.

A large painting of the Virgin Mother and Child hung behind the altar, and hooks were installed for a special crown for Mary.  Instead of money, parishioners were to donate jewelry.  Many responded by giving family heirlooms and wedding bands, a thank you gift for the safe return of their loved ones from war.  So many gems were donated that two 18-carat gold crowns were produced, one for Mary and one for the baby Jesus.  They were estimated to be worth $100,000 and included 600 diamonds, rubies and sapphires.  In January 1952, the pastor, Father Cioffi, flew

to Rome to have them blessed by Pope Pius XII in a private ceremony.  A coronation was held at Regina Pacis in May, making the shrine of peace complete.

One week later, during a wedding, Father James Russo noticed something strange.  A six-inch hole had been cut into the gate that protected the altar painting.  And the security system was off.  Someone had stolen the crowns.

The people of Regina Pacis were horrified.  The crime made the front page of the Eagle, and Time magazine reported the theft, making it a national story.  Parishioners started a collection to replace the crowns.  Brooklynites wrote editorials in the paper calling the thieves immoral.  The children of St. Rosalia's school prayed each morning for the return of the crowns.  A symbol of peace in post-war America had been taken away, and no evidence had been left behind.

And then, after eight days, a mysterious package arrived at the rectory.  Inside were the crowns, almost perfectly intact!  Father Cioffi burst into the 10 a.m. mass the next day and announced their miraculous return.  Parishioners were overwhelmed:  some applauded, some prayed, some cried, and three fainted. 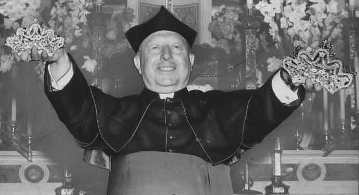 But who had taken them?  And who had returned them?  Had the thief felt the pangs of guilt?  Or did someone else find them and return them?  The Eagle announced the return of the crowns on the front page of the newspaper with three large photographs.  But instead of the headline announcing the return of the crowns, it read:  "SHRINE GEM THIEVES HUNTED."  The people wanted answers.

Only one lead was ever reported in the paper.  During the eight days, Ralph Emmino a 22 year-old jewel thief with suspected mafia ties was found shot to death on the side of the road in Bath Beach.  Many suspected that Emmino had either taken more than his fair share in a group crown heist or had been punished for stealing from a church -- an off-limits zone for mob business.  Other leads developed from there: one man reported seeing Emmino's car in the parking lot the night of the crime, and another claimed that two mysterious men asked him to deliver "a package" to Regina Pacis the day before the crowns appeared in the mail.  The Eagle reported that Catholic churches in Brooklyn refused to give Emmino, a suspect in the public's eyes, a Catholic burial.  But no actual evidence was ever found beyond the package itself.  The case remains unsolved.

As for the crowns, a second coronation was held in July.  A new security system and a night watchman were also installed.  Father Cioffi asked everyone to give thanks for the return of the crowns and to remember that forgiveness was important.  And with that, the people of Regina Pacis moved on... finally at peace. 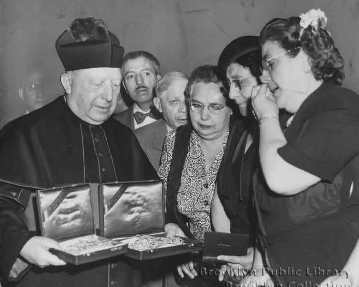 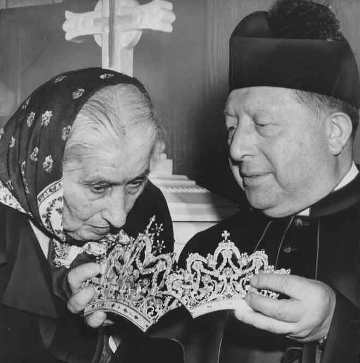