"Whether your Thanksgiving holidays mean a gathering of the relatives, the arrival of the college set or just the usual family circle, it's wise social strategy to be prepared for informal entertaining."  Margaret Pettigrew, Eagle Staff Writer

Most people groan when they have to conduct research on microfilm machines.  I love it.  Sure, it makes you a bit queasy and it is hard to walk in a straight line once you've finished, but it is well worth it in my opinion.  I am fascinated by recipes from the early twentieth century.  And the Brooklyn Daily Eagle does not disappoint when it comes to recipes that grandmothers in Brooklyn once clipped and followed.

The Brooklyn Public Library has the full run of Brooklyn's newspaper, the Brooklyn Daily Eagle, on microfilm from 1841 -1955 (1841-1902 can also be found online).  Imagine having a tin of recipes from the early 1900s through 1955 sitting on your kitchen counter top!  By searching the microfilm for recipes, you can!  (There are also entire recipe books in the Eagle Libraries series--but that's another post...) The Brooklyn Daily Eagle included recipes and food commentary in many issues.  You can also research the price of food: in Brooklyn in 1941, for example, turkey cost 37¢ per pound.  Today, I pay $2.90 per pound for a grass fed, humanely raised and killed bird.  The royal bird, as Pettigrew calls it, is worth every cent. 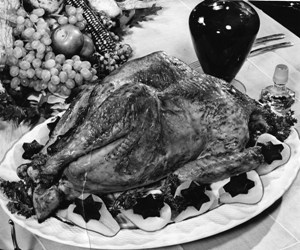 If you don't already have a menu planned for this year's Thanksgiving, this looks like a tasty suggestion.  Here is the recipe that Ms. Pettigrew used from the kitchen of Mrs. Florence Phillipson for turkey and stuffing:

The image shows the turkey garnished with a lovely assortment of poached pear halves and I'm assuming, cranberry jelly molded into festive stars.  Just a touch of parsley for added green and voilá! an eye catching presentation for your Thanksgiving feast.