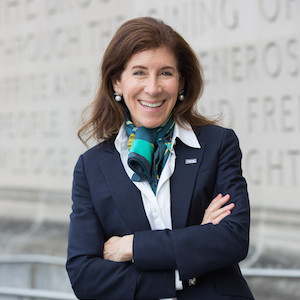 As president and CEO of Brooklyn Public Library, Linda E. Johnson leads one of the nation’s most historic and most innovative library systems. Founded in the late nineteenth century, BPL serves more than one million patrons in 59 locations; one-quarter of its branches are more than 100 years old. The Library is one of the largest publicly-funded civic institutions in New York City, with an annual operating budget of $119 million and a physical plant of more than one million square feet. Its annual attendance, 8.7 million in 2016, nearly equals that of the city’s eight professional sports franchises combined.

Linda has overseen the transformation of BPL from an analog to a modern library with state-of-the-art technology available for free to all patrons, including the 33% of Brooklyn residents who do not have internet access at home. Brooklyn Public Library has become the borough’s largest provider of free wireless internet and has invested in more than 1,500 laptop and desktop computers that are available for free to the public. Linda and her team have worked with the Library’s partners in the public sector to ensure that each branch has a baseline level of technology, with at least one full-time staff member dedicated to helping patrons access the Library’s digital programs and equipment.

Under Linda’s leadership, the Library’s presence and impact in the community have expanded beyond the confines of its 59 branches. BPL now hosts collections at nearly 200 off-site locations and provides services in 552 outreach sites, including schools, homeless shelters, senior centers and correctional facilities. The Library’s Outreach Services Department, founded in 2013, has developed new and nationally recognized resources for immigrants, seniors, veterans, the incarcerated, the homebound and other vulnerable or marginalized patrons. In 2016, Brooklyn Public Library was awarded the nation’s highest honor for libraries, the Institute for Museum and Library Services’ National Medal, in recognition of its extraordinary community outreach.

In 2015, Brooklyn Public Library joined its sister systems, the New York Public Library and Queens Library, in advocating successfully for increased funding from the city to provide citywide six-day library service for the first time in a decade. Along with its increased hours, BPL was able to hire nearly 100 new librarians and devote more resources to the maintenance of its four-million-item collection. The Library’s private fundraising has increased steadily under Linda’s leadership, and she has streamlined BPL’s operations through initiatives such as BookOps, a partnership with New York Public Library to consolidate collections management operations and provide faster, more dependable service to branches and patrons.

Prior to being named president and CEO of BPL in August 2011, Linda served as president and CEO of the National Constitution Center, CEO of the Free Library of Philadelphia Foundation and president of JCI Data, a privately held information services and database management provider. She sits on the executive committees of Hamilton College, Sing for Hope and the Curtis Institute of Music and is an advisory director on the board of the Metropolitan Opera.

Nick Higgins is the Chief Librarian at Brooklyn Public Library in charge of public service across Brooklyn. In concert with other members of the senior management team Nick leads the leads the development of transformative library services and spaces for the residents of Brooklyn.

In his previous role as Director of Outreach Services for BPL, Nick and his team created a suite of unique programs for older adults, individuals and families impacted by the justice system, immigrants, and people experiencing homelessness. Nick began his career in 2006 at BPL as a librarian trainee and worked in several branches, the Inclusive Services department, the Business & Career Library, and the Central Library. Nick also served for three years as the NYPL Correctional Library Supervisor. In 2017 Nick was named “Mover and Shaker” by Library Journal for creating a citywide library-based video visiting service for kids with parents incarcerated on Rikers Island. He received an MLS from the Pratt Institute and a BA in British Literature from Hunter College.

Karen’s previous work as the CFO and CAO of the New York County District Attorney’s office had her overseeing the Office’s Criminal Justice Investment Fund, an $800 million initiative to invest in law enforcement improvements, criminal justice system reform, and community- based crime prevention programs. Prior to the District Attorney’s Office, Karen served as the Assistant Director at the New York City Office of Management and Budget, where she was responsible for fiscal oversight of New York City’s 22 criminal justice and regulatory agencies, including the New York City Police Department and the City’s six District Attorney offices. Karen earned her bachelor’s degree from Binghamton University, State University of New York and her master’s degree in public policy from the University at Albany.

David Woloch joined Brooklyn Public Library as executive vice president of external affairs in 2012 after a distinguished career in city government. David oversees the Library’s government and community relations, development, marketing and communications departments. He and his team have succeeded in increasing the institution’s operating and capital budgets through increased investment from the city and from private donors. As a result, all public libraries in Brooklyn are now open at least six days per week and are offering more programs to more people than at any point in the Library’s recent history.

David served in a variety of positions in city government, most recently as a deputy commissioner with the Department of Transportation, a post he held for 12 years. He earned a bachelor’s degree in history from Cornell University and a Master of Public Policy degree from Harvard University’s John F. Kennedy School of Government.

David Giles joined the library in 2015 as chief strategy officer, overseeing Brooklyn Public Library’s strategic initiatives and partnerships, including the development of a new vision and action plan for the Library. Giles helped to design and launch the BKLYN Incubator, an innovation fund and support system for library-community partnerships.   Named a 2016 “Mover and Shaker” by Library Journal, Giles has written and spoken widely on the changing role of libraries in the 21st century information economy. While at the Center for an Urban Future, a Manhattan-based public policy think tank, he was the lead author of Re-Envisioning New York's Branch Libraries, a detailed report on the capital needs of New York's over 200 branch libraries, and Branches of Opportunity, a report about the role public libraries are playing in education and community development.

David has an MA from the University of Chicago and a BA from Boston College.

Prior to joining BPL, Lester Kenton served as the director of strategic communication at the New York City Department of Transportation, initiating the agency’s social media presence, overseeing all agency public street safety campaigns and serving as an active member of the committee which crafted the City’s first social media policy.

Lester Kenton attended Syracuse University, earning a bachelor’s degree in television radio and film. She earned an MA in sociology at the New School for Social Research.

Prior to joining the Library, Mayers spent a decade leading non-profit start-ups like Room to Grow, an organization that helps parents enrich the lives of children born into poverty, and Cool Culture, which makes it possible for families from Head Start and city-funded childcare centers to visit New York City's premier cultural institutions.

Lexy graduated from Harvard College and holds an MBA from the Yale School of Management. She serves on the boards of the BRCA Foundation and Brooklyn Community Housing and Services.

Laszlo Jakab Orsos joined the Library in 2016 as vice president of arts and culture. In this role, he both sets the strategic vision for and curates arts and cultural programming.

Previously, Jakab was the director and curator of the PEN World Voices Festival of International Literature, one of the world’s largest literary gatherings with more than 100 writers and several dozen events in New York City.

Before arriving in New York, Jakab had a career in Hungary and throughout Europe as a writer, scriptwriter and creative writing instructor. He co-wrote The District; the film was awarded best feature at the Annecy International Animation festival in 2005.

Jakab is an advisory board member at Human Rights Watch and Creative Time, a New York-based public art organization.

Selvon earned a degree in electrical engineering at Polytechnic University. He is a member of the American Library Association and of the National Society of Black Engineers and serves on the board of St. Mark’s Day School. Smith began his career at the library working part-time in the literacy department.

LaChonne Walton joined Brooklyn Public Library in 2018 as the vice president of human resources. Prior to joining the Library, she led HR departments at premier nonprofit institutions including ITHAKA, Jazz at Lincoln Center and Amnesty International USA.

LaChonne has more than 25 years of industry experience and is a steering committee member for the New York Cultural Institutions Human Resources Group and a former board member for the Morningside Center for Teaching Social Responsibility in New York. She has a BA from Long Island University and is certified by the Society for Human Resources Management as well as the Management Research Group for Strategic Leadership Development.

Chloe Wasserman joined Brooklyn Public Library in 2009 as general counsel. She is responsible for advising the board of trustees, CEO and staff on all legal issues involving the organization, as well as managing litigation and regulatory matters. She also works on board and library policies, providing counsel on matters of governance.

Prior to joining the Library, Chloe worked as outside counsel for not-for-profit organizations including the Library and the Brooklyn Botanic Garden. She also practiced in the litigation department of the law firms Proskauer Rose, LLP and Anderson Kill.