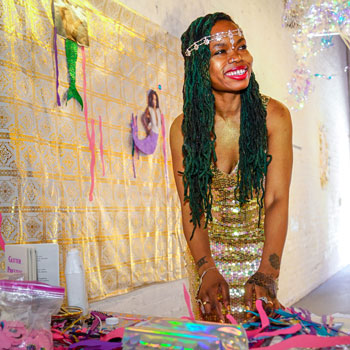 Damali Abrams, A.K.A the Glitter Priestess, is a New York City based artist, educator and reiki practitioner. Her collages, videos, performances, workshops and writings create portals, cast spells, and work to manifest forms of Black Utopia. Damali attended the Whitney Independent Study Program and earned her MFA from Vermont College of Fine Arts and her BA from NYU.

Damali is a recipient of the 2019 Queens Council on the Arts New Works grant. She has been a fellow at Culture Push, the Robert Blackburn Printmaking Workshop, A.I.R. Gallery, and apexart in Seoul, South Korea. Damali has also been Artist-in-Residence at Fresh Milk in Barbados, Groundation Grenada, The Center for Book Arts, Jamaica Center for Arts & Learning (JCAL), and LMCC on Governors Island.

Ralph Farris (viola), Kip Jones (violin), Dorothy Lawson (cello), and Corin Lee (violin). Established in New York City in 1998, ETHEL quickly earned a reputation as one of America’s most adventurous string quartets. 20 years later, the band continues to set the standard for contemporary concert music. Known for its enlivened playing, blending uptown, conservatory musicianship with downtown genre-crossing, ETHEL has been described as “indefatigable and eclectic” (The New York Times), “vital and brilliant” (The New Yorker), and “infectiously visceral” (Pitchfork). Since its inception, ETHEL has released nine feature recordings (one of them nominated for a Native American Music Award), performed as guests on 40+ albums, won a GRAMMY® with jazz legend Kurt Elling, and performed in 14 countries, 45 states, and 250 cities. At the heart of ETHEL is a collaborative ethos – a quest for a common creative expression that is forged in the celebration of community. In addition to premiering 21st century works by a broad range of groundbreaking composers, the quartet creates and tours rich, often multimedia, productions in which community engagement is a key element. 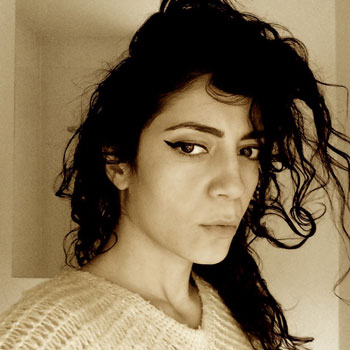 Maryam Monalisa Gharavi is an artist, poet, and theorist whose work explores the interplay between aesthetic and political valences in the public domain. Solo and group exhibitions, performances, screenings, and expanded publications include Nottingham Contemporary, Pioneer Works, Serpentine Cinema, Framer Framed, Townhouse Gallery of Contemporary Art, Museum of Fine Arts Boston, Art Dubai, New Museum, Parasol Unit, Pacific Film Archive, Sonic Acts, Triple Canopy, Experimental Media and Performing Arts Center, The Poetry Project, Women and Performance, The White Review, Art in America, The Literary Review, Asymptote, among others. She has served as Artist-in-Residence at Aftab Committee (Washington, D.C.), Wysing Arts Centre (U.K), Industry Lab (U.S.A.), Delfina Foundation (U.K.), Darat al Funun (Jordan), Mansion (Lebanon), Residency Unlimited (New York), and Recess (New York). She completed a Ph.D. in Comparative Literature and Film & Visual Studies at Harvard University and an M.F.A. in Film/Video at Milton Avery Graduate School of the Arts at Bard College, and held a postdoctoral Fulbright and Visiting Professorship at Birzeit University. She was Lecturer in History & Literature at Harvard University from 2012 to 2017, and has served as a visiting studio artist at New York University, Valand Academy, Cambridge School of Art, Anglia Ruskin University, Sandberg Instituut, among others. Book publications include a translation of Waly Salomão’s Algaravias: Echo Chamber (Ugly Duckling Presse), nominated for a 2017 PEN Award for Poetry in Translation; The Distancing Effect (BlazeVOX); Apparent Horizon 2 (Bonington Gallery); Alphabet of an Unknown City (Belladonna*); Bio (Inventory Press); and in 2019, Secret Catalan Poem (The Elephants) and Mohammad Wikipedia Book. She was editor at The New Inquiry between 2012 and 2017, and is author of the open text South/South. She lives and works in New York. 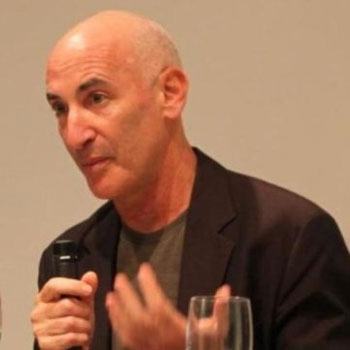 Jonathan Kirschenfeld , founder and principal of the firm Jonathan Kirschenfeld Architect PC is internationally recognized for design excellence over a wide range of environmentally- and socially-sustainable projects. The firm has exceptionally strong credentials in the areas of urban housing, childcare centers, and recreation and performance facilities. Mr. Kirschenfeld and his firm were recently recognized as a 2017 Social Design Circle Honoree by the prestigious Curry Stone Prize. He was the recipient of the inaugural 2014 HH Richardson Award for Public Architecture given by NY State Chapter of the American Institute of Architects, and the firm's supportive housing work has been recognized by the NYC Chapter of the American Institute of Architects with the 2013 Andrew J. Thomas "Pioneer in Housing" Award. Aside from his role as principal, Mr. Kirschenfeld lectures widely and is Adjunct Associate Professor at Columbia University's Graduate School of Architecture Planning and Preservation. He was Visiting Professor at the University of Bologna in 2012-13, and has taught at Pratt Institute and New Jersey Institute of Technology. Mr. Kirschenfeld has been twice selected as first-alternate for the Rome Prize, and is Founder of the Institute for Public Architecture (IPA), a not-for-profit organization on the forefront of social impact design.

Suzanne Maria Menghraj is an essayist whose work has focused primarily on art and wilderness. A former contributing writer for Guernica, which published “In Praise of Failure,” her translation of the introduction to Pierre Bayard’s Comment améliorer les œuvres ratées? (How to Improve Failed Works), Suzanne's recent writing has appeared in Punctuate, Writing on the Edge, and Flyway: A Journal of Writing and Environment. Her essay “Usciolu” was awarded a Flyway prize for nonfiction. She teaches writing and critical creative production in the Liberal Studies Core Program and Global Liberal Studies at New York University, where her courses emphasize imaginative approaches to critical reading and writing. NYU granted her the 2018-2019 W.E.B. Du Bois/Angela Davis Faculty Award for oustanding commitment to diversity, equity, inclusion, and social justice. Prior to joining NYU’s faculty, she taught at Columbia University and served as director of Columbia’s Writing Center and assistant director of its Undergraduate Writing Program. Earlier in her career, she worked in the consulting division of the Vera Institute of Justice. She has since collaborated with several justice institutions, as well as such arts organizations as the Center for Urban Pedagogy, the Bronx Museum of the Arts, the Metropolitan Museum of Art, and Palazzo Strozzi. Suzanne grew up in the Bronx and in Queens. Though her teaching has often brought her for long stretches of time to NYU's Florence, Italy campus, Brooklyn has been her home for over twelve years. Her family hails from Trinidad, a place that often figures in her work.