In January 2017, a new piece of art was installed at the intersection of Flatbush Avenue and Tillary Street, at the entrance to the Manhattan Bridge. Two snow-white resin sculptures representing “Miss Brooklyn” and “Miss Manhattan” were hoisted above the busy street traffic on two slowly rotating “Lazy Susans” supported by a stem-like post. Now, as they steadily revolve in opposite directions, they enjoy a 360 degree view of the area from whence they were banished nearly 60 years ago.

The original “Miss Manhattan” and “Miss Brooklyn” were not rotating. Once upon a time, they were firmly planted near the granite pylons at the Brooklyn approach to the Manhattan Bridge. 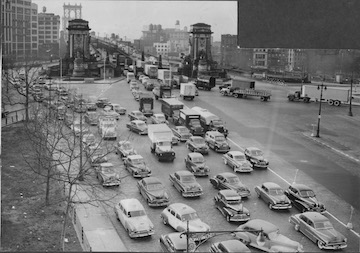 The Manhattan Bridge, the youngest among the three bridges connecting Manhattan and Brooklyn, was opened on December 31, 1909. It was built to alleviate the traffic load of the Brooklyn and Williamsburg Bridges.  Unlike its immediate neighbor, the legendary and much beloved Brooklyn Bridge, the Manhattan Bridge was sort of a stepchild in the public imagination. With its eight lanes for train, horse-drawn and automobile traffic, it was designed to be a muscle, a working horse, a purely utilitarian structure. However, it caught the attention of the City Beautiful movement, and the Carrère & Hastings architectural firm was engaged to beautify the approaches to the bridge on both sides.

The City Beautiful Movement was a reform philosophy in architecture and urban planning that flourished in the United States in the late 19th-early 20th century. The founding idea of this movement was that the introduction of beautification and grandeur to urban planning elevated the spirit of the citizenry, promoted social harmony and helped increase the quality of life. The City Beautiful movement was never particularly strong in New York City though; its biggest mark was made in Chicago, Cleveland and Washington, D.C.  However, it is credited with interfering on behalf of the homely Manhattan Bridge.

Carrère & Hastings introduced its design in the Beaux-Arts style in 1910 and the plan was not only approved, but also lauded as the most artistic treatment of a bridge entrance attempted on this continent.

The Manhattan end of the bridge featured a Beaux-Arts plaza with its signature arch and colonnade.  The arch was modeled after Porte St. Denis in Paris, and the colonnade after Bernini's famous colonnade that encircles St. Peter’s Square in the Vatican.

Arches were very popular in those days. The Manhattan Bridge arch is one of only three remaining in the city now (the other two are the Soldiers’ and Sailors’ Arch on Grand Army Plaza in Brooklyn and the Washington Square Arch in Manhattan.)

The arch’s pylons are decorated with high reliefs by Carl Augustus Heber.  Two winged figures, female and male, represent “The Spirit of Commerce” on the left and “The Spirit of Industry” on the right. The “Buffalo Hunt” frieze by a celebrated sculptor Carl C. Rumsey is set in the center of the arch, just beneath the cornice. 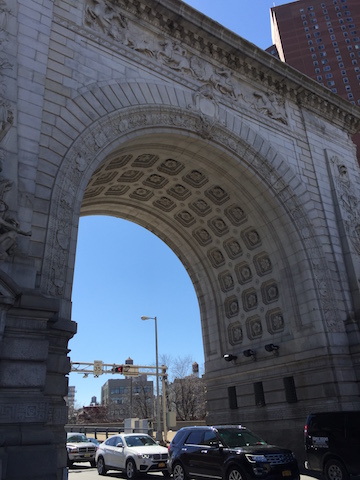 The Arch with the Buffalo Hunt frieze by C.C. Rumsey. Photo by author. 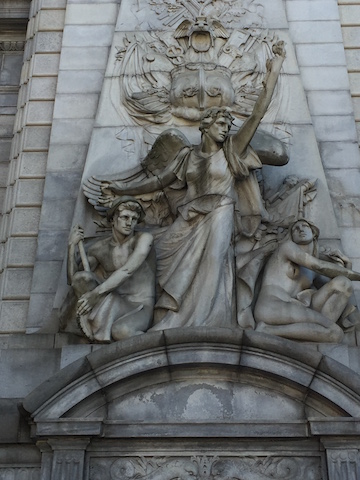 "The Spirit of Industry" by C. A. Heber. Photo by author.

The Brooklyn gateway to the bridge was markedly more modest. It featured two white granite pylons, each guarded by allegorical female figures known as “Miss Manhattan” and “Miss Brooklyn” installed in 1916. The sculptor responsible for them was none other than Daniel Chester French, best known for his statue of Abraham Lincoln in the Lincoln Memorial in Washington, D.C.

“Miss Manhattan” and “Miss Brooklyn” each weigh 20 tons, measure 12 feet tall and are made of granite, and the same model was used for both figures. This is where the similarities end.

“Miss Manhattan” sits haughtily with her right foot atop a chest of money (or jewels?); in her right hand she holds a winged globe reminiscent of a cross-bearing orb, an ancient symbol of authority; a peacock, flashiness and luxury incarnate, is by her side. (The peacock, in the belief system of the Ancient Greeks, also represented immortality/eternity.) The bows of three ships hint at the status of Manhattan as an important port and an international trade hub. She is all dignity, privilege and hubris. (Apparently, an original design for Miss Manhattan also included a royal crown, but it was overruled by the Bridge Commissioners as smacking of imperialism.) 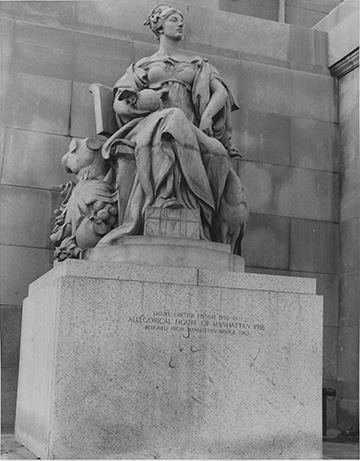 Miss Brooklyn’s demeanor could not be more different. Her expression is gracious, introspective and calm; she is surrounded by a church spire (Brooklyn to this day counts more houses of worship than any other borough); a lyre and a child with a book (a reference to the borough’s patronage of culture and education). The book on the child’s lap is massive. It must be a Bible, another reference to the borough’s spiritual thrust. Her head is adorned with a laurel wreath. In her hands she holds a tablet with the Dutch inscription “Ein Drach Mackt Maght” (“In Union there is strength”), a hint at the Dutch origins of Brooklyn and at the fairly recent New York City consolidation of 1898. 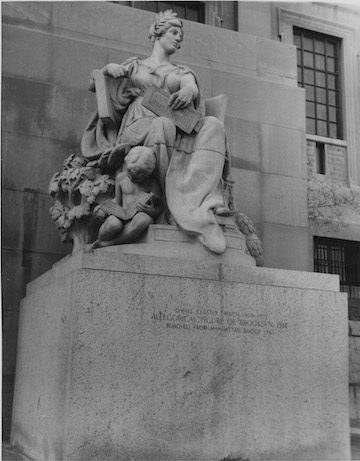 The model for the pair was the legendary Audrey Munson who is considered to be America’s first supermodel. She posed for many famous sculptors and photographers. For Daniel Chester French alone, she modeled twelve times. Incidentally, she was also used as a model by C.A. Heber when he created “The Spirit of Commerce” for the Manhattan side of the bridge.

Meanwhile, the years went by, and the Manhattan Bridge continued to be a “poor relation” to the Brooklyn Bridge. Despite heavy use and an apparent design flaw, the bridge suffered from neglect and irregular inspection and maintenance and in the end required several costly repairs. Its slow aging coincided with the rapid growth of private car ownership and increased flow of traffic.

Enter Robert Moses and his ambitious plans for dramatic restructuring of the city’s thoroughfares. Robert Moses, to this day, remains one of the most polarizing and controversial figures in the history of New York City. He became a major force in the city's planning in 1924 and remained unstoppable for some forty-four years. Under his supervision, New York and its environs acquired, among other things, a functional system of parkways, highways, bridges and parking spaces which accommodated the ever growing fleet of personal and commercial vehicles. For all the good he has done for the city (he is credited with building, throughout his career, 13 bridges, 416 miles of parkways, 658 playgrounds, and 150,000 housing units across all boroughs of the City of New York and surrounding areas), his legacy is tainted by his overt racism and deliberate planning that marginalized minorities. He is also responsible for the destruction of several city landmarks, such as the original Penn Station in Manhattan and Ebbets Field stadium in Brooklyn. 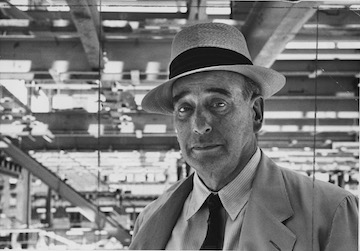 The Manhattan Bridge – forever in need of an upgrade – had the bad luck of finding itself in Moses’ way.

The early 1960s marked the beginning of the end of Moses’ career when his plans started to meet with more and more resistance from city officials and citizens. As a result, three of his bombastic, larger-than-life crosstown projects were among the few that he was not able to push through. Had one of them, the Lower Manhattan Expressway, also known as “Lomex”, succeeded, we would have lost the Manhattan-side entryway to the bridge. During the reconstruction in the early 1960s two decks were reinforced to be able to carry trucks weighing up to twenty tons. Another level was designated for cars only. The approaches were to be reconstructed to provide access on the Manhattan side for the newly projected Lower Manhattan Expressway and on the Brooklyn side for a new interchange with already existing Brooklyn-Queens Expressway.

In 1961 Moses filed a request with the Arts Commission of the City of New York for permission to remove and destroy both entryways to the bridge. That would mean the loss of all art - architectural and sculptural - which had been adorning the entryways for nearly 50 years. In his application he described it as “ornamental and architectural masonry”. One of Moses’ arguments was that art created a distraction for motorists. A public outcry immediately followed. Preservation advocates cited the commission paid by the city to the creators of these artifacts: Rumsey received $15,000 for the “Buffalo Hunt” frieze (worth $335,000 in 2017 money); Heber, $10,000 for his winged allegorical reliefs ($225,000); French, $8,000 ($180,000) for each of his sculptures.

The Arts Commissioners were also reluctant to grant the permission and they pushed the vote back in order to find an art institution willing to take custody of this “masonry.” The Brooklyn Museum stepped forward. It expressed interest in accepting the two “Misses” and the Rumsey frieze.

Eventually, the plans for Lomex were scrapped and the Manhattan-side entryway narrowly escaped destruction. It was eventually landmarked (in 1975) and underwent renovation in 2000.

The two granite maidens were removed from their original location and installed by the entrance of the Brooklyn Museum in 1964. Upon inspection, they were deemed to be in decent shape and required only a thorough cleaning.  Their new home happened to be a fitting place for the work of Daniel Chester French, since his sculptures - allegorical figures of Greek Epic, Greek Lyric Poetry and Greek Philosophy, as well as the pediment – had already graced the museum’s façade. (Another piece of art produced by Daniel Chester French in Brooklyn, the Alfred T. White Memorial, can be found in the nearby Brooklyn Botanic Garden.) 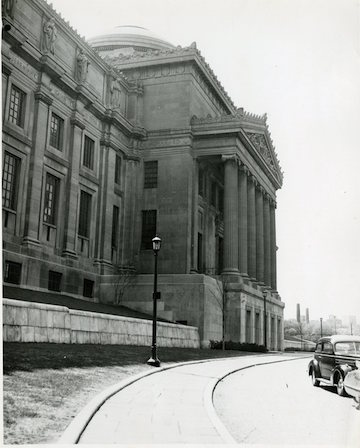 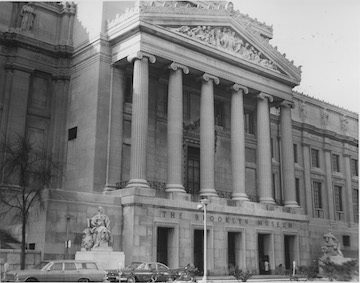 The new renditions of Miss Manhattan and Miss Brooklyn are created by Brian Tolle, famous for his Irish Hunger Memorial in Manhattan. Serett Metalworks company is responsible for the monument’s “hardware”, the post and pivoting platforms.