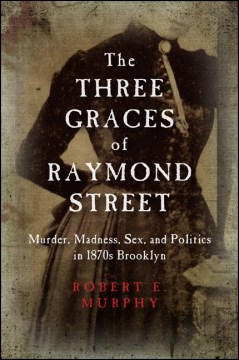 "A compelling story about three murders in Brooklyn between 1872 and 1873 and the young women charged with the crimes. Between January 1872 and September 1873, the city of Brooklyn was gripped by accounts of three murders allegedly committed by young women: a factory girl shot her employer and seducer, an evidently peculiar woman shot a philandering member of a prominent Brooklyn family, and a former nun was arrested on suspicion of having hanged her best friend and onetime convent mate. Two were detained at the county jail on Raymond Street, while one remained at large, and her pursuit and eventual arrest was complicated by dissension in the police department. Lawyers for all three women prepared insanity defenses, and citizens thronged the courtrooms to witness the suspenseful trials. An intriguing account of the events surrounding the cases, which became entwined with Brooklyn's politics and religious differences, The Three Graces of Raymond Street offers insights into the sexual mores of the times and illustrates the development of the modern American city; 'Robert E. Murphy has done a wonderful job recreating the lost city of Brooklyn in the years following the Civil War. Through the stories of three women jailed for murder, he brings to life the personalities and places--and scandals--that made Brooklyn a vibrant, vital place. This is a terrific read'--Terry Golway, author of Machine Made : Tammany Hall and the Creation of Modern American Politics"--From publisher's website.

Hang tight! This may take a minute...

When the item is ready for pickup, we will notify you. You can place 5 more physical holds. *Note: there is a one minute delay before this hold will be available to edit in My Account.

You will receive an email when your hold is available. You can place 5 more digital holds.

This item is now checked out to you!

This item can now be accessed in your checkouts.

Someone just beat you to this checkout! Would you like to place a hold on this item?

Your item has been renewed!

This item is now due on . You will be notified when your due date approaches.

Your item has been returned!

Your hold has been removed.

Your hold has been frozen. You will no longer move up the hold queue. You can unfreeze your hold at any time.

Your hold has been unfrozen. You will now move up the hold queue as items become available!

Your hold location has been updated!

Are you sure you would like to return this checkout?

This record has volumes associated with it. Please select a volume to continue.

Are you sure you would like to delete this item from your checkout history? This action cannot be undone.

Are you sure you would like to delete all items from your checkout history? This action cannot be undone.

Enter a custom URL for your list. The url can only contain lowercase letters and dashes.

Brooklyn Public Library's card is free for anyone who lives, works, pays property taxes or goes to school in New York state.