Due to the COVID-19 pandemic, all BPL locations are closed until further notice. Learn more at bklynlibrary.org/coronavirus.

Join Jarrett J. Krosoczka as he reads from his young adult graphic memoir, HEY, KIDDO. After the reading, Jarrett will be joined on stage by National Ambassador for Young People's Literature Jacqueline Woodson to discuss writing, children's literature, and the saving power of creativity. 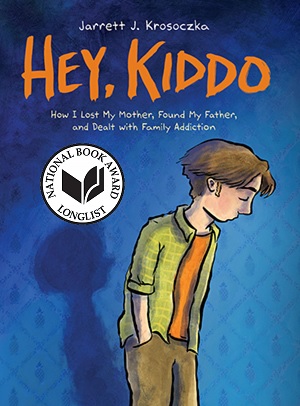 A true story about how complicated the truth can be.

In preschool, Jarrett Krosoczka's teacher asks him to draw his family, with a mommy and a daddy. But Jarrett's family is much more complicated than that. His mom is an addict, in and out of rehab, and in and out of Jarrett's life. His father is a mystery — Jarrett doesn't know where to find him, or even what his name is. Jarrett lives with his grandparents — two very loud, very loving, very opinionated people who had thought they were through with raising children until Jarrett came along.

Jarrett goes through his childhood trying to make his non-normal life as normal as possible, finding a way to express himself through drawing even as so little is being said to him about what's going on. Only as a teenager can Jarrett begin to piece together the truth of his family, reckoning with his mother and tracking down his father.

Hey, Kiddo is a profoundly important graphic memoir about growing up in a family grappling with addiction, and finding the art that helps you survive.

Copies of Hey, Kiddo will be available for purchase and signing courtesy of Stories Bookshop.